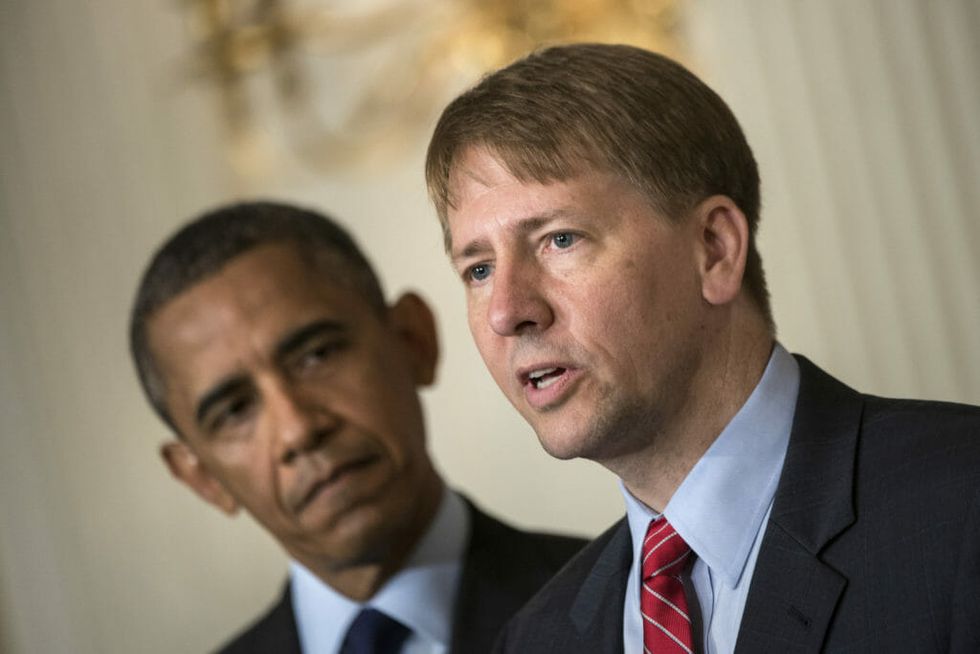 US President Barack Obama listens as newly sworn-in Director of the Consumer Financial Protection Bureau, Richard Cordray, speaks in the State Dining Room of the White House July 17, 2013 in Washington, DC. Obama spoke about the recent confirmation of Cordray, as the Director of the Consumer Financial Protection Bureau who was sworn in earlier today. AFP PHOTO/Brendan SMIALOWSKI (Photo credit should read BRENDAN SMIALOWSKI/AFP/Getty Images)

Senate Republicans, with Vice President Mike Pence breaking a 50-to-50 tie, voted Tuesday to strike down a new consumer protection rule. Five years in the making, it allowed millions of Americans to file class-action lawsuits against financial institutions.

By overturning the rule, Republicans dismantled a major effort of the Consumer Financial Protection Bureau (CFPB) under Obama appointee Richard Cordray. Congress created CFPB after deceptive or careless lending practices in mortgages led to the bailout of several major financial institutions. The Director of the CFPB is appointed by the sitting president, but serves a five year term independent of Executive branch changes.

The Consumer Financial Protection Bureau has broad authority and autonomy from the White House and Congress. CFPB enforces existing federal laws and writes new regulations, like the arbitration rule. That independence has rankled Republicans and other federal agencies.

The new rule written by the consumer bureau, set to take effect in 2019, restored the right of individuals to sue in court. Credit card companies and banks insert arbitration clauses into the fine print of financial contracts to bar people from pooling their resources in class-action lawsuits. Part of a spate of actions by the bureau, CFPB also cracked down on debt collectors, the student loan industry and payday lenders.

The Dodd-Frank financial law in 2010 mandated CFPB study arbitration, as arbitration clauses appeared in tens of millions of contracts. That effort produced a 728-page report, released in March 2015, that challenged longstanding assumptions about arbitration.

For decades, arbitration clauses derailed claims of financial gouging, discrimination in car sales, unfair fees, and deceptive business practices. More and more companies adopted the clauses. Today, mandatory arbitration is a condition of actions as diverse as opening a checking account, renting a car, getting cable service or checking a loved one into a nursing home.

Appointed by President Obama in 2012, Mr. Cordray’s tenure at the bureau is ending. Then President Trump will install his own appointee, a move expected to neuter one of the financial industry’s most aggressive regulators.

The vote was a win for a party struggling to deliver on its party's priorities. Last month, Senator Mitch McConnell of Kentucky, the majority leader, again failed to draw the support needed to overturn the Affordable Care Act, President Barack Obama’s signature health care law.

By voting to take rights away from customers. The Senate voted tonight to side with Wells Fargo lobbyists over the people we serve.”

The measure now heads to President Trump, who is expected to sign it.