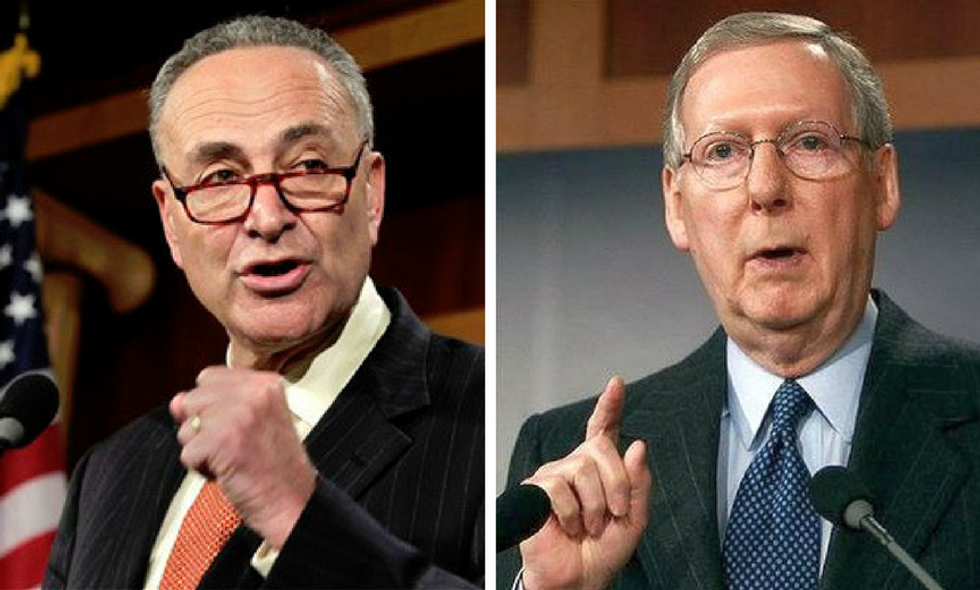 Democrats took to the floor of the Senate for hours Monday night to protest the fact that Majority Leader Mitch McConnell is writing the Senate's version of the American Health Care Act behind closed doors, in secret, with an all male Republican working group without a single committee hearing.

McConnell reportedly hopes to have a vote on the bill before Senators leave for their July 4th recess, which means a vote would have to be held next week, despite the fact that no one has seen the final language of the bill, the CBO has not scored it and not one committee hearing has been held.

Democrats have been railing against the secrecy for weeks. Monday night's talk-a-thon, with the unified call of "Show Us The Bill," was the Democrats' first organized effort to slow the process down and demand more transparency.

As Senator Schumer explained on the Senate floor Monday night:

"If Republicans are not going to allow debate on their bill on the floor or in committee, Democrats will make opportunities to debate. And these are merely the first steps we're prepared to take in order to shine a light on the shameful Trumpcare bill and reveal to the public the GOP's backroom deal-making."

Democrats began the night asking for unanimous consent for a variety of things from referring the bill to committee to posting the language of the bill online. To each request, Mitch McConnell said simply, "I object."

Democrats reminded their colleagues of the lengthy and transparent process with which the Affordable Care Act had been written and passed.

Then Senator Schumer asked McConnell to commit to more than 10 hours for Senators to read the bill and properly consider it.

McConnell would not even commit to that, saying only:

"I think we'll have ample time to read and amend the bill."

Senate Democrats echoed the call for a transparent process on Twitter.

There are 31 available rooms to hold a Senate hearing – what is the Senate GOP trying to hide? #Trumpcare… https://t.co/BGkgYGjtnm
— Senate Democrats (@Senate Democrats) 1497882014.0

Senate Republicans won't hold hearings on #Trumpcare or even agree to #ShowUsTheBill. What are they hiding?
— Tim Kaine (@Tim Kaine) 1497912324.0

You can watch the talk-a-thon at the Senate Democrats Facebook page.