Trump Couldn't Repeal Obamacare, So He's Trying to Limit Access to Healthcare for the Poor in Other Ways 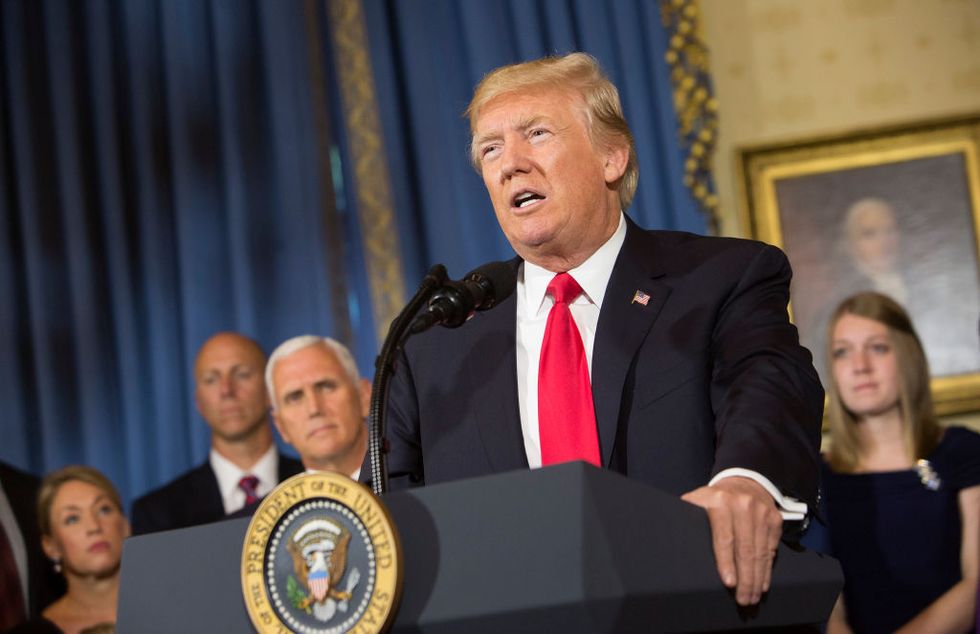 WASHINGTON, DC - JULY 24: (AFP OUT) U.S. President Donald Trump makes a statement on health care while standing with "victims of Obamacare" at The White House on July 24, 2017 in Washington, DC. (Photo by Chris Kleponis - Pool/Getty Images)

President Donald Trump has not been able to make good on his campaign promise to repeal the Affordable Care Act (ACA). But he’s determined to take health care away from Americans in other ways. After multiple attempts to repeal or replace the ACA, widely known as ObamaCare, failed in Congress amid massive public objection, no current plans to advance another bill are being considered. Instead, Paul Ryan (R-Wis.) has called for “incremental” health-care reform, which means the GOP will quietly erode the individual protections that collectively make up the ACA.

A provision hidden in the 2017 GOP tax bill repealed the individual mandate, a requirement that Americans who do not have coverage through an employer or government program buy insurance on a health care exchange or face a financial penalty. The individual mandate served two purposes: to bring younger, healthier people into health care pools to add financial stability to the program, and to reduce the number of uninsured people seeking care in emergency rooms at taxpayer expense. The repeal of ObamaCare’s individual mandate will cause 13 million fewer Americans to be insured in 2027, says the nonpartisan Congressional Budget Office (CBO).

The next target: Medicaid recipients. A provision under ObamaCare expanded Medicaid to low-wage workers whose employers who do not offer them insurance but who make too much money to qualify for state-sponsored health care. However, 18 states have refused to offer these protections to their residents, and now several red states are petitioning the federal government to lift this coverage requirement. The goal: To erode the number of people eligible for this last-resort health-care coverage option. Opponents of the provision claim it is expensive — and a step towards universal health care.

So far, two states — Indiana and Kentucky — have been granted permission to impose stricter work requirements on people who receive Medicaid. Now the GOP is planning to impose lifetime limits on the amount of time a person can receive Medicaid coverage. Five states have petitioned the government to treat Medicaid like welfare and put a time limit on how long an adult can receive health care coverage through the program. Welfare recipients may receive benefits for five years.

Arizona and Utah both want a five-year lifetime limit on coverage. Utah’s plan would come “with the expectation that they do everything they can to help themselves before they lose coverage,” according to the state’s waiver application. In Arizona, time-limited coverage would only accrue during months when enrollees don’t meet their work requirements, which the state is also seeking in their waiver application. Wisconsin wants to limit lifetime coverage for childless adults to 48 months. Kansas would limit coverage to 36 months.

In other states, the opposition to Medicaid expansion isn’t universal among the GOP, however. Terry Kilgore, a legislator from a rural district in Virginia, has called for his state to join the Medicaid expansion under ObamaCare. His constituents in the coal-mining district, which is being ravaged by an epidemic of black lung disease, have asked for help with health care coverage. "I'm not that far out on a limb,” he told Fredericks. “We have to step up, we can't be the party of 'no.'”

Health-care advocates in the state say that Medicaid expansion will provide health coverage to 240,000 uninsured Virginians, create 30,000 jobs and bring millions of federal dollars back into the state.

In addition, critics of the Trump administration’s plan to limit Medicaid coverage say that route will be expensive, and create an enormous administrative burden as states track individual recipients’ employment, eligibility and disability status. Losing coverage will also exacerbate health problems for people, making it even more difficult for them to find work.

In addition, low-wage workers who may not get health coverage through their jobs could also reach their Medicaid coverage limit “as if it’s their fault that their job isn’t offering insurance,” said Leonardo Cuello, director of health policy at the National Health Law Center. “And this would happen to thousands upon thousands of people across the country.”

Time-limiting health coverage also runs the risk of pushing sick people into costly emergency rooms where their care will be paid for by taxpayers. If they aren’t too sick, too old or too young, their only option will be to get a job that provides health insurance. But that’s about to get harder to find too.

The Trump administration is planning to eliminate ObamaCare’s employer mandate, which imposes a financial penalty on businesses with 50 or more employees that do not offer health coverage for their workers. Reps. Devin Nunes (R-Calif.) and Mike Kelly (R-Pa.) are pushing to have a suspension of the mandate included in an upcoming long-term spending deal March 22. According to the Kaiser Family Foundation, about half of Americans get coverage through an employer.

What happens if employees lose coverage from their employers and are ineligible for coverage through Medicaid? Well, there’s still the emergency room.

[The Trump administration still wants to take away your health care.]