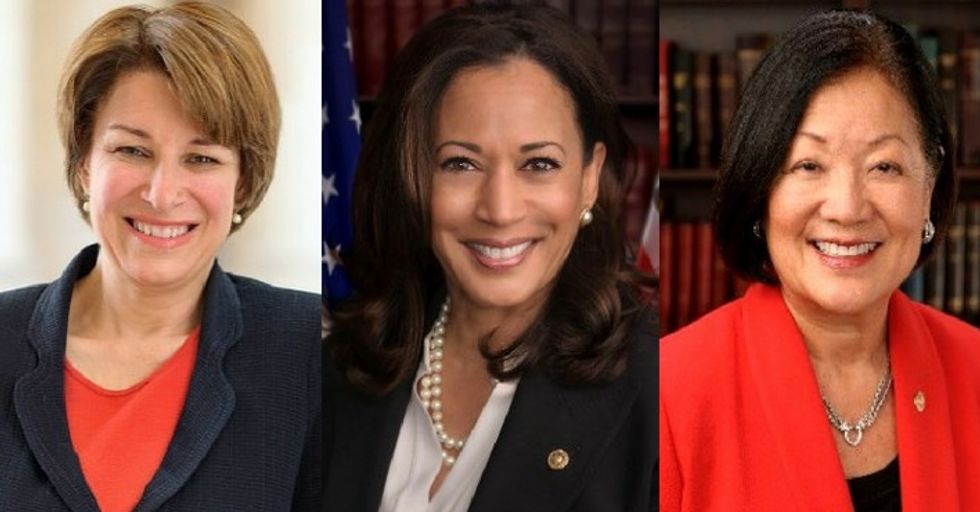 On Tuesday, President Donald Trump's longtime personal lawyer and fixer, Michael Cohen entered a plea deal with federal prosecutors which implicated the President as an unindicted co-conspirator. As a result, several Democratic Senators voiced their intention to not meet with Trump's Supreme Court nominee, Brett Kavanaugh, or voiced concerns about continuing the appointment process.

Now they made their objections formal.

All 10 Democratic members of the Senate Judiciary Committee submitted a letter to committee chair Republican Senator Chuck Grassley of Iowa. In it they cite Senate Rule XXVI (3) which governs committee procedures.

The full letter can be seen at the end of this article.

All 10 @JudiciaryDems: “Given the possibility of criminal wrongdoing by the President, doubts that Judge Kavanaugh… https://t.co/GzaEsny4gB
— Vanita Gupta (@Vanita Gupta) 1535128796.0

In a previous letter to Grassley dated August 16, three of the committee members questioned the lack of documents being released. "We have repeatedly expressed our serious concerns about the unprecedented lack of transparency and partisan process that is being used to hide Brett Kavanaugh’s record from the Senate Judiciary Committee, the Senate as a whole, and the American people," the letter begins.

They then contrast the records made available for Kavanaugh—less than 3 percent—versus the confirmation process for President Barack Obama pick Elena Kagan—where 99 percent of records were released.

The August 16 letter then refers to potential lies by Kavanaugh during his 2006 confirmation hearing that his full records would substantiate or repudiate. Limited records—publicly available on the Bush Library website—indicate Kavanaugh did not tell the truth during his 2006 Senate Judiciary hearing to become a Circuit Court Judge.

In this latest letter dated August 24, they raised the lack of transparency again. The letter begins:

"Over the past several weeks, we have voiced our concern about the decision to rush Brett Kavanaugh’s nomination through the Committee without allowing Senators or the American people to review his record."

"We are now writing to request a special meeting of the Committee under Senate Rule XXVI(3) to discuss the process being used to consider this nomination and requests for relevant documents."

However, in addition to the blocks placed on documents related to Kavanaugh's prior federal service, the 10 Senators raised another concern. In light of the President's former lawyer implicating him as an unindicted co-conspirator in a federal criminal case, the Democrats of the Judiciary Committee questioned Trump's fitness to nominate another judge for a lifetime appointment.

Of the President's own public record, they stated:

"Over a dozen of the President’s Cabinet members and senior aides have resigned, been fired, or withdrawn as a result of corruption, scandal, and allegations of criminal misconduct. Then on Tuesday, the President’s former campaign manager was convicted on eight criminal charges, for which he now faces up to eighty years in prison."

"Equally stunning, the President’s personal lawyer Michael Cohen pleaded guilty to eight criminal counts and stated, under oath, that the President directed him to commit a federal crime by violating campaign finance law."

"The lack of due diligence that candidate and President Trump has displayed in selecting advisors and judicial nominees should give every Senator pause. This nominee is being considered for a lifetime appointment to the highest court in the country."

"If confirmed, he will have the opportunity to rule on issues of critical importance to all Americans for the next several decades. He may also be called upon to decide whether this President should face investigation or possible indictment for criminal wrongdoing."

Kavanaugh concerned many after it was revealed he once wrote a law review article titled Separation of Powers where he titled the first section, in all caps:

In the article, Kavanaugh reasoned because being President took up a lot of time, a sitting President should never face an investigation or the consequences of any illegal activities while in office. The Senate Judiciary Committee Democrats addressed this issue as well in the following passage.

In their letter to Senator Grassley, the signatories stated:

"Importantly, there is no legitimate reason for the Senate to rush this nomination and fail to perform its constitutional duty. This is especially true, when the President, who faces significant legal jeopardy, chose the one candidate who has consistently and clearly expressed doubt as to whether a sitting president can be investigated or indicted for criminal wrongdoing."

"Given the possibility of criminal wrongdoing by the President, doubts that Judge Kavanaugh believes a president can even be investigated, and the unprecedented lack of transparency regarding this nominee’s record, we should not move forward with hearings on September 4th."

"Instead, we should have a special meeting of the Committee to discuss a bipartisan, fair, and transparent process for moving forward."