Trump's Lawyers Just Made a Questionable Argument for Why Congress Doesn't Have the Power to Investigate Trump, and People Are Rolling Their Eyes 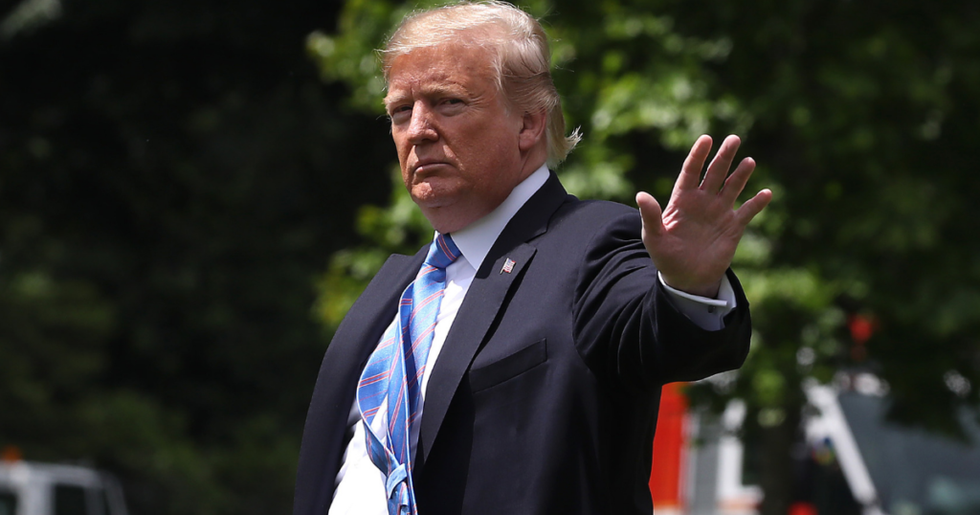 WASHINGTON, DC - MAY 14: U.S. President Donald Trump waves as he walks toward Marine One before departing from the White House on May 14, 2019 in Washington, DC. President Trump is traveling to Louisiana. (Photo by Mark Wilson/Getty Images)

The subpoena seeks to confirm testimony by Trump’s former lawyer Michael Cohen, who alleged that Trump over and under-inflated the value of his assets.

On Tuesday, Trump's lawyers proposed an ambitious challenge to Congress's authority to investigate the president in federal court.

William Consovoy, Trump's personal attorney, argued that the Constitution does not grant the House of Representatives law enforcement powers and that the multiple investigations in the House serve no legislative purpose.

“That is law enforcement,” Consovoy said. “Are you complying with federal law?”

US District Court Judge Amit Mehta asked Consovoy if a president could be investigated for corruption while in office, which Consovoy dismissed.

“I don’t think that’s the proper subject of investigation as to the president,” he replied.

What happened next is almost unbelievable.

Consovoy suggested that the Watergate and Whitewater investigations may have been unconstitutional.

“They were inquiring as to violations of criminal law,” Mehta said. “It’s pretty straightforward – among other things.”

So yeah, that happened.

If this seems ridiculous, that's because it is.

@bradheath So...only the executive branch can investigate the POTUS, but they can't actually DO anything to him/her… https://t.co/8ZsnLtIOzA
— A Well-drawn Dog (@A Well-drawn Dog) 1557864427.0

“His main client, President Trump, has taken the position really that Congress and particularly the House of Representatives is a nuisance and we’re just getting in his way when he’s trying to run the country,” Letter said. “The problem with that is that this is a total and basic and fundamental misunderstanding of the system that is set up by the Constitution.”

Trump's personal finances are "totally legitimate things for Congress to look into,” Letter said. “President Trump has no chance of success here on the merits of his claim."

"The President, Vice President and all Civil Officers of the United States, shall be removed from Office on Impeachment for, and Conviction of, Treason, Bribery, or other high Crimes and Misdemeanors."

But the president's lawyers are making the case that Trump is above the law.

@bradheath We are speeding down Authoritarian Lane and well on our way to Dictatorville.
— Henry Nachtman (@Henry Nachtman) 1557861041.0

@bradheath I had to read that a couple times to make sure he said what he said. That's effin' ballsy, and completely and totally incorrect.
— Candi McCann (@Candi McCann) 1557861343.0

@bradheath Constitution was based on level headed people governing the nation. But we are in the hands of people so… https://t.co/WFmFvk2JxG
— Holly Helscher (@Holly Helscher) 1557862924.0

@bradheath They are trying to dismantle The Constitution and our Democracy one little plank at a time, slowly, but… https://t.co/aFaPECuPdv
— TruthEzer (@TruthEzer) 1557864440.0

Mehta, unconvinced, hinted that precedent may not favor Trump's case because not since 1880 has a court found that Congress has abused its subpoena power.

Mehta agreed to fast track the case last week and gave both parties until Saturday to submit any additional information.

"The sole question before the court — Is the House Oversight Committee's issuance of a subpoena to Mazars USA LLP for financial records of President Donald Trump and various associated entities a valid exercise of legislative power? — is fully briefed, and the court can discern no benefit from an additional round of legal arguments," he said Tuesday.