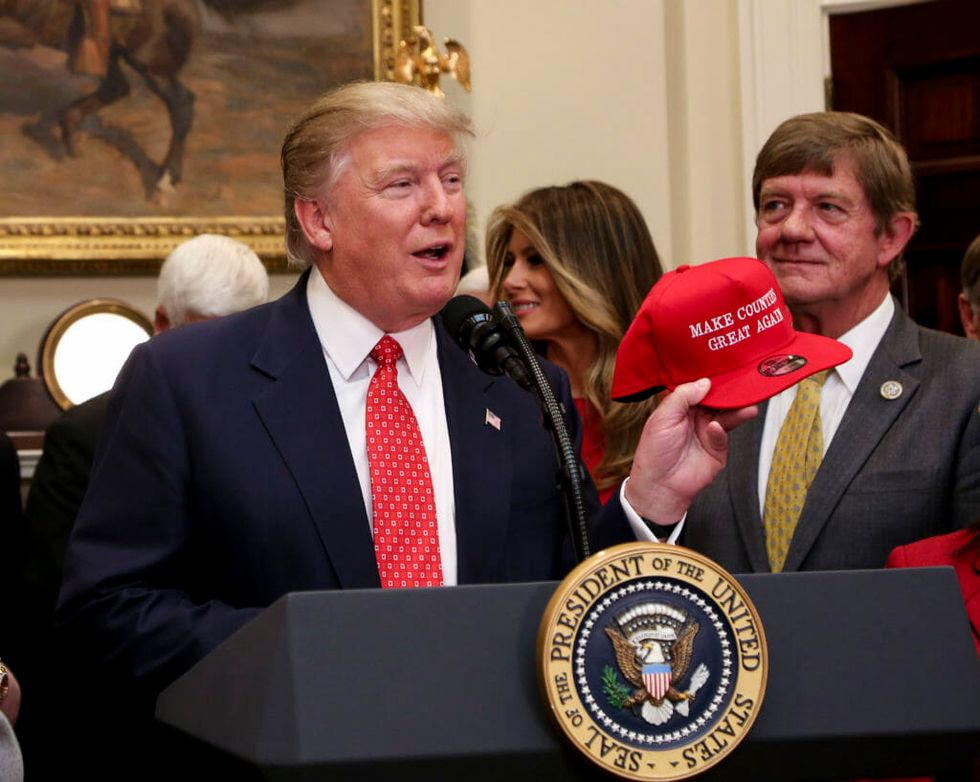 WASHINGTON, D.C. - FEBRUARY 28: President Donald Trump shows off a hat that says "Make Counties Great Again" before signing an Executive Order to begin the roll-back of environmental regulations put in place by the Obama administration February 28, 2017 in the Roosevelt Room of the White House in Washington, D.C. The Clean Water Rule, also known as WOTUS, the Waters of the U.S. rule, has been unpopular with some farmers, housing developers and energy companies. (Photo by Aude Guerrucci-Pool/Getty Images)

President Donald J. Trump’s surprise announcement that he will seek to impose tariffs on steel and aluminum imports sent shockwaves around the world yesterday and roiled the financial markets. Whether those tariffs get implemented is open to debate. Many believe the reality show theatrics with which he made the announcement were intended to distract from the accelerating scandals that are engulfing his White House.

But if he really intends to enact the tariffs, which are opposed by many in his administration, it shouldn’t come as a surprise. Trump campaigned on the promise of “America First” and many of his actions in the first year of his presidency have been designed to deliver on that campaign slogan.

When President Trump took the stage at the World Economic Forum in Davos, Switzerland, in late January he seemed to be intent on assuring the world that his “America first” domestic agenda was not a backhand slap at the United States’ international trading partners.

“I’m here today to represent the interests of the American people and to affirm America’s friendship and partnership in building a better world,” Trump said. “As President of the United States, I will always put America first, just like the leaders of other countries should put their country first also. But America first does not mean America alone.”

Other world leaders, however, are rejecting that notion and are moving forward on the premise that international trade no longer revolves around the United States. In Davos, 11 industrialized countries resurrected the Trans-Pacific Partnership (TPP), opting to move forward without the United States. One of Trump’s first Oval Office executive order signing ceremonies after he took office in January 2017 was to withdraw the U.S. from the pact – an effort that was begun eight years ago by the Obama administration.

Japan, Australia and New Zealand are leading efforts by the so-called TPP 11 to resuscitate the agreement, convinced it will lock in future free trade. Photo Credit: Mercopress

The deal, now known as TTP-11 is expected to be signed by the participating countries -- Australia, Brunei, Canada, Chile, Japan, Malaysia, Mexico, New Zealand, Peru, Singapore and Vietnam – on March 8 in Santiago, Chile. TPP-11 is widely seen as the clearest sign yet that U.S. influence in world trade is ebbing under Trump.

“Maybe there was some sort of presumption on the part of the president and his team that if the U.S. said stop, this process would come to a halt,” said Phil Levy, a senior fellow at the Chicago Council on Global Affairs and an economist in the George W. Bush administration. “What this shows is that’s not true. The world just moves on without us.”

The US is being left behind as other major powers forge new trade deals.

While the U.S. still boasts the world’s largest economy, China, Japan and countries throughout Europe are moving forward with trade deals that do not include the United States. The World Trade Organization(WTO) counts 35 different bilateral and regional trade agreements that are under consideration around the world—only one involves the United States.

Japanese Prime Minister Shinzo Abe, in hailing a trade deal his country signed with the European Union in July 2017, said the pact represents a hoisting “the flag of free trade high amidst protectionist trends.”

For some U.S. businesses, Trump’s “America First” mantra and pulling the United States out of the Trans-Pacific Partnership is having a real dollars-and-cents impact. Cattle ranchers in Canada and Australia, for example, will be able to sell their beef at lower prices in Japan than American ranchers who will be subject to higher tariffs.

“This one was really about America’s role in the Pacific, and I think pulling out was a signal we’re not as interested,” said William Reinsch, the Scholl Chair in International Business at the Center for Strategic and International Studies and a former Clinton administration official. “The president can say whatever he wants, but the way this is being perceived is as a pullback of American influence.”

Other nations are only too eager to fill the void being created by Trump’s policies, especially China which is aggressively pursuing its own vision of a new international world trade order. At a January event in Washington, D.C., Juan Gabriel Valdés, the Chilean ambassador to the United States, compared Chile’s now warm relationship with China with that of the United States.

“In the history of the region, we have never had a partner that is so willing, so open, so dedicated to listening to what are our needs than what we have now with China,” Mr. Valdés said.

“The United States continues to be, and will probably be in the next 10, 20 years, the main partner of the Latin American region,” he said. “But change is there. It’s written on the wall if this continues like it is.”

Trump insists his policies are intended to get better deals for U.S. companies and workers.

“We’ll be doing other trade deals,” Mr. Trump said last month as he signed an executive order that imposes new tariffs on imports of washing machines and solar modules. “We’re in the process of negotiating with other countries, also, all of which have treated us very unfairly.”

TOPSHOT - US President Donald Trump holds up an executive order withdrawing the US from the Trans-Pacific Partnership after signing it in the Oval Office of the White House in Washington, DC, January 23, 2017.
Trump the decree Monday that effectively ends US participation in a sweeping trans-Pacific free trade agreement negotiated under former president Barack Obama. (Photo Credit: SAUL LOEB/AFP/Getty Images)

Another Trump policy shift that he says puts America first is his June 2017 decision to pull out of the 2015 Paris climate accord. With Syria and Nicaragua announcing last November that they would sign on to the agreement, that leaves the United States as the only country that refuses to join the effort to fight global warming and climate change.

“As if it wasn’t already crystal clear, every single other country in the world is moving forward together to tackle the climate crisis, while Donald Trump’s has isolated the United States on the world stage in an embarrassing and dangerous position,” Michael Brune, executive director of the Sierra Club, said in a statement.

Just like his decision to pull the United States out of TPP, Trump’s move on the Paris climate accord opened the door for other countries to exert influence.

What is that damage? “It provides an opportunity for China to exert itself on the global stage” after the U.S. leaves a “leadership vacuum,” said Ann Carlson, an environmental law professor at UCLA.

“Pulling out of the Paris agreement would be an unforced error in the sense of undermining our diplomatic efforts going forward,” Keohane said. “For the rest of the world, this is a central issue for foreign policy.”

For the world’s climate, Keohane has this warning. “If this ends up as a four-year blip on a long-run downward [emissions] trajectory, then the climate can survive it. But the climate won’t be able to survive the long-run absence of U.S. leadership.”

The slogan "FOR THE PLANET" is projected on the Eiffel Tower as part of the COP21, United Nations Climate Change Conference in Paris, France, Friday, Dec. 11, 2015. (AP Photo/Francois Mori)

The planet's climate cannot afford inaction by the United States.

That’s because the United States is by far the biggest contributor to the problem of increased levels of carbon dioxide in the planet’s atmosphere. In fact, Americans are responsible for more than twice the amount of CO2 emissions than citizens of China, Japan or Europe. America started burning fossil fuels at higher rates than the rest of the world early on. That means the United States is responsible for almost a third of the excess CO2 that’s already in the atmosphere, even though it has just slightly more than four percent of the world’s population.

In short, there’s a clear case to be made that worldwide climate change is “made in America.”

Climate Interactive has calculated that without U.S. participation in the Paris climate accord the world could expect to see an additional 0.3 degrees Celsius of warming by 2100. There also are fears that other signatory countries to the Paris agreement may see the U.S. pullout as an opening for them to scale back their own participation or pull out entirely.

While Trump sees actions like the imposition of trade tariffs and pulling out of multilateral treaties as putting America first, they actually could have the opposite effect. Other countries, particularly China and the European Union, could retaliate against the U.S. by imposing their own tariffs and trade sanctions. Trump’s proposed steel and aluminum import tariffs also increase the risk of military conflict at a time when his administration is actively trying scale back America’s armed forces deployments around the world.

There’s also the economic impact at home to consider. As pointed out in a March 1 Washington Post editorial, prices for pretty much anything made from steel or aluminum will go up. Jobs saved or created in the steel and aluminum manufacturing industries may be offset by jobs lost in other sectors of the economy. But perhaps the most ironic aspect of Trump’s proposal is that his proposed increase on taxes on raw materials is coming from the same president who has said that cutting corporate and personal income taxes are the keys to stimulating the U.S. economy.

It also should be noted that the lone Trump cabinet member who favors the tariffs is Commerce Secretary Wilbur Ross, a billionaire who owes much of his personal worth to buying and selling U.S. steel mills.