Got Milk? How About from an Extinct Gigantic Cow? 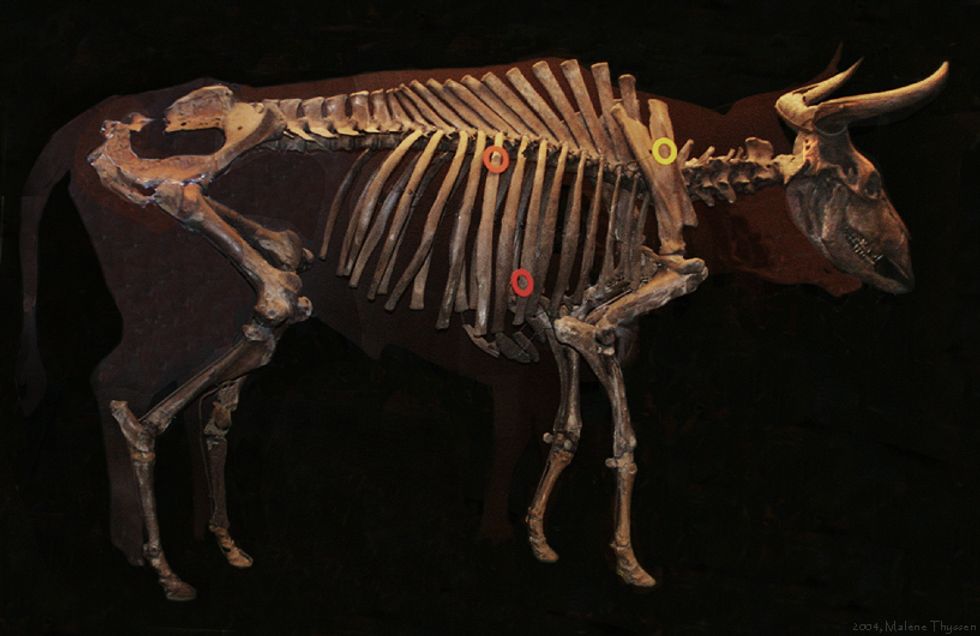 The aurochs, a seven-foot tall ancestor of modern cattle, has been extinct for nearly 400 years. Yet you may have seen one. They were depicted in ancient cave drawings for millennia, often engaged in heated battle. Soon, you may have the opportunity to see one again—in the flesh.

The aurochs is one of the targets of the Taurus program, a coalition of ecologists, geneticists, historians, and cattle breeders. The project seeks to recreate the ancient aurochs through a process called back breeding. Back breeding involves mating existing breeds of “primitive” cattle, which share much of the aurochs’ DNA. With each successive generation of cattle, the scientists get closer to recreating the ancient species.

The process is going remarkably quickly, said Ronald Goderie, an ecologist who directs the Taurus project. “What you see already in the second generation is that the coloration of the animal is very aurochs-like. The bulls are black and have an eel stripe [along the spine]. They’re already higher on the legs.”

Goderie continued, “We think in six, seven generations, we will get a stabilized group of Taurus cattle. That will take us another 7 to 10 years.”

Professor Donato Matassino from the Taurus project cautioned, “I don’t think we’ll ever be able to create an animal that is 100 percent like the aurochs,” But, he continued, “we can get very close.”

Scientists have a complete genome of an aurochs, which was found in a 6,700-year old bone in England. They will compare each successive generation of aurochs-like animals to this genome.

This project is working with the “rewilding” movement in Europe, which seeks to recreate ecological balance and environments from before humans arrived. Seven rewilded parks have already been created, which would give the aurochs a suitable place to live. They would also, hopefully, create a more hospitable environment for many species of animals that evolved in the presence of large animals like the aurochs. “Big grazing animals keep patches of land open and create variety in the landscape, which helps many thousands of species of plants, insects and animals,” explained Wouter Helmer, founder of Rewilding Europe.

But others argue that scientists should be cautious about bringing back aurochs when the effects of releasing them are unknown. “If we’re targeting one particular member” of an ecosystem, said Manuel Lerdau, a University of Virginia ecologist, “what will we need to be thinking about with the other members of the community?”

The aurochs is not the only species that experts are trying to bring back. Using similar techniques, the ancient quagga, a zebra-like animal, has been resurrected. Scientists are also hoping to bring back other animals, including the woolly mammoth and cave lions.