A New Clue About Past Life on Mars 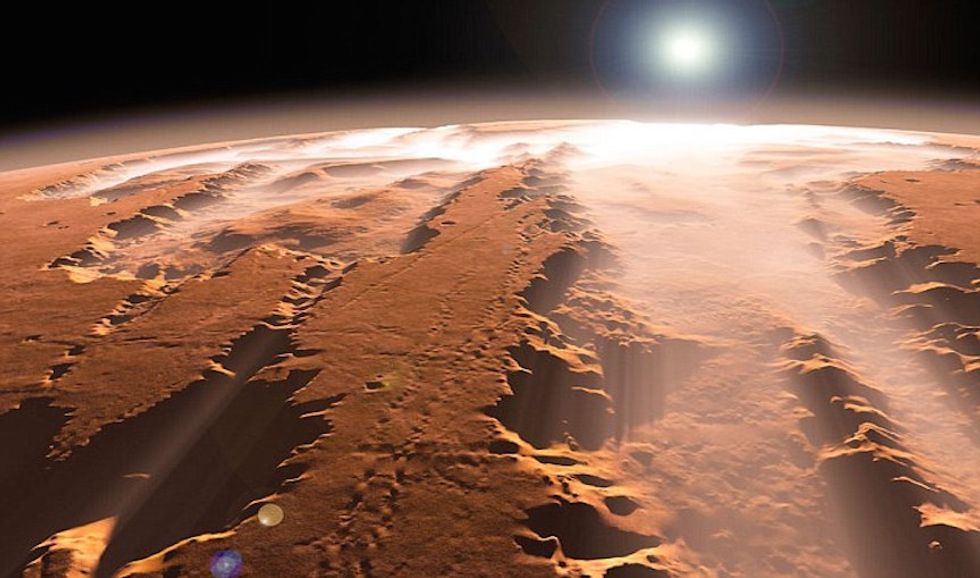 Mars’s atmosphere is mostly carbon dioxide; however, NASA’s Stratospheric Observatory for Infrared Astronomy (SOFIA) has now detected atomic oxygen in Mars’s atmosphere, providing a clue to Mars’s energy cycle and its potential for life. Atomic oxygen is a single oxygen atom, unlike the oxygen (O2) breathed by humans, which contains two. Atomic oxygen reacts and bonds with other elements more easily than O2, so it is extremely difficult to detect. NASA’s Mariner and Viking missions measured atomic oxygen on Mars in the 1970s, but it has not been studied since; this marks the first time that scientists have been able to observe atomic oxygen from afar.

Atomic oxygen is difficult to measure partly because it doesn’t stick around for long, but also because it can only be observed in far-infrared light. Because SOFIA is a telescope on an airplane, it is able to fly above 85% of the water vapor in the Earth’s atmosphere, detecting the infrared light that the atmosphere would otherwise block.

The Stratospheric Observatory for Infrared Astronomy (SOFIA) observatory, a flying telescope aboard a Boeing 747 jet, taking off. Credit: NASA.

"Atomic oxygen in the Martian atmosphere is notoriously difficult to measure," said Pamela Marcum, SOFIA project scientist. "To observe the far-infrared wavelengths needed to detect atomic oxygen, researchers must be above the majority of Earth’s atmosphere and use highly sensitive instruments, in this case a spectrometer. SOFIA provides both capabilities."

Atomic oxygen is produced on Mars when ultraviolet radiation from space hits water on the surface of Mars, splitting it into two hydrogen atoms and one oxygen atom. The hydrogen is released into space, but the oxygen mingles in Mars’s atmosphere. Mars has ice caps two miles thick, frozen ponds at the bottoms of craters, and even flowing water on its surface. In its past, it likely had even more water, and thus even more atomic oxygen. In its most recent

study, SOFIA observed half the predicted amount of atomic oxygen, likely due to variations in Mars’s atmosphere.

According to Dana Backman, director of SOFIA's outreach programs, "what [SOFIA is] doing is adding a piece to a puzzle about the overall chemistry and physical processes in the Martian atmosphere, in which oxygen is an important player because it's such a reactive substance.” If the atomic oxygen joins an O2 molecule in Mars’s atmosphere, it creates ozone; on Mars, like on Earth, ozone affects the planet’s temperature and protects it from the sun’s radiation.

The Spectrum of oxygen superimposed on a Viking 1 composite image of Mars by USGS University of Arizona. Credit: NASA.

Atomic oxygen and the ozone that results from it regulate the energy flow to and from Mars’s surface. Understanding them will help scientists figure out what energy is available to fuel life there. As SOFIA makes more atmospheric observations, scientists will continue to delve into Mars’s atmosphere in increasing detail, yielding ever more clues about what lies beneath.