Saudi Arabia Just Changed Their Story on the Death of Jamal Khashoggi Again, and They're Getting Warmer 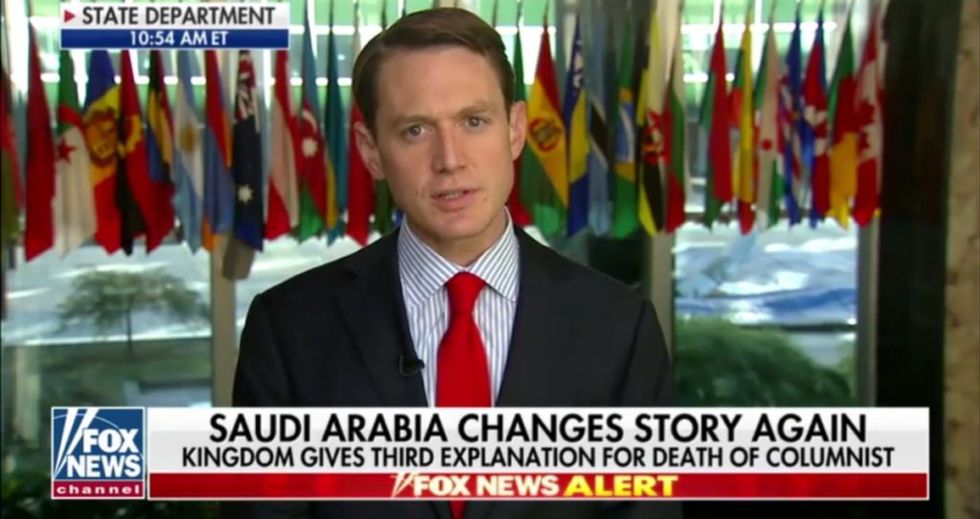 Fox News alert on the changing story of the death of journalist Jamal Khashoggi at the Saudi consulate in Turkey. (Fox News)

President Donald Trump and the Trump administration drew heavy criticism over their response to Khashoggi's disappearance and subsequent reports of his death. The President and members of the administration faced accusations of aiding the Saudi government over advocating for a resident of the United States.

Khashoggi was last seen entering the Saudi Arabian consulate in Istanbul, Turkey. At first the Saudi government reported Khashoggi left the consulate, but Turkish authorities stated they believed the journalist died there.

Since their initial response, the Saudi official story continues to evolve, including today's announcement. Watch a report of the latest information here.

Fox News also outlined the changes in the Saudi story since October 3. They noted:

•Today: killing was a premeditated crime"

"Jamal Khashoggi's body still hasn't been found. Where is it?"

"There is a crime here, but there is also a humanitarian situation. The family wants to know and they want to perform their last duty."

People were not surprised to see another new version of what happened to Khashoggi and the consulate coming from Saudi Arabia. Nor was the determination of premeditated murder shocking as international sentiment favored the Turkish version of events from the beginning.

@FoxNews Are we sure that the saudi murder was not actually done by democrats to make the Trump administration look bad ?? #magabomber
— Guy Smiley 🍑 (@Guy Smiley 🍑) 1540479990.0

While others questioned continued relations between the United States and Saudi Arabia.

Many raised the issued of weapons sales.

@FoxNews The United States must END all weapons sales to Saudi Arabia and END all support for their crimes in Yemen.
— Daniel Harder (@Daniel Harder) 1540479657.0

@FoxNews Two-faced doesn’t even come close to the truth about those so-called allies! https://t.co/RuaMILFByV
— ValiantAriel (@ValiantAriel) 1540480135.0

The investigation into Khashoggi's death continues.