Sarah Sanders Just Tried to Defend Donald Trump Against the Accusations Michael Cohen Levied Against Him, and Twitter Is Not Having It 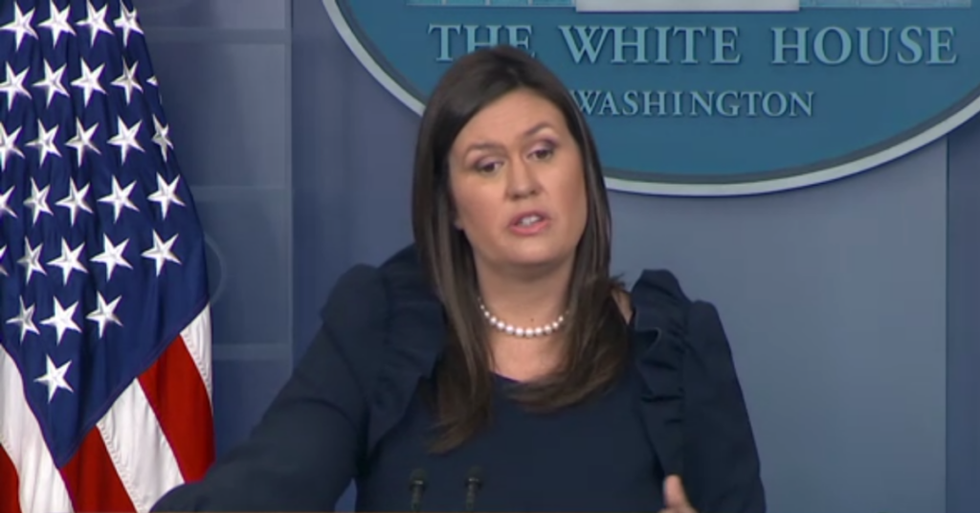 During Wednesday's White House press briefing, Press Secretary Sarah Sanders deemed a yes or no question by Celia Vega of ABC News unworthy of a straight answer. After discussing the events of Tuesday where longtime fixer and personal lawyer for Donald Trump, Michael Cohen, named the President as an unindicted co-conspirator, Vega asked:

To which Sanders responded:

Sanders then repeated her prior scripted disclaimer without directly addressing Vega's actual question about lying, saying, "The President in this matter has done nothing wrong, and there are no charges against him."

But did the President lie? And if he did lie to the citizens of the United States—whom he took an oath to serve—is that not wrong? And finally, is not currently under indictment synonymous with did nothing wrong?

Today Sarah Sanders suggests that because Trump hasn’t been charged with a crime, he didn’t commit one. Under DOJ… https://t.co/6HMOscCIrL
— Renato Mariotti (@Renato Mariotti) 1534962820.0

People referred to the interview on Air Force One as proof positive of a lie by the President caught on tape.

Here is that Air Force One video:

But in the following months, the President's story changed many times until finally stating he not only knew of the $130,000.00 payment, he authorized it and repaid Michael Cohen for it. Which means he lied during the Air Force One interview or he is lying now. Plus there is the matter of the Cohen tape of Trump discussing a potential payment to Karen McDougal.

.@PressSec refuses to explain to @kaitlancollins how the president could tell Fox (in an interview on WH grounds to… https://t.co/FLjgDP90Ef
— Jake Tapper (@Jake Tapper) 1534963120.0

Regardless of which version is the lie or if they are all lies, can Sanders and the White House still state unequivocally that Trump did nothing wrong? Lying is supposed to be wrong.

Some pointed out that the President certainly lied based on his remarks on Air Force One in April 2018.

@WhiteHouse @PressSec trump stated on air force one he knew nothing about payments then later admitted to the payme… https://t.co/jCbydc4iuc
— squashzilla (@squashzilla) 1534967316.0

While others pointed out that "has not been charged with a crime" does not equal "has not done anything wrong."

When Sanders says Donald Trump “did nothing wrong” it’s worth remembering that these illegal payments only happened… https://t.co/NO1VvJsBYk
— Matt McDermott (@Matt McDermott) 1534963108.0

While Sanders presented the White House's official response without wavering, it appears the White House version of doing nothing wrong may vary greatly from public perception.