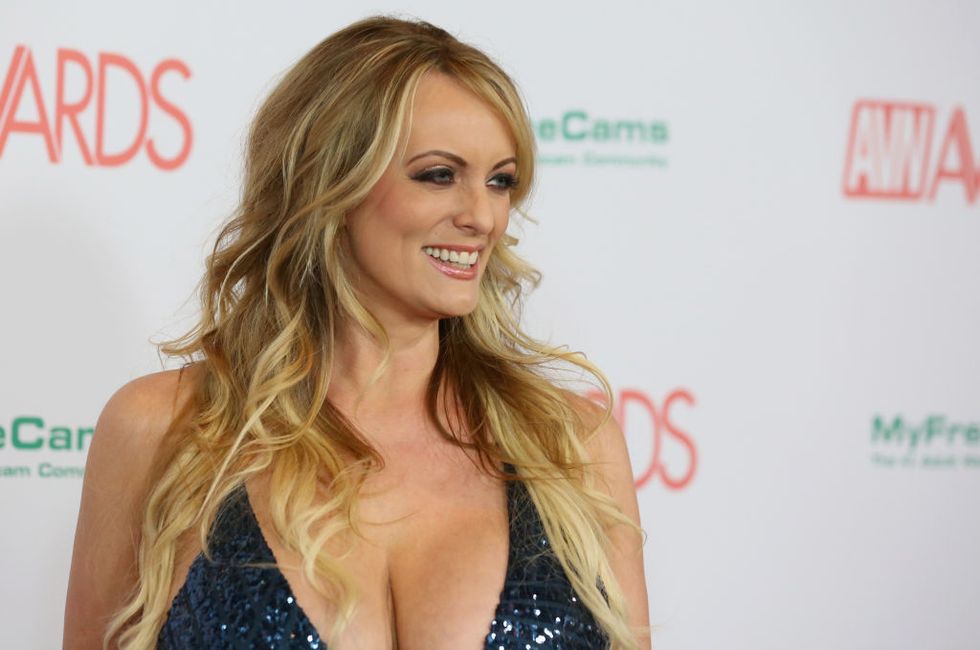 Stephanie Clifford, the adult film actress better known as Stormy Daniels, had a rather short and sweet reaction to the news that Michael Cohen, President Donald Trump's former personal attorney and fixer, had pleaded guilty to eight criminal counts––five charges of felony tax evasion, two counts of campaign finance violations, and one count of bank fraud––in a deal struck with federal prosecutors.

The news that Cohen had implicated the president in a scheme to unlawfully silence two women, including Clifford, without whose very public efforts Cohen would likely never have been charged, sent shock waves around the world.

It was the moment of vindication Clifford had been waiting for, having suffered through months of having her character impugned and her story discredited, and her glee––and undoubtful relief––was infectious.

@StormyDaniels Stormy, by hiring @MichaelAvenatti you just may have saved the United States of America. The way I s… https://t.co/RkvR3pipis
— THE BADGER! (@THE BADGER!) 1534908601.0

@StormyDaniels I thought you were awesome right froth the get-go. And you just keep getting better!
— Alice Evans (@Alice Evans) 1534935240.0

President Trump has responded to the news by leveling attacks against Cohen, whom he has for months characterized as disloyal. In two separate tweets, he tore into Cohen while praising Paul Manafort, his former campaign manager who on Tuesday was convicted of eight criminal counts by a grand jury in Virginia.

There was no mention from the president of Cohen's admission that he violated campaign finance laws to pay off Clifford and former Playboy model Karen McDougal at Trump's behest.

Cohen had found himself at the center of the questions regarding a payment Clifford received from him as part of the non-disclosure agreement to keep her from discussing a sexual encounter with Trump back in 2006, while he was married to his current wife, Melania, and just a few months after Melania gave birth to their son, Barron.

A separate lawsuit filed by Clifford contends that Cohen initiated a “bogus arbitration” hearing against her without notifying her beforehand, and a copy of the restraining order against Clifford confirms that the judge made a “one-party” ruling that did not require her to be notified.

Cohen previously claimed that he paid Clifford out of his own pocket and that the president never reimbursed him for the settlement. But during a highly publicized 60 Minutes broadcast, Clifford's attorney Michael Avenatti presented documents showing that the payment was sent to Cohen at his Trump Tower location, and communicated through his official Trump Organization email, indicating that he made the payment on Trump’s behalf. Analysts have posited that the exchange of funds could well be an illegal campaign expenditure on Trump’s behalf.

But Clifford's admission that she had received threats to stay quiet about her affair with Trump was what galvanized her case.

Clifford recalled she was on her way to a fitness class with her infant daughter in tow several years ago when a man stopped her in a Las Vegas parking lot.

"I was in a parking lot, going to a fitness class with my infant daughter. T– taking, you know, the seats facing backwards in the backseat, diaper bag, you know, gettin’ all the stuff out,” Clifford told 60 Minutes correspondent Anderson Cooper. “And a guy walked up on me and said to me, ‘Leave Trump alone. Forget the story.’ And then he leaned around and looked at my daughter and said, “That’s a beautiful little girl. It’d be a shame if something happened to her mom.” And then he was gone.”

Clifford never identified Cohen by name, but she didn't have to. She received a cease-and-desist notice from Cohen's lawyer almost immediately after the broadcast.

In an appearance on CNN yesterday, Michael Avenatti said Trump's biggest problem is that "he lost control."

"He has lost control over Manafort. He's lost control over Cohen. These two individuals now are going to be looking to cut their own criminal sentences," he said, implying that more information implicating the president in federal crimes is likely to come out.

In a statement yesterday, Lanny Davis, Michael Cohen's personal attorney, said his client will refuse any pardon from Trump.

Davis said Cohen would "never" accept a pardon from "a man that he considers to be a corrupt and a dangerous person."