Guess that's why he hasn't flipped. 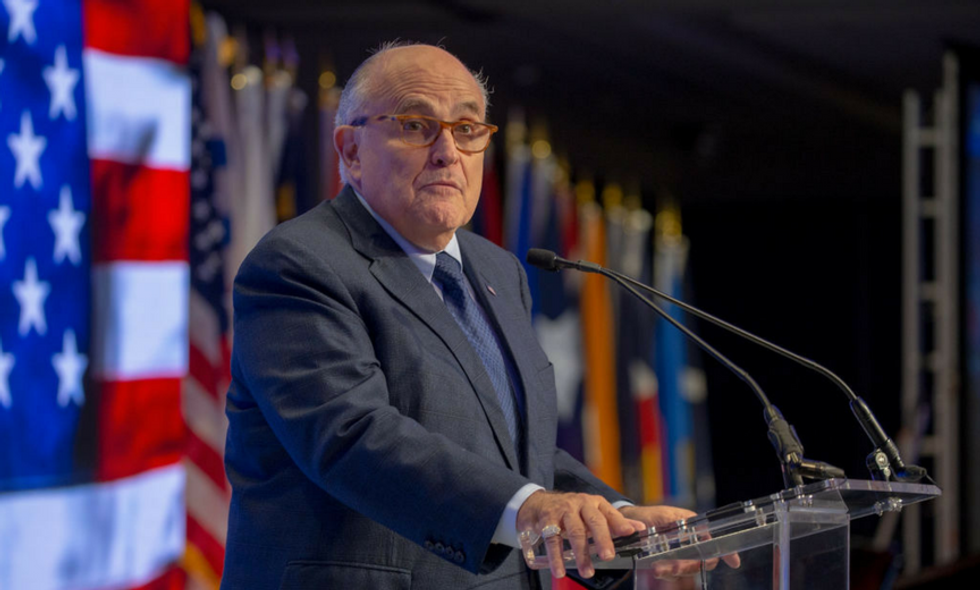 Rudy Giuliani, President Donald Trump's personal attorney, launched yet another attack against Special Counsel Robert Mueller, claiming that the Russia investigation could get “cleaned up” with pardons from President Trump in light of Paul Manafort, the president's former campaign manager, being sent to jail.

“When the whole thing is over, things might get cleaned up with some presidential pardons,” Giuliani told the New York Daily News.

"I don’t understand the justification for putting him in jail," Giuliani added. “You put a guy in jail if he’s trying to kill witnesses, not just talking to witnesses. That kind of investigation should not go forward. It’s time for Justice to investigate the investigators.”

"The harm in this case is harm to the administration of justice and harm to the integrity of the court's system," Berman Jackson told Manafort in court, capping an end to months of attempts from Manafort to lighten his house arrest restrictions.

Manafort and his longtime business partner Rick Gates were charged with 12 counts of “conspiracy against the United States, conspiracy to launder money, unregistered agent of a foreign principal, false and misleading FARA statements, false statements, and seven counts of failure to file reports of foreign bank and financial accounts.”

Last week, the office of the special counsel filed a superseding indictment against Manafort; the indictment also named Manafort’s former business associate Konstantin Kilimnik, an individual with close ties to Russian intelligence, as a co-defendant. The two men face obstruction of justice and conspiracy to obstruct justice charges. The indictment alleges that they conspired to intimidate witnesses in Robert Mueller's investigation into whether Russian operatives interfered in the 2016 presidential election.

President Trump, who has stepped up his attacks against the special counsel in recent weeks, said Manafort, who has a history of representing prominent Republican politicians, faces a "tough sentence."

"Didn't know Manafort was the head of the Mob," he added.

Giuliani's suggestion that Manafort could receive a pardon in his future does little to hide much of the White House's intentions.

Two people familiar with how the legal team operated told The New York Times said Dowd “took the lead” in dealing directly with attorneys for both Flynn and Manafort.

Dowd’s conversation with Robert Kelner, Flynn’s attorney, occurred sometime after Dowd became the president’s personal lawyer, at a time when a grand jury was hearing evidence against Flynn on several potential crimes. A White House source told reporters that Dowd had mentioned privately that he did not know why Flynn had accepted a plea with the special counsel. The discussion with Reginald Brown, Manafort’s attorney, came just before his client was indicted in October for federal crimes.

While it’s unclear whether Dowd discussed the pardons with the president before bringing them up with the other lawyers, the talks suggest that the president’s legal team was concerned about what Flynn and Manafort might reveal were they to cut a deal with Mueller and his investigators.

Giuliani himself made headlines earlier this month when, during an interview he gave The Huffington Post, he claimed that Trump hypothetically could have shot former FBI director James Comey to end the Russia investigation and not face prosecution for it while in office.

Not long after Giuliani's interview, the president asserted that he has the right to pardon himself and once again stressed his belief that Special Counsel Robert Mueller’s investigation into Russian election interference is “unconstitutional.”

The latest statement from Giuliani and the attacks from the president come the same week as a new Politico/Morning Consult poll which reveals that Robert Mueller’s favorability among Democrats and independents has slipped considerably.

Mueller’s favorability among Republicans also took a significant hit, in what is likely an indication that President Donald Trump’s continuous attacks against the special counsel’s probe are working. A record 53 percent of Republicans say they now view Mueller unfavorably.