Rudy Giuliani Just Tried to Clear Up What He Meant About Conversations Between Trump and Cohen, and Now We Know What He Fears Will Be on His Gravestone 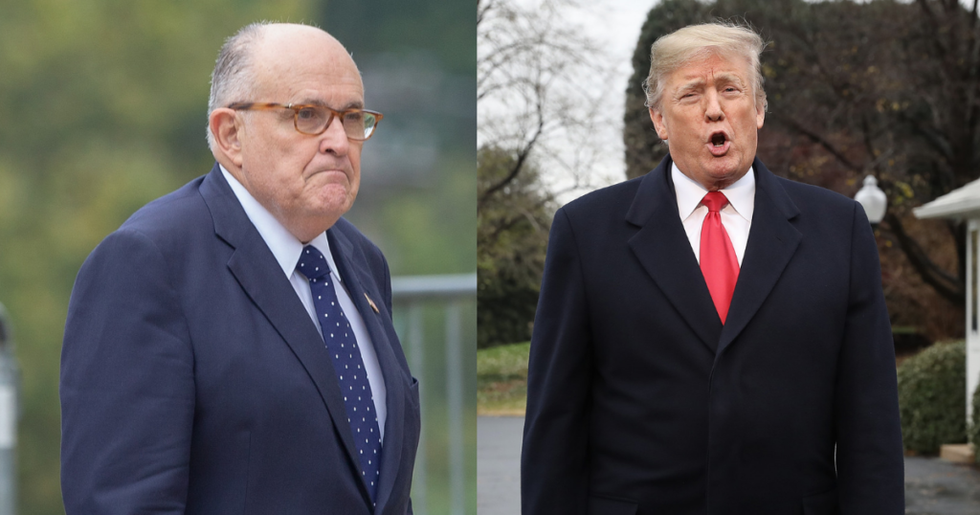 Rudy Giuliani's tendency to contradict himself about any and all matters related to Special Counsel Robert Mueller's Russia investigation continues to confound statesmen, media professionals, and pundits nationwide. Now, in a new interview with The New Yorker, he reveals what he fears might end up on his gravestone.

“I am afraid it will be on my gravestone: ‘Rudy Giuliani: He lied for Trump,’” Giuliani told The New Yorker. “Somehow, I don’t think that will be it. But if it is, so what do I care? I’ll be dead. I figure I can explain it to St. Peter. He will be on my side, because I am, so far... I don’t think, as a lawyer, I ever said anything that’s untruthful.”

Giuliani, who despite mounting evidence of communication between the Trump campaign and Russian operatives has continued to claim there was "no collusion," was resoundingly mocked.

Giuliani made the remarks after he was questioned about conflicting statements he made about the Trump Tower Moscow project, which was the focus of an explosive Buzzfeed News report alleging that President Donald Trump directed his former attorney and fixer Michael Cohen to lie to Congress.

You can read the exchange between Giuliani and The New Yorker's Isaac Chotiner below:

IC: The Times reported that President Trump was involved in discussions about building a skyscraper in Moscow during the campaign, and you acknowledged that, and then, more recently, you said that you didn’t actually know this was the case.

RG: First of all, the Times was absolutely wrong. Probably just as wrong as BuzzFeed was. I never said he had [narrator voice:] “conversations about a skyscraper in Moscow.” The only thing that ever happened was that they submitted a letter of intent about a possible project in Moscow that never went beyond that. No money was ever paid, no plans were ever made. There were no drafts. Nothing in the file. Nothing ever happened to it. Much ado about nothing, because the New York Times wants to crucify the President. And the President had no conversations. I shouldn’t say he had no conversations. He had a few conversations about this early-stage proposal that he ended somewhere in early 2016, and doesn’t have a recollection of anything else, and there is nothing to support anything else. This is a story that is completely exaggerated and made up.

IC: Did you talk to President Trump about that?

RG: Well, you have to figure out how I know it. Right? I can’t tell you what I talked to my client about.

IC: O.K., I guess my question—maybe I phrased this badly—

RG: No, no, no, you’re right. They did say one thing yesterday, and another thing today. But what they are doing is misinterpreting what I said yesterday. I have said the same thing for two months. And that is that the President had very little involvement in this so-called project in Moscow.

We know, however, that that's not true. Giuliani not only told the Times that Trump was involved in conversations about the project, but he also provided more details about these conversations during an appearance on Meet the Press, during which he said that negotiations over the Trump Tower Moscow project likely went up to the 2016 presidential election.

"Well, it's our understanding that they went on throughout 2016," he said. "There weren't a lot of them, but there were conversations. Can't be sure of the exact dates but the president can remember having conversations with him [Michael Cohen] about it––"

"Yeah, probably up to, could be up to as far as October, November. Our answers cover until the election."

Giuliani made those statements just a day after he denied that his statements on collusion have ever changed.

The New Yorker interview further spotlights Giuliani's myriad contradictions and shows him walking back his own statements on Meet the Press:

IC: You said today, “My recent statements about discussions during the 2016 campaign between Michael Cohen and then-candidate Donald Trump about a potential Trump Moscow ‘project’ were hypothetical and not based on conversations I had with the President.”

RG: Correct. I was pointing out how you would deal with it in court if we were going to trial, and how, even if there were such conversations, which there weren’t, they would be completely innocent. Whenever you do that, you always run the risk someone is going to report just the first part of your conversation. But I thought it was necessary to do it. If he had a project in Moscow, there would be nothing wrong with it, but he didn’t.

IC: Wait, Mr. Mayor, if he had a project in Moscow that his attorney was discussing and he himself may have been involved in while he was calling for a loosening of sanctions against Russia and a different policy in Ukraine, and the American people didn’t know anything about that, you wouldn’t find that problematic?

IC: The Times reported yesterday, “President Trump was involved in discussions to build a skyscraper in Moscow throughout the entire 2016 presidential campaign . . .”

RG: I didn’t say that. Go find out where I said that on Sunday. I never said he was involved in such conversations. I said the same thing I said to you, which is—

IC: The quote in the story from you is that the “ ‘discussions were going on from the day I announced to the day I won,’ Mr. Giuliani quoted Mr. Trump as saying during an interview with The New York Times.”

These contradictory remarks have made Giuliani a subject of considerable derision on news and talk show programs which have dedicated much of their airtime to covering the Russia investigation's many twists and turns.

Yesterday, guests on an MSNBC morning show panel with Joy Reid reacted with disdain for Giuliani and his conflicting stories.

“Every week Rudy Giuliani gets on TV and confesses another crime. I expect him to say in two weeks that Trump is guilty of everything,” said Tara Dowell, who once appeared on The Apprentice with Trump.

“I do billion-dollar deals all the time, so some of them just kind of slip my mind, I guess,” said Washington Post columnist E.J. Dionne. “If there’s ever a trial on all of this, I think a whole day of the trial will just be jurors watching old Rudy Giuliani tapes and clips because the number of times, he is essentially confirming Trump lied through his teeth about doing business with Russia in that period—it’s just astounding.”