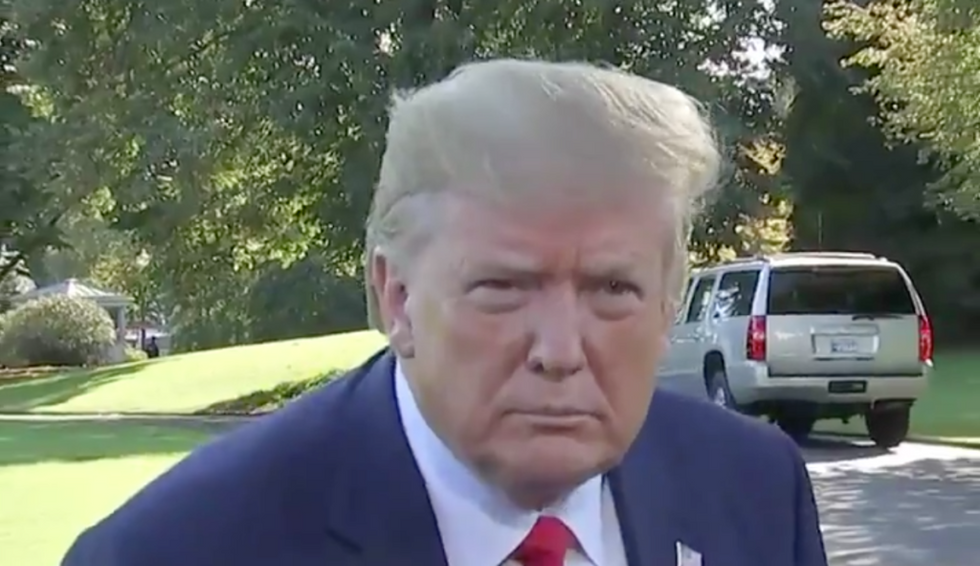 But while speaking to reporters on the White House lawn Thursday afternoon, Trump didn't return the favor.

On Thursday morning, foreign nationals Lev Parnas and Igor Fruman—who worked with Giuliani to dig up dirt on former Vice President and 2020 presidential contender Joe Biden—were arrested at Dulles Airport with one-way tickets to an undisclosed country outside of the United States.

The pair were arrested for violations of campaign finance laws that forbid foreign nationals from donating to United States political campaigns. Evidence indicates that the two further took steps to conceal the hundreds of thousands of dollars made to Republican candidates and PACs.

When asked by reporters about the arrests, Trump threw Rudy pretty forcefully under the bus.

After conceding that he "might have a picture with them," Trump insisted that he had no idea who they were or what they did.

"Maybe they were clients of Rudy, you'd have to ask Rudy. I just don't know."

Giuliani was spotted dining with Parnas and Fruman at a Trump Hotel Wednesday night—the day before the arrest.

People weren't surprised that Trump threw Giuliani under the bus.

Though Trump dismissed the numerous photos with Parnas and Fruman, he and his ilk have been referencing a misleading photo of Biden and his son Hunter posing with Hunter's (American) co-board member of Ukrainian energy company Burisma Holdings as evidence that Biden interfered with an investigation to help his son's business dealings.

The Biden family was PAID OFF, pure and simple! The fake news must stop making excuses for something that is totall… https://t.co/hX8ljpFBHS
— Donald J. Trump (@Donald J. Trump) 1570380146.0

BREAKING: After Joe Biden claimed that he never discussed his son’s foreign business dealings with him, A photo su… https://t.co/A78YJX1pZC
— Students For Trump (@Students For Trump) 1569893750.0

A picture says a thousand words—unless they're about the President, of course.