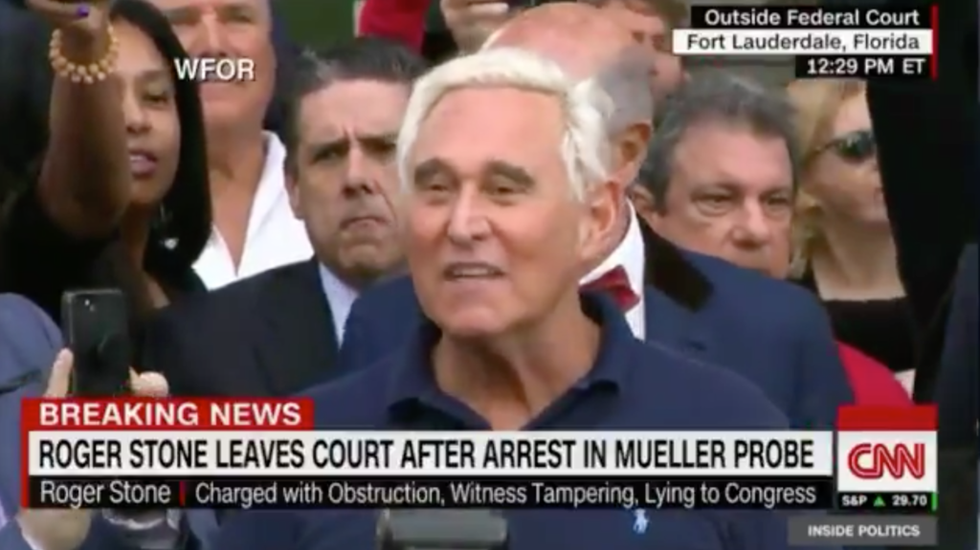 Former Trump Advisor Roger Stone's trial may be a few months away, but poetic justice is much more swift.

Stone was arrested at his home for coordinating with WikiLeaks to obtain Hillary Clinton Campaign emails stolen by Russian operatives.

After being released on bail a few hours later, Stone spoke to reporters:

"As I have always said, the worst thing than being talked about is not being talked about. After a two-year inquisition, the charges today relate in no way to Russian collusion, WikiLeaks collaboration or any other illegal act in connection with the 2016 campaign."

However, Stone was barely audible over boos and chants of "lock him up" from protestors.

Like many Trump campaign officials and supporters, Stone frequently called for the arrest and prosecution of former Secretary of State and 2016 Democratic Presidential candidate Hillary Clinton.

Roger Stone is widely believed to have cemented the phrase "lock her up!" as a rallying cry for Trump supporters during the 2016 election. Protestors turning the chant around on Stone after his arrest was, for many, a bountiful serving of poetic justice.

People chanting “Lock him up!” at Roger Stone outside of the courthouse this morning really warms my heart. If Trum… https://t.co/GrunkwQztC
— Joe Pike (@Joe Pike) 1548440055.0

The White House has attempted to distance Trump from Stone, but it may be too late for that.

Their relationship is well documented.

For his part, Stone appeared unfazed during the statement.

Stone's arrest is one of the most notable of the Russia investigation so far.