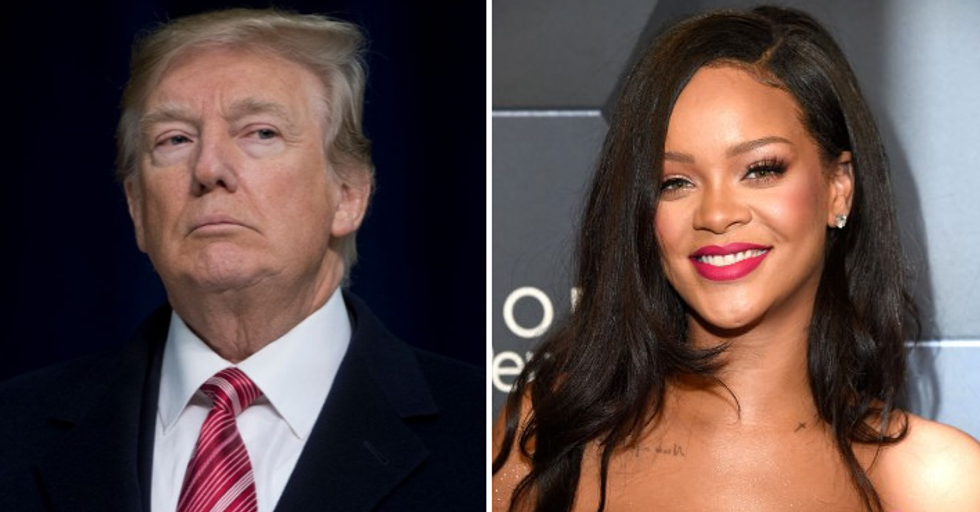 "It’s been said a million times, but here’s a million and one — Trump’s rallies are unlike anything else in politics. Currently, Rihanna’s “Don’t Stop the Music” is blaring in Chattanooga as aides toss free Trump T-shirts into the crowd, like a ball game. Everyone’s loving it."

It’s been said a million times, but here’s a million and one — Trump’s rallies are unlike anything else in politics… https://t.co/bohFEga3ji
— Philip Rucker (@Philip Rucker) 1541372936.0

"Not for much longer...me nor my people would ever be at or around one of those tragic rallies, so thanks for the heads up philip!"

Trump and his rallies received cease and desist letters from Steven Tyler of Aerosmith and requests he remove their music from his rallies from Adele, Axl Rose, Queen, Pharrell Williams, Neil Young and the Rolling Stones to name just a few.

The Barbados singer's response to learning Trump's rally included her song "Don’t Stop the Music" to pump up the waiting crowd came as no surprise to anyone who follows her. Rihanna vocally and publicly opposed the President and his policies on several occasions previously.

Rihanna called Trump an "immoral pig" over his Muslim travel ban. She also heavily criticized his administration's poor handling of the aftermath of Hurricane Maria in Puerto Rico.

People online applauded the singer's stance on the use of her music to excite the President's fans at one of his "tragic rallies."

Actor Chris Evans responded to the news with a tweet saying he loved the singer.

Others also expressed support for the artist's stance.

Although a few people tried to attack the singer for her message. But were shot down pretty fast.

@rihanna So tragic that our economy is the best it's been in decades, loosened regulations have helped small busine… https://t.co/JjN3qdodJV
— Melanie Parham (@Melanie Parham) 1541428370.0

However how much control an artist has over their music played at venues is limited. Axl Rose took to Twitter to explain.

But one person tried to claim artists asking for their work to not be associated with political ideology they vehemently oppose was "bullying."

@boo_radlee @axlrose Ok, art that moves people in all different ways and for different reasons. Disliking someone a… https://t.co/RqiTLlUDFe
— @neckra (@@neckra) 1541344156.0

Whether the Trump campaign honors any of the musicians asking them to not play their music remains to be seen. Trump is currently campaigning for the midterms slated for Tuesday, November 6, 2018.