Whistleblower Complaint Documents How Trump 'Solicited Interference from a Foreign Country in the 2020 U.S. Election' 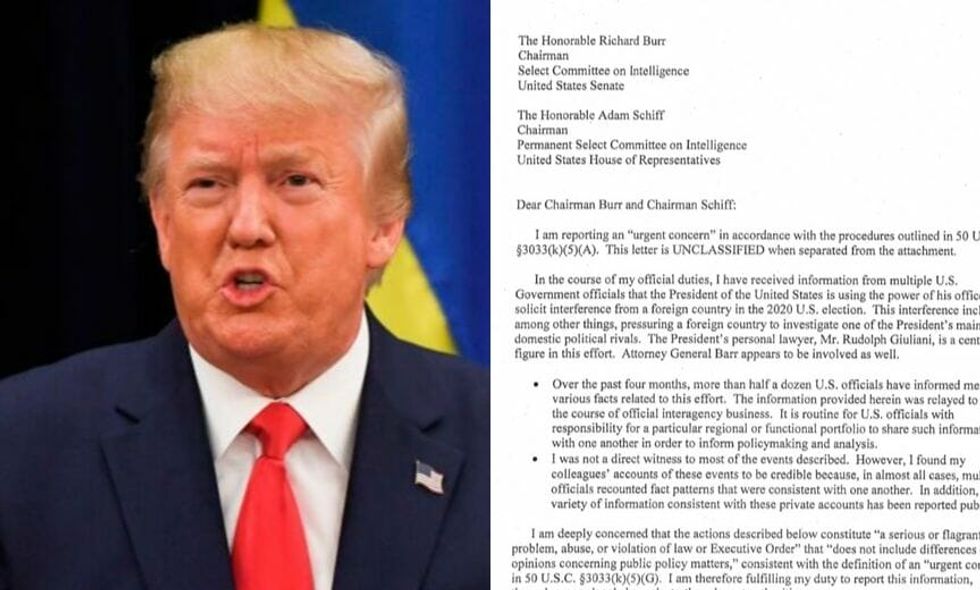 The highly anticipated whistleblower complaint regarding President Donald Trump's concerning interactions with Ukrainian President Volodymyr Zelensky, including the July 25 phone call which led to impeachment proceedings against Trump, has been released to the public with minimal redactions.

The release comes one day after the White House released a transcript of the phone call with Zelensky that showed Trump pressuring Zelensky to investigate former Vice President and Trump's potential political rival in 2020, Joe Biden, and his son Hunter.

One line from the beginning of the complaint is already making waves:

"In the course of my official duties, I have received information from multiple U.S. Government officials that the President of the United States is using the power of his office to solicit interference from a foreign country in the 2020 U.S. election."

Don't worry, this isn't Groundhog Day. You're not reliving the same day over and over.

Rather, the President—after the Mueller investigation's lack of definitive evidence that Trump conspired with Russia to influence the 2016 election—was emboldened enough to do it again ahead of 2020.

This time, the country is Ukraine, which depends on U.S. aid to defend itself against invading Russian forces on its eastern border, threatening its democracy. According to the complaint, Trump is tacitly dangling this aid by pressuring Zelensky to investigate the bogus claim that Joe Biden had Ukraine's top prosecutor fired to quash an investigation into a company on which Biden's son was a board member.

The complaint states that Trump pressured Zelensky to

"•    initiate or continue an investigation into the activities of former Vice President Joseph Biden and his son, Hunter Biden;

•    assist in purportedly uncovering that allegations of Russian interference in the 2016 U.S. presidential election originated in Ukraine, with a specific  request  that the  Ukrainian leader locate and turn over servers used by the Democratic  National  Committee  (DNC) and examined by the U.S. cyber security firm Crowdstrike, 3 which initially reported that Russian hackers had penetrated the DNC's networks in 2016; and

•    meet or speak with two people the President named explicitly as his personal envoys on these matters, Mr. Giuliani and Attorney General Barr, to whom the President referred multiple times in tandem."

People called Trump's effort for what it was.

"I have received information from multiple U.S. Government officials that the President is using the power of his o… https://t.co/XCGDKFtGwQ
— Hillary Clinton (@Hillary Clinton) 1569510874.0

The whistleblower complaint is out and it starts by saying that the person is concerned Trump is "using power of hi… https://t.co/fztZfxBG0E
— Yamiche Alcindor (@Yamiche Alcindor) 1569501916.0

More PROOF you DO NOT understand that you are wrong. You can NOT solicit assistance from a foreign power to affect… https://t.co/3tZH2X9QSy
— Joshua (@Joshua) 1569511745.0

The complaint goes on to note that White House lawyers took steps to cover up the call, including transferring the electronic record of the call out from the White House computer network—a private server, one might say.