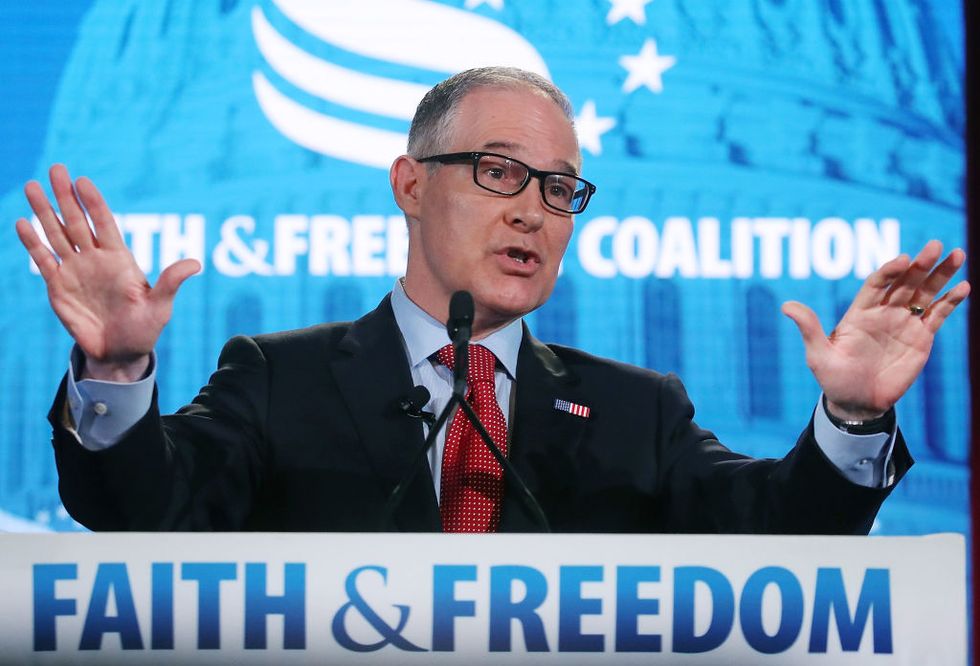 Former EPA Administrator Scott Pruitt speaks at the Faith and Freedom Coalition Road to Majority Policy Conference, at the Omni Shoreham Hotel, on June 8, 2018 in Washington, DC. Pruitt faced mutiple ethics scandals from his actions during his tenure. (Photo by Mark Wilson/Getty Images)

At 3:37pm EST Thursday in Washington D.C., President Donald Trump's official Twitter account announced that the resignation of embattled Environmental Protection Agency head Scott Pruitt had been received and accepted. Pruitt was facing 14 separate investigations into his activities at the EPA.

I have accepted the resignation of Scott Pruitt as the Administrator of the Environmental Protection Agency. Within… https://t.co/sX31IwSZ01
— Donald J. Trump (@Donald J. Trump) 1530819477.0

And the text of that letter, the language used and statements made are raising some eyebrows and turning some heads.

In the three paragraph note, 268 words total, Pruitt mentions serving Trump 9 times in phrases like "an honor to serve you", "difficult for me to cease serving you", "a blessing to be serving you in any capacity" and "My desire in service to you."

Of the 9 total times serving is mentioned in the letter, only once does Pruitt include also serving the American people. No mention of upholding or defending the United States Constitution is included anywhere.

But for anyone who has taken up public service knows, be it in the military or civil service, an oath of allegiance is undertaken. Pruitt as well as every Trump administration cabinet member, advisor and aide also took the same oath. It is required by federal law.

Under U.S. Code-Title 5-Part III-Subpart B-Chapter 33-Subchapter II-§ 3331, "An individual, except the President, elected or appointed to an office of honor or profit in the civil service or uniformed services, shall take the following oath:

I, ___, do solemnly swear (or affirm) that I will support and defend the Constitution of the United States against all enemies, foreign and domestic; that I will bear true faith and allegiance to the same; that I take this obligation freely, without any mental reservation or purpose of evasion; and that I will well and faithfully discharge the duties of the office on which I am about to enter. So help me God (reference to God now optional).”

At no time do members of the government swear to "serve the president." Scott Pruitt seems to have gotten his allegiance and duties twisted however based on his resignation letter.

The stunning thing about Pruitt's resignation letter is that the American people, the public all govt officials ser… https://t.co/dthGa7zdxW
— Steadman™ (@Steadman™) 1530823279.0

This letter is a testament to the ravenous appetite of Trump's fragile ego and thecslavish devotion necessary to pl… https://t.co/0TiElFVS1s
— Dan Pfeiffer (@Dan Pfeiffer) 1530822617.0

Also troubling for many is the overall message of the letter seems more in keeping with an Apostle resigning from his position with Jesus Christ, not an official of a secular government office. Pruitt mentions some variation of bless 4 times in the letter as well as citing "God's providence" as the reason for Trump's presidency.

Read the full transcript of Pruitt's resignation letter below:

Mr. President, it has been an honor to serve you in the Cabinet as Administrator of the EPA. Truly, your confidence in me has blessed me personally and enabled me to advance your agenda beyond what anyone anticipated at the beginning of your Administration. Your courage, steadfastness and resolute commitment to get results for the American people, both with regard to improved environmental outcomes as well as historical regulatory reform, is in fact occurring at an unprecedented pace and I thank you for the opportunity to serve you and the American people in helping achieve those ends.

That is why is hard for me [sic] to advise you I am stepping down as Administrator of the EPA effective as of July 6. It is extremely difficult for me to cease serving you in this role first because I count it a blessing to be serving you in any capacity, but also, because of the transformative work that is occurring. However, the unrelenting attacks on me personally, my family, are unprecedented and have taken a sizable toll on all of us.

My desire in service to you has always been to bless you as you make important decisions for the American people. I believe you are serving as President today because of God’s providence. I believe that same providence brought me into your service. I pray as I have served you that I have blessed you and enabled you to effectively lead the American people. Thank you again Mr. President for the honor of serving you and I wish you Godspeed in all that you put your hand to.