The EPA's Latest Advisory Panel Appointee Believes the Air Is "Too Clean," Because of Course He Does 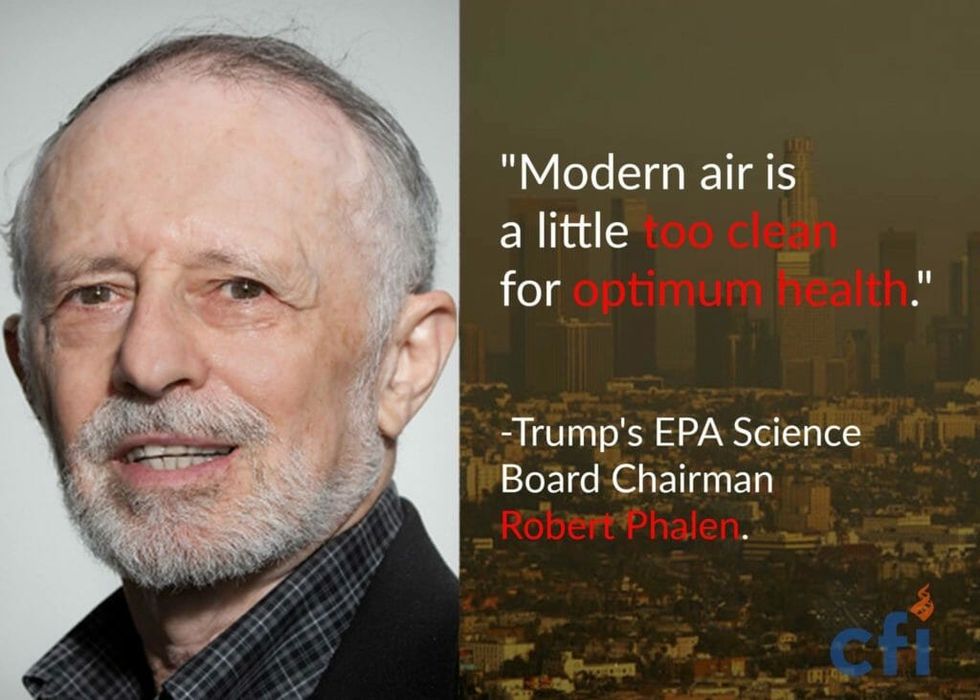 Dr. Robert Phalen’s life philosophy seems to be summed up in the old adage: what doesn’t kill you makes you stronger.

Phalen is one of Environmental Protection Agency (EPA) administrator Scott Pruitt’s recent additions to three scientific advisory panels, and he actually thinks that spewing pollutants into the atmosphere is a good idea because the air in America is "a little too clean for optimum health."

For anyone with a scorecard, Pruitt’s appointment is just the latest in a string of baffling policy decisions designed to rewire the EPA to better support industries that pollute.

President Barack Obama’s “enduring” environmental legacy has been under siege since Donald Trump’s inauguration. Pruitt, who sued the EPA more than a dozen times as Oklahoma’s attorney general, refuses to enforce the Clean Air Act, encourages energy utilities to use heavily-polluting fuels, and shrouds his decisions in a veil of secrecy to dampen dissent. Pruitt has also purged scientists in advisory roles and hired a slew of pro-business lobbyists and industry scientists in their place.

Phelan, despite his position as former former director of the Air Pollution Health Effects Laboratory at the University of California Irvine, doesn’t hold to scientific orthodoxy when it comes to pollution. He supports banning the use of lead in gasoline, and working to reverse the hole in the ozone. But he thinks we’ve gone too far in regulating pollution if it puts people out of work. In a 2004 study, he wrote that “neither toxicology studies nor human clinical investigations have identified the components and/or characteristics of [particulate matter] that might be causing the health-effect associations.”

But in the scientific community, that’s a mug’s game. The definitive proof that pollution kills people — just like the definitive proof that smoking causes cancer — can only be attained by subjecting people to dangerous amounts of harmful chemicals, an obviously unethical experiment. The correlational studies that prove that pollution and tobacco smoke are killers couldn’t be more more rigorous.

It would be interesting to get Phelan’s views on what actually killed 8,000 Londoners during the Great Smog of 1952, or why Beijing residents are almost universally afflicted by a disease known as Beijing cough. How would he explain the deaths — possibly as high as 400 residents — during New York’s Thanksgiving Smog event in 1966. The evidence that life expectancy decreases in heavily polluted countries where the air is rife with particulates is incontrovertible. That’s even true of states and cities. On average, New Yorkers live more than half a year longer than Los Angelenos.

But leaving all that aside, perhaps a more pertinent question would be why Pruitt and Phelan feel the costs associated with pollution should be paid by citizens, and not by the polluters themselves. Republican philosophy used to uphold conservation and protecting wilderness, but now the GOP appears bound to big business to the exclusion of all other principles.

The EPA was created by President Richard Nixon in 1970 with wide bipartisan support because cities and towns throughout America were so polluted that people were literally sick and dying. Nearly half a century ago, everyone understood that pollution was creating a huge drag on the economy even as beautiful places were desecrated.

Most economists argue that it’s both efficient and cost-effective to stop pollution at its source. The 1990 Clean Air Amendments under President George H.W. Bush will have saved 230,000 American lives by 2020, cut heart attacks by 200,000 cases, and restored 17 million days of work that would otherwise have been lost. Analysts argue that the payoff is at least thirty to one, with others supporting a ninety to one return on pollution-cutting investments.

Similarly, the renewable energy industry is booming and creates jobs at a clip that far exceeds the outdated fossil fuel economy. Over the last three years, US employment in solar and wind industries has increased by 82 percent and 100 percent respectively according to the International Renewable Energy Agency. That job creation boom is 17 times higher than most other sectors, yet Pruitt and his advisors want to cut that growth off at the knees.

To that end, the EPA is now the voice of industry. In a display of Orwellian doublespeak, Pruitt argues that adding advisors from the lobbyist American Chemistry Council, the French petroleum company Total, Procter & Gamble, and Dow Chemical will make his team independent and free of conflicts of interest. They are bringing “fresh perspectives” and “geographical representation” to EPA decisions, something he feels was sorely lacking in previous EPA advisory councils.

“Pruitt is turning the idea of ‘conflict of interest’ on its head,” said Andrew Rosenberg, director of the Centre for Science and Democracy at the Union for Concerned Scientists. “He claims federal research grants should exclude a scientist from an EPA advisory board but industry funding shouldn’t.

“The consequences of these decisions aren’t just bad for a few scientists. This could mean that there’s no independent voice ensuring that EPA follows the science on everything from drinking water pollution to atmospheric chemical exposure.”