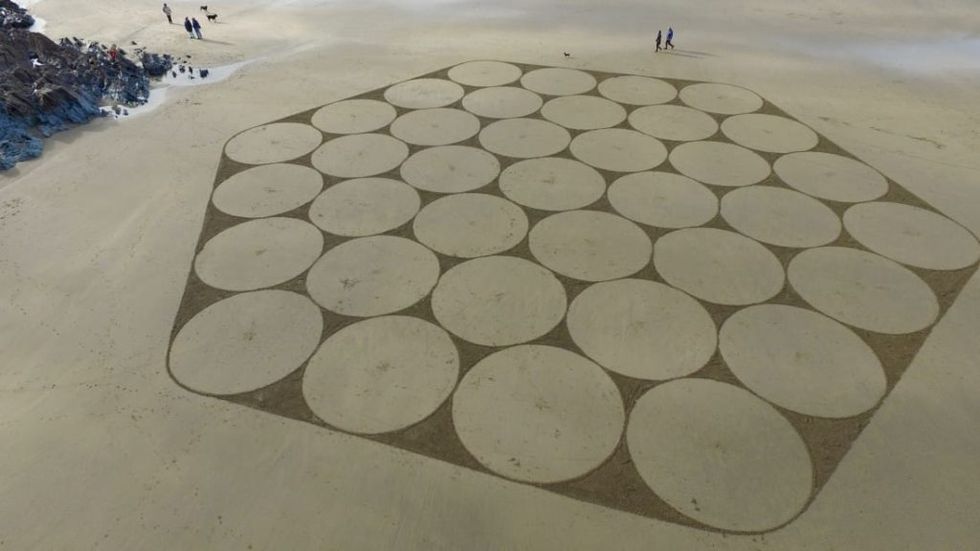 We expect to encounter the beauty of nature at the beach, but too often instead beachgoers encounter trash, pollution, and excessive development on the world’s shorelines. A growing number of sand artists want to show another way humans can leave their mark on the beach: Temporarily. Sand artists create stunning works of art designed to dissolve in the oceans’ tides.

Visitors to the Welsh Pembrokeshire Coast in Britain might encounter artist Marc Treanor’s astonishing works of art — if they time their visit to the beach just right. Pembroke’s enormous, ornate sand carvings, which he creates simply by raking the sand, take hours to create and last just a few hours. They require no toxic materials, consume no resources, harm no species, and will never require disposal.

"It's completely part of it, it's totally integral to the work and the fact it is impermanent and it is temporary," Treanor says.

He takes inspiration from mandalas, crop circles, and other geometric patterns, and begins with a sketch on a paper at home. Then he heads to the beach with his rake and begins work. The finished works are so large that sometimes strangers join in and help him create them. They are best viewed from above, so the artist and beachgoers climb up on nearby cliffs to catch a photo — quickly, before they wash away.

Environmental artist Tony Plant says the Internet helps more people experience his art, long after it has washed away. In the tradition of “leave only footprints, take only pictures,” his work is meant to be low impact, but through shared images, can continue to delight people long after the waves wash it away.

“I can literally make a piece of work and know that maybe one or two or three people have seen it,” Plant says. “Put an image online and then it goes, and it can literally go around the world with a click of a button. That becomes very, very powerful: the way the image travels through social media.”

That's a different scale of sand art to Tony Plant who does these amazing temporary images with a rake! http://t.co/hxtLiYThP8
— Archi_Jam (@Archi_Jam) 1393149261.0

These artists are doing more than just playing in the sand: They are making viable careers. Sand artists ply their skills at weddings and special events, and even have their own talent agencies. Plant’s work appears in a music video by Light Colours Sound for recording artist Ruarri Joseph. Treanor has worked with local councils on projects designed to bring in tourism, and he joined three other sand artists on a project for the European Environment Bureau on a piece designed to raise awareness about the problem of plastic pollution in the oceans. Their creation featured an elaborate sand drawing of Poseidon rising from the ocean to throw a plastic bottle back to the land.

Many sand artists focus on environmental messages, drawing attention to the plight of the oceans and the conditions of the beaches on which they work. Others hope to inspire humanity. On November 11, the 100th anniversary of Armistice Day, 30 beaches around the UK will feature sand art to recognize the sacrifice of the men and women who lost their lives during the First World War. A group of sand artists called Sand in Your Eye will create images of the fallen upon the beaches of Clacton and Great Yarmouth. In 2013, the group marked D-Day by creating “The Fallen,” 9,000 silhouettes of fallen soldiers carved on Arromanches Beach in Normandy, France, the site where that many lives were lost during World War II.

“Beaches are truly public spaces, where nobody rules other than the tide. They seem the perfect place to gather and say a final goodbye and thank you to those whose lives were taken or forever changed by the First World War,” said film director Danny Boyle, an organizer behind the event, called “Pages of the Sea.” “I’m inviting people to watch as the faces of the fallen are etched in the sand, and for communities to come together to remember the sacrifices that were made.”

Not all sand art has a social message, though. Simon Beck has created sand images to honor John Lennon, Yoga, and videogames. His enormous creations take about nine hours to complete, and he estimates he walks 12 miles within each one as he crosses the beach with his rake, over and over again. Capetown artist Andrew van der Merwe earns a living as a calligrapher, but when he’s not lettering formal invitations and documents, he hits the sands, where he calls himself the world’s only beach calligrapher. He writes names, messages, and poetry on the beach in a distinctive deep hand.

Many of the world’s artists create their images for the sheer pleasure of the experience, and if no one is on the beach while they work, their work may be not just fleeting but anonymous, appearing out of nowhere, creating questions for those who stumble upon it. These temporary works can be attributed only to a mysterious artist known as “Sandbanksy.”