He never had it, Pat. 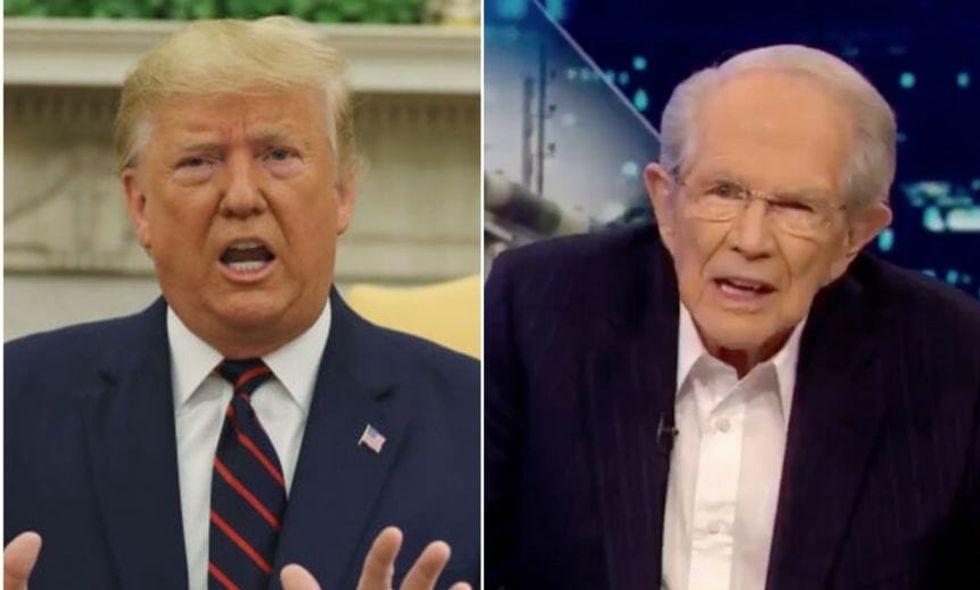 "Imminent Invasion" were the words projected onto the screen behind far-Right Christian Evangelist Pat Robertson while hosting CBN's The 700 Club, but, for once, he wasn't spreading fear and misinformation about refugees or immigration to the United States.

In fact, he was lambasting President Donald Trump.

Despite numerous instances of adultery and deceit, Robertson has stayed almost completely loyal to Trump. However, the staunch Evangelical Republican didn't mince words when calling out Trump's sudden announcement of a withdrawal from northern Syria.

"I want to say right now I am absolutely appalled the United States  is going to betray those Democratic forces in Northern Syria," Robertson said, "And we're possibly gonna allow the Turkish to come in against the Kurds."

After calling Turkish President Recep Erdoğan a "thug" and a "dictator," Robertson turned his sights to Trump:

"The President, who allowed [the late Washington Post Reporter Jamal] Khashoggi to be cut into pieces without any repercussions whatsoever is now allowing the Christians and the Kurds to be massacred by the Turks, and I believe—and I want to say this with great solemnity—the President of the United States is in danger of losing the mandate of Heaven if he permits this to happen."

It's rare that this sentence gets written, but Pat Robertson is right—at least about the increased vulnerability of the Kurds to Turkish forces.

The "mandate of Heaven" high horse left the barn a pretty long time ago.

@RightWingWatch Who’s going to break the news to Pat that the only mandate Trump has is from Putin?
— Eileen Becker (@Eileen Becker) 1570471329.0

@RightWingWatch lol..."the mandate of Heaven." But he didn't lose it over allowing Kashoggi to be cut to pieces with no repercussions.
— Danko Ramone (@Danko Ramone) 1570470565.0

Though Trump having the "mandate of Heaven" is laughable to many Americans, Trump's hold on white Evangelical voters is no laughing matter. Seventy-eight percent of them voted for Trump in 2016. If Robertson revokes the so-called mandate from Trump, it's unclear which idol white Evangelicals would choose: Trump or Robertson.

Furthermore, with the announcement of its withdrawal, the United States has agreed to let Turkey proceed in a takeover of the Northeast Syrian border. Without U.S. forces, Syrian Kurds are heavily outmatched, all but ensuring a Turkish victory. In addition to leaving the Middle East more vulnerable to a resurgence of ISIS forces, many also predict that a Turkish campaign of Kurdish ethnic cleansing is all but imminent.

The USA has given Turkey and the rebel groups they back the green light to carry out ethnic cleansing against Kurds… https://t.co/LUnC8FSGVr
— Kae Kurd (@Kae Kurd) 1570437886.0

Read this thread.... and let’s speak out in defense of the Kurds. This is likely to be a religious and ethnic clean… https://t.co/gnIoLofxcN
— Jonathan Morris (@Jonathan Morris) 1570457230.0