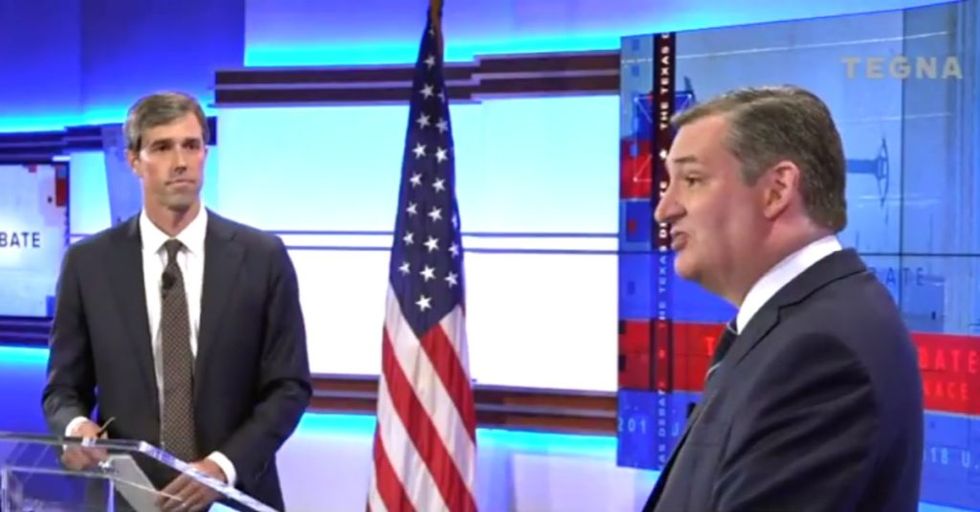 After Cruz made a reference to O'Rourke's voting record in the House of Representatives, O'Rourke stated:

"This is what you can expect over the course of this debate. Senator Cruz is not going to be honest with you. He’s going to make up positions and votes that I’ve never held or have ever taken."

"He’s dishonest. It’s why the president called him ‘Lyin’ Ted,’ and it’s why the nickname stuck, because it’s true."

Cruz snickered throughout the statement from O'Rourke, but Cruz brought up the President numerous times during the debate when he spoke of his own positions on matters. Cruz hopes to convert any support for Trump in Texas into votes for himself.

Later in the debate, O'Rourke asked Cruz why—if he had as close a relationship with Trump as he claimed throughout the debate—did that closeness not translate to benefits for the people of Texas. O'Rourke also invoked the words of the President again, stating Cruz was "all talk and no action" when it came to his support of women and the Me Too movement.

President Trump endorsed Cruz earlier this year, with a standard form tweet containing the same talking points as all of his GOP endorsements: tough on crime and the border and supports military, veterans and the 2nd amendment.

One supporter of O'Rourke even put a Trump tweet on the side of a truck that is making the rounds in Texas.

The formulaic Trump tweet again drew mockery online with people revisiting some of the more personal, less standardized Twitter posts Trump made about Ted Cruz, including one where the President attacked Cruz's wife.

As well as bringing up Cruz's own statements about the President.

Cruz had some harsh words for Trump as well until after he won the Republican nomination.

Beto is hammering @tedcruz on taking special interest money. This is one of the first exchanges where it feels like… https://t.co/eoqlGGguIO
— Tommy Vietor (@Tommy Vietor) 1539740546.0

I thought the Texas debate was O'Rourke's by a close split decision. Cruz was so locked into his scripted pitch tha… https://t.co/Cdfem1rga7
— Charles P. Pierce (@Charles P. Pierce) 1539752954.0

However the only opinions that matter in the end are those of the people of Texas. Polls opened today in Texas for early voting.

Midterm elections across the United States and US territories are slated for Tuesday, November 6, 2018.