"We Would Oppose," Say Tech Giants To Trump Proposal 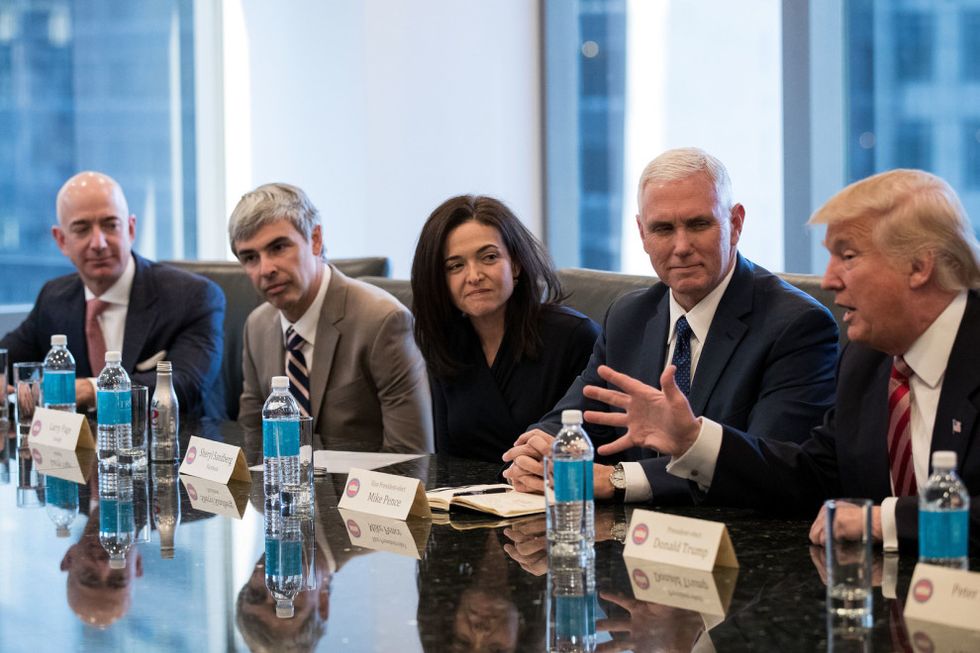 After Buzzfeed published an email accidentally sent to its news division by a Facebook spokesperson who dismissed President-elect Donald Trump's proposed Muslim registry––calling it a "straw man"––and advised the company's PR to remain silent, Facebook was forced to clarify its position, saying that no one "has asked us to build a Muslim registry, and of course we would not do so.”

The incident prompted several other tech companies to break their silence.

In a statement issued yesterday, an Apple spokesperson said, “We think people should be treated the same no matter how they worship, what they look like, who they love. We haven’t been asked and we would oppose such an effort.”

A spokesperson for Google also weighed in: “In relation to the hypothetical of whether we would ever help build a ‘muslim registry’ - we haven’t been asked, of course we wouldn’t do this and we are glad - from all that we’ve read - that the proposal doesn’t seem to be on the table,” they said.

Uber issued a terse "No," in response to the same questions, clarifying it would not help build or provide data for a Muslim registry.

These are the latest and most high-profile Silicon Valley players to go on record refusing to comply with the building of such a database. Tech companies found themselves facing considerable pressure to respond after The Intercept began asking similar questions about the subject earlier this month; its reporters approached nine tech companies and only received a response from Twitter, which said it would never participate in such a project.

Tech companies were increasingly scrutinized after IBM CEO Ginni Rometty offered both her congratulations and the services of her company in a personal letter to the president-elect, saying, "I know that you are committed to help America’s economy grow in ways that are good for all of its people.” Additionally, Rometty referred to the tax system as "outdated and punitive," and said Trump's proposed tax rate of 10 percent will “free up capital that companies of all sizes can reinvest in their U.S. operations, training and education programs for their employees, and research and development programs.” She then laid out several ways in which IBM could assist Trump with his national agenda. These services include:

The separate areas Rometty "identified as potential business opportunities between a Trump White House and IBM were all inoffensive and more or less mundane," writes journalist Sam Biddle, "but showed a disturbing willingness to sell technology to a man with open interest in the ways in which technology can be abused: Mosque surveillance, a “virtual wall” with Mexico, shutting down portions of the internet on command, and so forth. Trump’s anti-civil liberty agenda, half-baked and vague as it is, would largely be an engineering project, one that would almost certainly rely on some help from the private sector."

Throughout an often incendiary campaign,  Trump repeatedly stated he would want a Muslim registry and admonished Muslims for not reporting more terror suspects. In fact, he elaborated on his plans for a Muslim registry during the second presidential debate,

suggesting that Hillary Clinton, his Democratic opponent, would threaten the security of the country by allowing Syrian refugees on American soil:

It is called extreme vetting... people are coming into our country like we have an idea of who they are and where they are from and what their feelings about our country is, and she wants 550 percent more. This will be the great Trojan horse of all time.

Kris Kobach, the Kansas Secretary of State and a member of the president-elect's transition team, also indicated that Trump's administration might revive the National Security Entry-Exit Registration System (NSEERS), a Bush-era program that registered thousands of immigrants (most of them Muslim) which Kobach himself helped design.

Earlier this week, Alphabet CEO Larry Page, Apple CEO Tim Cook, and Oracle CEO Safra Catz all attended a high-profile tech summit hosted at Trump Tower on Tuesday. A host of other prominent tech executives, including Facebook COO Sheryl Sandburg and Microsoft CEO Satya Nadella, joined them. The summit had no formal agenda, but the discussion focused on jobs and trade deals.

We, the undersigned, are employees of tech organizations and companies based in the United States. We are engineers, designers, business executives, and others whose jobs include managing or processing data about people. We are choosing to stand in solidarity with Muslim Americans, immigrants, and all people whose lives and livelihoods are threatened by the incoming administration’s proposed data collection policies. We refuse to build a database of people based on their Constitutionally-protected religious beliefs. We refuse to facilitate mass deportations of people the government believes to be undesirable.

Two companies did not respond to Buzzfeed's request for comment on whether they would help build or provide data for a Muslim registry. One of these was Amazon, whose CEO, Jeff Bezos, is one of Trump's harshest critics. The other was Oracle, which also declined to say whether the National Security Agency is still an Oracle customer. Oracle refusal to comment came one day after its CEO, Safra Catz, announced she would join Trump's transition team.