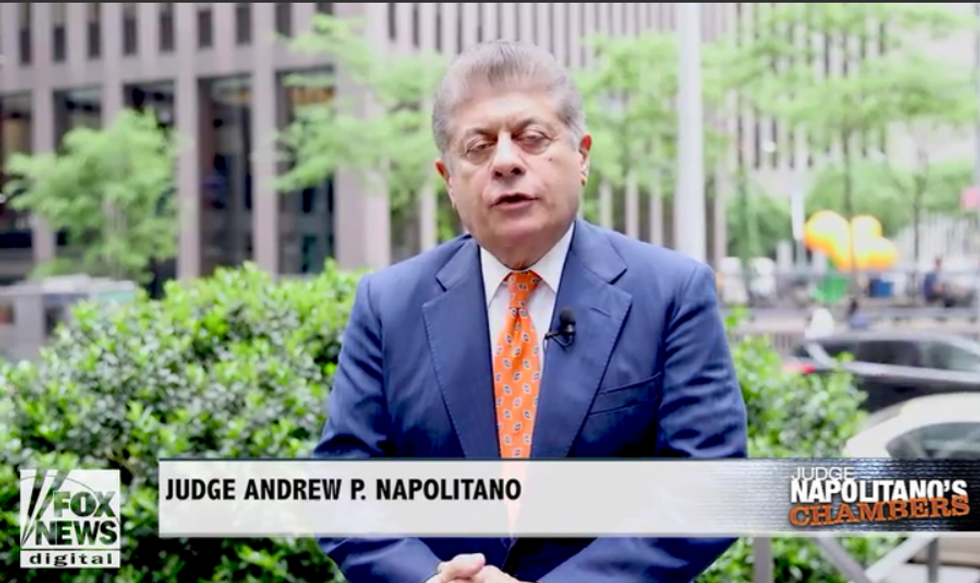 But Andrew Napolitano, who served as a New Jersey Superior Court judge for over a decade, says Giuliani also acts as a public relations pundit for his boss. It is to that end, discrediting the investigation while bolstering his employer's standing, that Giuliani made his statements according to Napolitano.

"When Rudy Giuliani last weekend said that the Bob Mueller investigation of Russian involvement with the Trump campaign was rigged and was illegitimate, did he really mean that?" Napolitano asked. "I don't think so."

I think he is too smart to have said what he knows was an untruth.”

In other words, Napolitano says Giuliani is lying and is aware he is lying.

"When you call an investigation rigged," the former judge continued, "you mean the outcome has been predetermined. You mean that it's not been fair."

"It’s not the duty of the prosecutors to be fair, and Giuliani, one of the great prosecutors in the history of New York City, knows that," he added. "Prosecutors pick a target they think is probably guilty and then look for enough evidence to indict and then try that target. They leave fairness up to judges and juries."

"But why would he have said Bob Mueller is unfair, the investigation is rigged and illegitimate?" Napolitano then asked.

"Is [the investigation] legitimate? Of course it's legitimate," the Fox News legal expert added. "It's done, the investigation came about, pursuant to a rule in the federal rules of criminal procedure which congress approved of."

Mueller was appointed by Rod Rosenstein the number two person in the Department of Justice, who himself was appointed by President Trump. Six different federal judges have ratified the Mueller investigation. The president himself even ratified a portion of the Mueller investigation when he imposed sanctions on the Russian intelligence agents whom Mueller indicted for meddling in the 2016 presidential campaign."

As always, Napolitano ended his segment with the message to "fight the good fight, for freedom."

Unfortunately, the legal analysis by a qualified individual fell on mostly deaf ears among Fox News viewers. Responses to the segment were summed up in the one word most respondents left: no.

@Judgenap There was never evidence that wasn't created which substantiated it's legitamacy. Actually there's more p… https://t.co/tVlmzRGicR
— Richard A. Smith (@Richard A. Smith) 1527708732.0