Rudy Giuliani Goes Off the Rails in Fox News Interview About His Ukraine Role, Yells at Guest to 'Shut Up, Moron!' 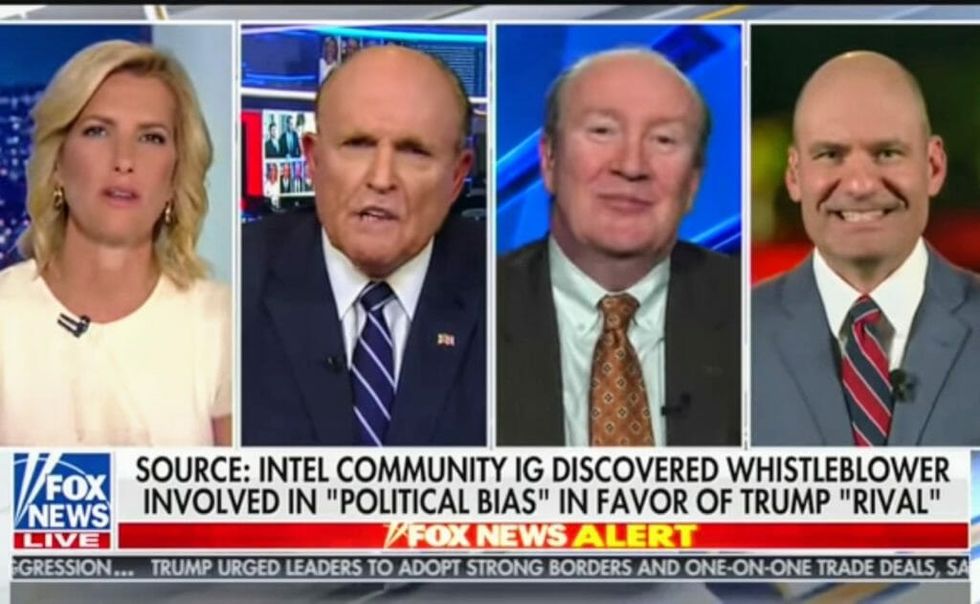 As speculation then official word of the impeachment inquiry into President Donald Trump spread, members of Trump's team showed signs of stress. One of those showing the anxiety anyone under investigation for multiple violations of federal law would was Trump's personal lawyer, former New York city mayor Rudy Giuliani.

Ever since news of a whistleblower report involving a call between Trump and Ukrainian President Volodymyr Zelensky broke, Giuliani made multiple public appearances as the public mouthpiece of the President. Giuliani—as Trump's employee—is not under all the restrictions that should apply to official members of the federal government.

In an appearance on Fox News where host Laura Ingraham held a panel discussion with Democratic strategist Chris Hahn, author Andy McCarthy and Giuliani. As McCarthy finished his remarks, Ingraham brought back the full panel.

"I’d like to say to you, Mr. Hahn, I should sue you for libel. You usually say incredibly stupid things."

Earlier Hahn called Giuliani's repeated remarks against former Vice President Joe Biden and his son Hunter libelous, accusing the Trump camp of "making things up" about the State Department asking Giuliani to please gather evidence against Biden and to contact the Ukrainian President's team to do it.

After Giuliani's assertion that he should sue Hahn, the panelist replied to Giuliani saying:

"You’re a public figure, so then you know the libel law."

Which is when Giuliani had his outburst, saying:

"Shut up, moron! Shut up! Shut up! You don’t know what you’re talking about, idiot!"

Trump's lawyer then appealed to longtime Trump fan Ingraham to make Hahn stop responding to his comments directed at Hahn. Ingraham then asked Hahn to remain silent so Giuliani could talk about Hahn without interruptions.

Giuliani had been on a media blitz tour, similar to the ones he had done before other Trump scandals, to place responsibility for his and the President's interaction with the Ukrainian government as a mission created and directed by the State Department and not an attempt to help Trump's 2020 presidential campaign.

Giuliani made the same claim on an appearance with Sean Hannity where he appeared with no one to dispute his claims.

People called Giuiani's appearance on Ingraham's program where he did get pushback for his unsubstantiated claims a meltdown and a sign of panic in the Trump camp.

@washingtonpost @rickcatino @RudyGiuliani @realDonaldTrump Rudy, I can only hope that you end up in the same cell… https://t.co/QtPSzaD3Z6
— Boston Rick (@Boston Rick) 1569414611.0

@washingtonpost My oh my, how times have changed! I think it's about time to discontinue the term "administration"… https://t.co/8MPxhz4UzZ
— StarNavBySea (@StarNavBySea) 1569415932.0

On Tuesday afternoon, the House of Representatives announced a formal impeachment inquiry would begin for President Donald Trump regarding the request for foreign interference in the 2020 election, emoluments clause violations, obstruction of justice and other crimes and misdemeanors.

The book It's Even Worse Than You Think: What the Trump Administration Is Doing to America is available here.

"No journalist knows Donald Trump better than David Cay Johnston, who has been following him since 1988. It's Even Worse Than You Think: What the Trump Administration Is Doing to America goes inside the administration to show how the federal agencies that touch the lives of all Americans are being undermined."