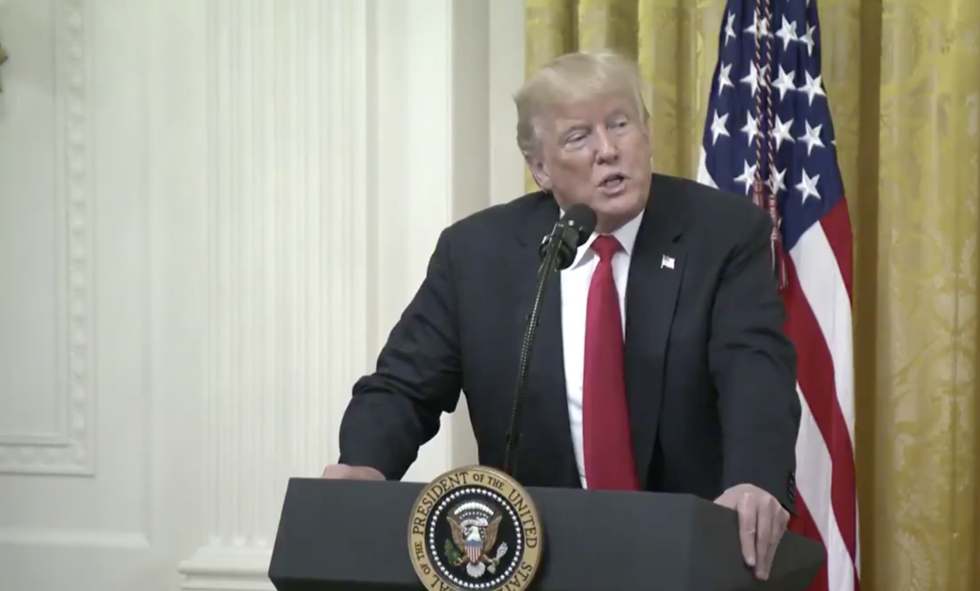 "These results are basically in line with Monmouth’s findings over the past few months," Monmouth notes, "although they are slightly more negative than June’s 40% right direction and 53% wrong track rating."

Additionally, Monmouth reports that the president's overall approval rating stands at 43 percent approve and 50 percent disapprove. These numbers are "basically in line" with where President Trump's approval rating has been since January, though "they are slightly more negative than the last Monmouth poll taken immediately after the president’s meeting with North Korean leader Kim Jong Un in June (43% approve and 46% disapprove)."

The latest Monmouth University Poll also tracked public opinion on a couple of major administration initiatives. Regarding Trump’s decision to impose tariffs on a range of products imported from our trading partners, more say this will hurt (38%) rather than help (28%) the U.S. economy.  Another 4% feel this will have no impact and 29% are unsure. This marks only a small improvement since June, when 40% said Trump’s tariffs would hurt the national economy and 25% said they would help.

The poll notes that much recent news has focused more on the president's circle of advisers rather than his policies, and the spate of negative news coverage––the president's feud with former adviser Omarosa Manigault Newman, for example––has many Americans convinced that Trump hires, as he has often claimed, only "the best people."

“Some observers who were lukewarm about the prospect of a Trump presidency believed that a decent set of advisers would keep him on an even keel. However, fully four in ten Americans have no confidence whatsoever in the people currently advising the President of the United States. That cannot be good,” said Patrick Murray, director of the independent Monmouth University Polling Institute.

Omarosa Manigault Newman, the former Apprentice contestant whose book, Unhinged: An Insider's Account of the Trump White House, has dominated headlines over the last week, is an example of a lackluster presidential appointment. 54 percent of those surveyed feel that the president "did not show good judgment" when he hired Manigault Newman to work in the White House. Comparatively, only 17 percent believe the appointment "showed good judgment" and 28 percent offered no opinion whatsoever. Even Republicans are divided on the matter, with 45 percent saying Trump's decision to hire Manigault Newman was a "mistake" rather than "a show of good judgment on Trump's part."

“Neither Trump nor Omarosa are coming out of their association in a particularly good light,” said Murray. (Trump, in response to Manigault Newman's claim that there exist tapes of Trump saying the "N-word" on the set of The Apprentice,referred to her as a "dog," sparking national criticism that he evoked racist language in his use of the phrase to characterize an African-American woman.

The trial of Paul Manafort, the president's former campaign adviser, has drawn a "more mixed assessment":

While Manafort never officially served in the White House, he remained a Trump confidant after the 2016 election according to reports. Just under half of the public believes the Manafort charges suggest there may be widespread illegal activity among White House staff (45%) while nearly as many do not believe that this case necessarily suggests there is similar activity by White House staff (38%). These results include the expected partisan split, with 68% of Democrats saying the Manafort case suggests widespread illegal activity and 65% of Republicans saying it does not.

The charges now facing Manafort grew out of the special counsel’s investigation into Russian interference in the 2016 election and possible links with the Trump campaign, but they are not directly related to that investigation. The current trial is seen by 29% of the public as a result of prosecutors just following the evidence while 16% say the case was driven mainly by political motives. A plurality of 42%, though, say that both reasons played a role in bringing the present case to trial...

“This is going to be a long saga. The verdict in this trial could affect public opinion, but there is also a second Manafort trial to come that could also have an impact. And then there’s the actual Russia investigation itself, where opinion has been fairly stable over the past few months,” said Murray.