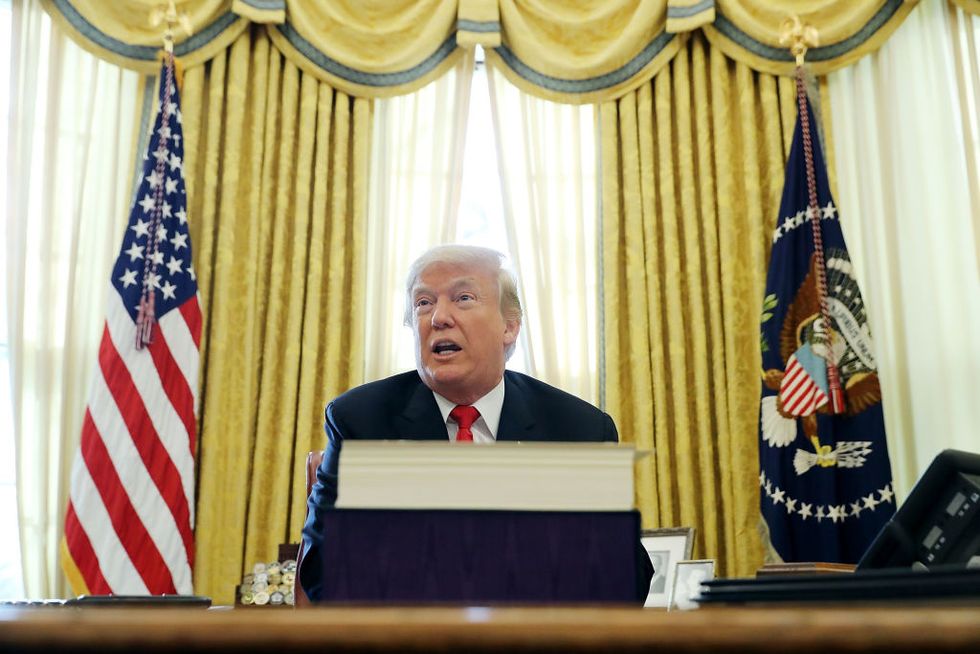 Donald Trump may be the current president, but his predecessor, Barack Obama, is the most admired man for 2017, according to the latest Gallup poll. Obama edges out his successor 17 percent to 14 percent. The same poll shows that Hillary Clinton edges out former First Lady Michelle Obama, 9 percent to 7 percent.

"Obama has now been named the most admired man 10 times, trailing only Dwight Eisenhower, who earned the distinction 12 times," Gallup's Jeffrey Jones notes. "Obama won all eight years he was president, plus 2008 -- the year he was first elected -- and this year, his first as a former president."

"Trump’s unpopularity is holding him back from winning the most admired distinction," writes Jones. "The incumbent president is the usual winner, since he is arguably the most prominent figure in the country -- but when the president is unpopular, other well-known and well-liked men have been able to finish first. Obama, like Hillary Clinton, may fade in prominence the longer he is out of office. Former presidents commonly make the top 10 list but rarely win, with Obama only the second to do so, along with Eisenhower in 1967 and 1968."

Clinton has been named "most-admired" more than any other woman or man in Gallup’s polling history: 22 times in total. This is the 16th consecutive year Clinton has been the most admired woman, but Jones notes that Clinton saw her share of the vote reach its lowest point in 15 years:

The 9% who name Clinton is the lowest percentage she has received since 2002, when 7% named her in another close first-place finish. Clinton won the title this year in the same poll she registered a personal low favorable rating. This indicates she remains top of mind for enough people who like her to be named more than any other woman in response to the open-ended question, finishing ahead of some women who may be better liked overall but are not as prominent in people's minds.

Rounding out the list of most admired women are Oprah Winfrey (with 4 percent of votes), Senator Elizabeth Warren (D-MA), who commands 3 percent of the votes, German Chancellor Angela Merkel and Queen Elizabeth II (both at 2 percent each), and former U.S. Secretary of State Condoleeza Rice, First Lady Melania Trump, U.S. Ambassador to the United Nations Nikki Haley, Duchess Catherine "Kate" Middleton, and Beyonce Knowles (all at 1 percent each).

The results of the Gallup poll are based on telephone interviews conducted Dec. 4-11, 2017, with a random sample of 1,049 adults, aged 18 and older, living in all 50 U.S. states and the District of Columbia. The margin of sampling error is ±4 percentage points at the 95 percent confidence level. All reported margins of sampling error include "computed design effects for weighting" and each sample of national adults "includes a minimum quota of 70 percent cellphone respondents and 30 percent landline respondents, with additional minimum quotas by time zone within region." Landline and cellular telephone numbers "were selected using random-digit-dial methods."

The president's unpopularity has continued to grow if the results of a Quinnipiac poll released last week are any indication. 59 percent of American voters say Trump's job performance is poor, citing his moral character deficits. Trump received low marks despite the 63 percent of those surveyed who said the economy is “excellent” or “good.” Even so, more people credited former President Barack Obama (45 percent, including 29 percent of Republicans) than Trump (29 percent) for that success.

The president’s grades on most character traits are as follows:

Those who participated in the survey gave Trump negative ratings for the way he has handled several key issues:

Even more damning: Fifty percent of American voters, including 59 percent of women and 41 percent of men, say Trump should resign because of the sexual assault allegations against him. Democrats (85 – 12 percent) have been the most vocal about calling for Trump’s resignation. Independents are more finely split (52 – 44 percent) while the overwhelming majority of Republicans 92 – 7 percent say the president should not resign.

till, the poll notes, voters are divided 44 – 44 percent “on whether they approve of how the Democratic Party is handling the issue of sexual harassment and sexual assault in politics” (which is an improvement on the negative 30 – 52 percent approval rating December 6). By contrast, voters disapprove 65 – 23 percent of how the Republican Party is handling sexual harassment and sexual assault in politics, and Republicans only approve by a “lackluster” 46 – 37 percent.

The survey results also show that most people (66 – 30 percent) believe Trump does not respect women as much as he respects men. Those numbers include 73 – 25 percent among women and 59 – 36 percent among men.

“Confidence in the economy is eclipsed by profound doubts about the president’s level headedness, honesty, empathy for fellow Americans and handling of foreign policy,” said Tim Malloy, assistant director of the Quinnipiac University Poll. “A big bag of coal under the Mar-a-Lago tree from a voting public that has little confidence in the president.”

Quinnipiac University surveyed 1,230 voters nationwide from December 13 – 18 with a margin of error of +/- 3.3 percentage points, including the design effect. Live interviewers called landlines and cell phones.