Jared Kushner Just Explained What Makes Him Qualified to Work in the White House, and People Can't Even 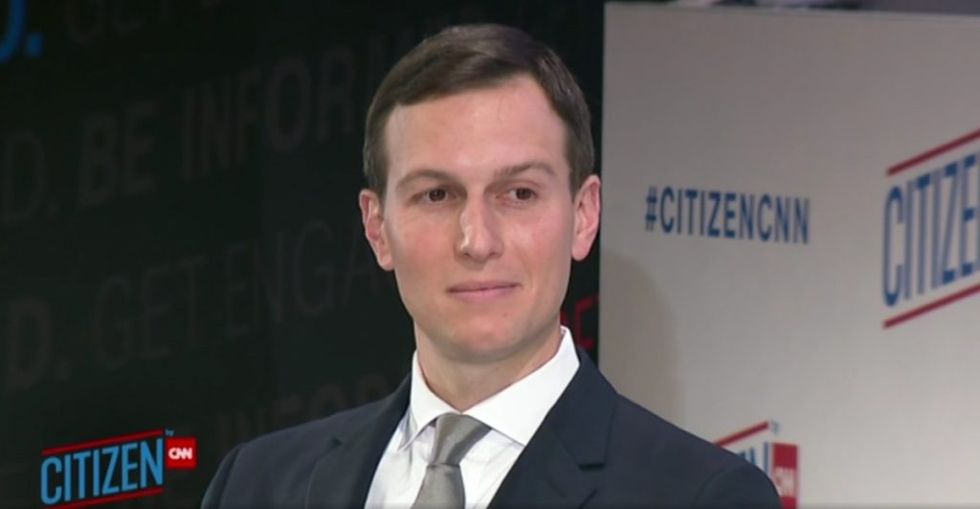 In a Citizen by CNN event interview being criticized as full of softball questions, White House Senior Adviser Jared Kushner answered questions about whether he was "having fun" and his father-in-law, President Donald Trump, as a grandfather. But between the fluff, host Van Jones did ask one question people wanted answered.

"How did you get this job? You have like the dopest job in the world, the secretary of everything...how did you wind up in this position?"

Van Jones interview Kushner at "Citizen by CNN" event starting now. Jones asks, "How did you get this job? You have… https://t.co/XZf0s7GMWf
— Maggie Haberman (@Maggie Haberman) 1540217113.0

He further pointed out that Kushner had a very small resume, but a massive amount of access and responsibilities under President Trump. Jones asked why the people of the United States should have confidence in his abilities.

As opposed to listing qualifications in management or government, Kushner did little to dispel the criticism that his position in the Trump administration boils down to nepotism. His wife, Ivanka Trump, faces the same critique over her role in the White House.

"I think the first thing is the president trusts me."

"I don’t make a lot of noise. I know noise is sometimes made about me but I try to keep my head down."

The Senior Adviser to the President went on to repeatedly refer to Trump as his "father-in-law", not helping his case that his position in the administration did not result from nepotism.

Kushner on working with his wife, Ivanka Trump: “Working together has given me an even greater appreciation for jus… https://t.co/esu8JomW66
— CNN Politics (@CNN Politics) 1540220148.0

Kushner's response does align with Trump's value of loyalty and trust over expertise or ability when assembling his administration. However several of those selections already bit Trump in the behind.

For example, Trump brought in reality TV star Omarosa Manigault for a White House position. But after clashes with other members of the staff, Chief of Staff John Kelly forced Manigault out.

She immediately signed a book deal for a tell-all that failed to flatter anyone in the Trump campaign or the White House.

Other loyal Trump supporters like Scott Pruitt and Rob Porter resigned under a cloud of scandal and controversy. Trump's propensity to pick loyal people over qualified people continues to draw criticism.

People pointed to the many other people the President trusted as a strike against Kushner, not an endorsement. Others criticized

@CNNPolitics Any treachery, he has it covered. Invisible genius-We see you. #bloodallovereverything#askjared
— Coney Denizen (@Coney Denizen) 1540218681.0

Others criticized CNN for not asking more in depth questions.

@CNNPolitics BS to which Van Jones should have repeated the question again and asked for a real answer
— PerS!ster (@PerS!ster) 1540218747.0

@CNNPolitics What’s been shown of this soft lob interview is pitiful. Jones’ assertion about doing the interview to… https://t.co/WurEfB0kir
— Lili Torres (@Lili Torres) 1540232849.0

@CNNPolitics @CNNPolitics please do not use @VanJones68 ever again for interviews that need to hard hit on getting… https://t.co/fKtKgvCWJd
— Glencia (@Glencia) 1540232129.0

@CNNPolitics This was a travesty... Is Van Jones angling to be the next token staffer in the WH? Get him off of t… https://t.co/JOchyEhSpW
— LutherKrank (@LutherKrank) 1540230647.0

Kushner rarely gives interviews. People overwhelmingly panned this sit down with Van Jones as nothing but a propaganda puff piece. But at least people now know, straight from Kushner himself why he has a position in the White House: his father-in-law trusts him to be loyal to Trump.