Trump Loving Pastor Scolds Greta Thunberg, Says God Promised Not to 'Flood the World Again' in the Book of Genesis 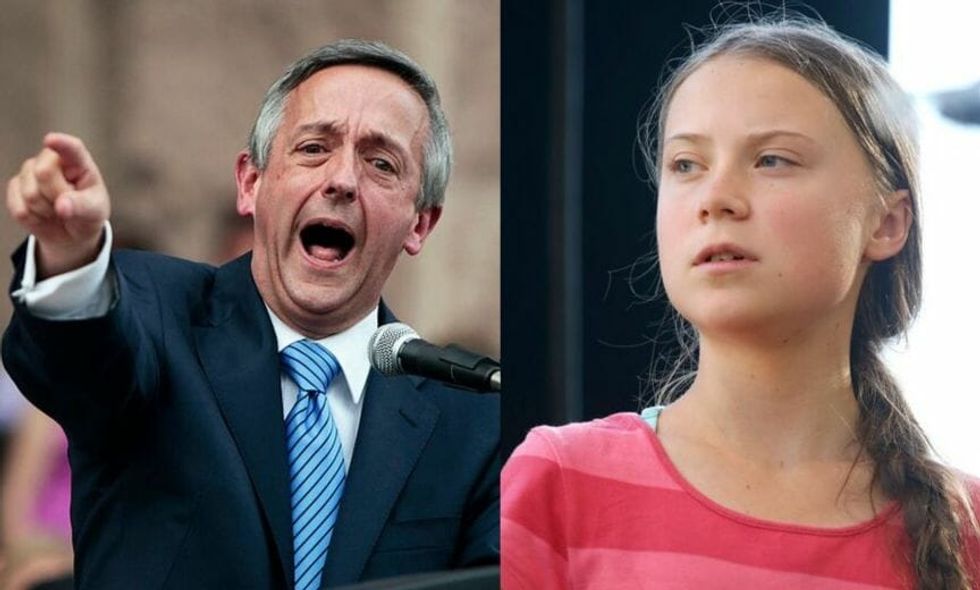 However, Pastor Robert Jeffress—an Evangelical Christian minister and vehement supporter of President Donald Trump—proclaimed that perhaps Thunberg should consult quite a different document.

On Monday, during the United Nations climate summit, Jeffress was a guest on Fox Radio's Todd Starnes Show. Thunberg and the Climate Crisis were on his radar.

After repeating the conservative claim that climate change is an "imaginary crisis," Jeffress set his sights on Thunberg.

"Somebody needs to read poor Greta Genesis, Chapter 9 and tell her the next time she worries about global warming, just look at a rainbow."

"This whole global warming, tree-hugging fiasco—again, there is nothing to it. As you point out, they might as well hold a commission on the Tooth Fairy or Bigfoot, Sasquatch."

You can watch the comments here.

For those unfamiliar with the Bible, Genesis Chapter 9 involves Noah, the end of the great flood and God's covenant with animals (including human) kind. God says their bow in the clouds each time it rains will remind them to stop the rainfall and never allow rain to flood the Earth and destroy all plant and animal life again.

Rain. It's a covenant about flooding as a result of unending rain.

It seems Pastor Jeffress might need to brush up on his Bible himself. Or read the IPCC report—maybe Greta will read it to him.

Their concern is over melting polar ice caps, ice sheets and glaciers throughout the world that are disappearing at an alarming rate and ahead of previous projections. This raises both ocean water levels and temperatures.

God failed to mention that in Jeffress' Bible reading recommendation.

Jeffress got little backing for his "don't worry, look at rainbows" approach to climate change.

What an imbecile Pastor Robert Jeffress is. Not only praising that cretin Donald Trump but suggesting Greta Thunb… https://t.co/Uo6QC7Fvem
— Madincroydon (@Madincroydon) 1569371625.0

@Newsweek Which is exactly why #religion is a BAD thing and might actually destroy humanity. https://t.co/iRUQdXpbwf
— David Spondike (@David Spondike) 1569433885.0

In addition to their ignorance of science, Jeffress and Starnes displayed a pervasive ignorance about young activists in general and of people with Asperger's Syndrome specifically. Starnes and Jeffress portrayed Thunberg and others as helpless victims "weaponized" by liberals.

Many refer to Thunberg as mentally ill, then cite her Asperger's diagnosis.

Greta Thunberg is the opposite of "mentally ill" when she crusades for climate sanity. The "mental illness" is on… https://t.co/SoHh7RFyuO
— Allen Frances (@Allen Frances) 1569335282.0

ASD is not a mental illness, nor is Asperger's Syndrome. And mental illness is not a reason to disregard a person's valid and verifiable views on any topic.

According to Dr. Melissa Conrad Stöppler, people with Asperger's syndrome have normal to above-average intelligence. Experts in ASD stress the gifts and positive aspects of Asperger's, considering it to represent a different but not necessarily defective way of thinking.

But conservative Christians like Jeffress continue to question Thunberg's intelligence because... autism.

Dr. Stöppler reported the positive characteristics of people with Asperger's include: