Donald Trump Jr. and James Woods Just Went After Chelsea Handler in the Most Juvenile Sexist Way, and Twitter Is Destroying Them 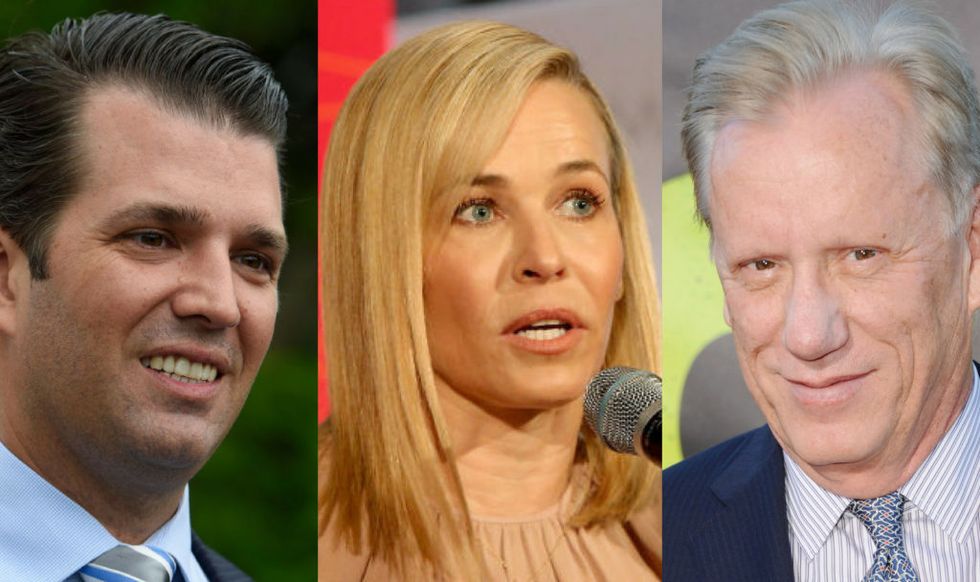 Handler, a vocal critic of the Trump administration, tweeted that she couldn't wait for Don Jr. to flip on his father--referring to the investigation of possible conspiracy with Russia during the 2016 campaign.

To which Don Jr. replied:

Fact is, Handler's Netflix show wasn't canceled, she chose to leave it to pursue activism in protest of the current administration.

That didn't stop James Woods, who has been known to be an avid Trump booster, from adding kerosene to what was already kind of a dumpster fire.

And Don Jr., possibly taking a page from his father's book, agreed.

While Handler didn't honor the idiotic comments with a response, swathes of people jumped to her defense, including comedian Kathy Griffin and activist Dan Savage.

Some pointed out the hypocrisy.

@dememberj @kathygriffin @chelseahandler @DonaldJTrumpJr @POTUS @BarackObama We don’t even have to think about it b… https://t.co/FyzZtQ4fpZ
— andrea Kline (@andrea Kline) 1535543078.0

And other users weren't afraid to bring out the snark.

@RealJamesWoods Another example of your rapier wit. Years of acting, pouring through scripts, learning how to craft… https://t.co/gCuyvgoTGJ
— BadHombreTruth (@BadHombreTruth) 1535498984.0

Handler has been a favorite target of Republicans since the Trump era inspired the comedian to heighten her activism. Her characteristic irreverence has made her a formidable rival when it comes to sparring with words.

"Use your voice. Be vocal. Women fought for us for years, and years, and years, so that we would have the rights that we do. Not using your voice is an assault on them and what they did for us. The results of this election is a result of what happens when you don't show up and when you don't use your voice. If you're happy with the way things are, then great, but I can't imagine that anyone who's bringing a child into this world would be happy with this situation."

Woods's Twitter has become a hotbed of sentiments many find crude, unsettling, or just plain hateful.

This is sweet. Wait until this poor kid grows up, realizes what you've done, and stuffs both of you dismembered int… https://t.co/ayMXS4rPnL
— James Woods (@James Woods) 1499667865.0

And he's repeated many of Trump's most famous talking points, often from the alt-right Breitbart:

But as many are pointing out, he's becoming increasingly irrelevant.

While Woods has become increasingly unhinged on Twitter the past few years, Donald Trump Jr. has also done his fair share of "sucking" at politics. In addition to taking a meeting with Russians to affect the 2016 election and lying about it, in a now-deleted Instagram post, he shared a clearly fake poll of his father's approval rating.

Don Jr. and James Woods may think they have the last laugh, Handler is likely too busy making the world a better place to respond.