Is ISIS Behind the Sutherland Springs Church Shooting? 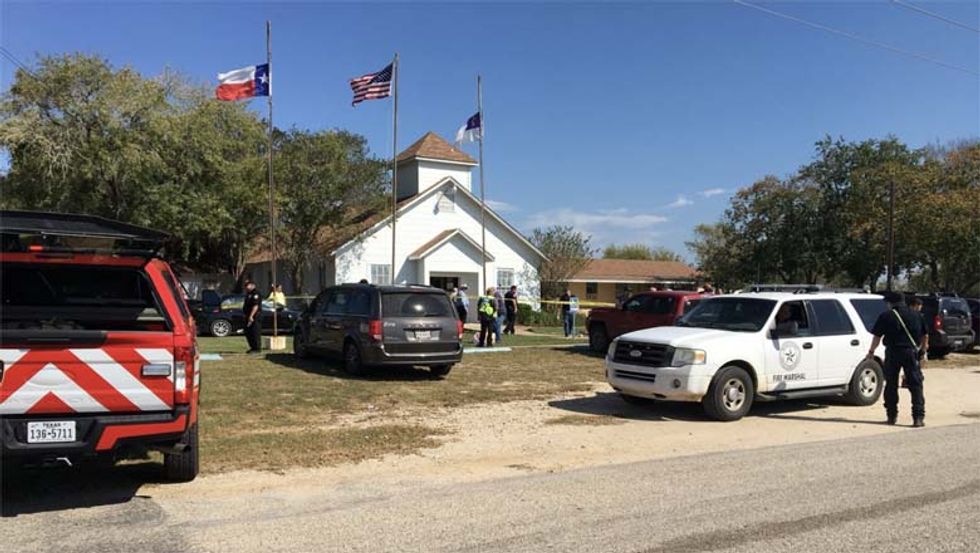 Telemundo reports that the shooter at the First Baptist Church in Sutherland Springs, Texas today was "from another country." Could it be the Islamic State? Probably not.

The shooter has since been named as Devin Patrick Kelley. Kelley was born in 1991 and is 26-years-old. According to CBS, Kelley is former “US Air Force E1 (2010-2014). He received a dishonorable discharge. He was court-martialed in May 2014.” He was court-martialed because of an assault on his wife and child. Because of his court-martial, "Both felony charges and domestic violence charges should legally prohibit someone from buying a gun," reports Business Insider.

The shooter was reported to have been "taken down," but details of his takedown were not yet released. He has been reported dead, reports CNN. Mark Seibel, National Security Editor for Buzzfeed, spoke to a neighbor of the church who said his house got hit by gunfire.

However, ISIS has been talking about the attack on terrorism channels. Terrorism Michael S. Smith II tweeted:

According to CNBC, the shooter walked into the First Baptist Church in Sutherland Springs and began shooting, killing at least 24 people and wounding much more. The attack began at around 11:30 a.m., reports Fox News. At that time, the shooter walked into the church and opened fire on its occupants. According to NBC News, First Baptist Church pastor Frank Pomeroy was out of town during the attack but that his daughter, 14, was inside the church. She has been reported killed. One of the victims has been named as a 6-year-old boy named Rylan, who was shot 4 times, reports CBS's David Begnaud.

Sutherland Springs is a small town of about 362 people east of San Antonio.

Donald Trump tweeted about the shooting from Asia, where he is currently on a 13-day tour that will take him through Japan, South Korea, China, Vietnam, and the Philippines. From Japan, Trump tweeted, "May God be w/ the people of Sutherland Springs, Texas. The FBI & law enforcement are on the scene. I am monitoring the situation from Japan."

Rep. Steve Scalise also weighed in on the mass shooting on Twitter, himself still recovering from being shot during the Congressional baseball shooting in June. Scalise said, "Devastating news from Texas today. Praying for the victims, the heroic first responders, and the whole Sutherland Springs community."

On Halloween afternoon, Sayfullo Saipov, an Uzbek immigrant who had been living in New Jersey with previous residences in Florida and Ohio, deliberately drove a rented Home Depot van down a bike path for a mile in the Tribeca area of Manhattan. After the attack, Saipov leaped out of the van with a BB or pellet gun and shouted, “Allahu akbar,” or, “God is great” in Arabic. According to NBC News, “Law enforcement sources said the man left a note in the truck claiming that he committed the attack for the Islamic State terrorist group.” The attack carried the hallmark of previous ISIS attacks throughout the United States and Europe.