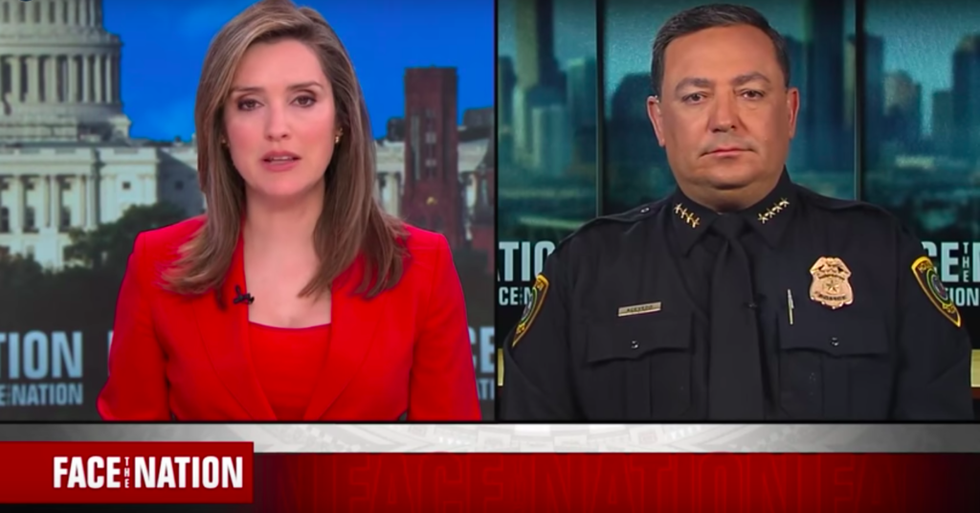 Houston Police Chief Art Acevedo slammed politicians for their inaction in response to mass shootings, telling Americans to vote out all elected officials who are only “offering prayers” following the  Santa Fe High School shooting. Acevedo's response comes after 10 people died in the latest mass shooting to take place at a school.

"People at the state level and federal level in too many places in our country are not doing anything other than offering prayers," he said. "I'm grateful that I'm working a city with the mayor who is transformative, Sylvester Turner, and what we're starting to see is that local governments are starting to make a difference, and I think that the American people, gun owners, the vast majority of which are pragmatic and actually support gun sense and gun reform in terms of keeping guns in the right hands."

He continued: "We need to start using the ballot box and ballot initiatives to take the matters out of the hands of people that are doing nothing that are elected into the hands of the people to see that the will of the people in this country is actually carried out."

"We've got to make sure that everyone stores [guns] in a responsible manner, and that there are significant penalti… https://t.co/YzOgGyCbU5
— Face The Nation (@Face The Nation) 1526835612.0

Strong and important words from Houston's Chief of Police, Art Acevedo. If only our elected officials, like… https://t.co/NfnE7Hrwos
— Goodbye Randy (@Goodbye Randy) 1526869753.0

Yesterday, Acevedo suggested that politicians enact stronger laws mandating proper security of guns in private homes. The gunman, 17-year-old Dimitrios Pagourtzis, used a shotgun and a .38-caliber revolver owned by his father. Both weapons were obtained legally, Texas Governor Greg Abbott noted, adding that he didn't know whether the father was aware his son had obtained the weapons.

"If you have firearms in your home and you do not secure them and you don't secure them in a manner that can preclude someone from grabbing them and taking them and carrying out this carnage, [there] is a criminal liability that attaches," Acevedo suggested.

"I believe that anyone that owns a firearm that doesn't secure it properly [and it] ends up in the wrong hands and used to kill innocent people, that that should carry some significant consequences. We need to think about that on the national level across this country," he added.

Governor Abbott, meanwhile, assured the citizens of Texas that his office is working to “ensure swift and meaningful action to protect our students.”

We have to look at the design of our schools moving forward and retrofitting schools that are already built... there are too many entrances and too many exits to our over 8,000 campuses in Texas.