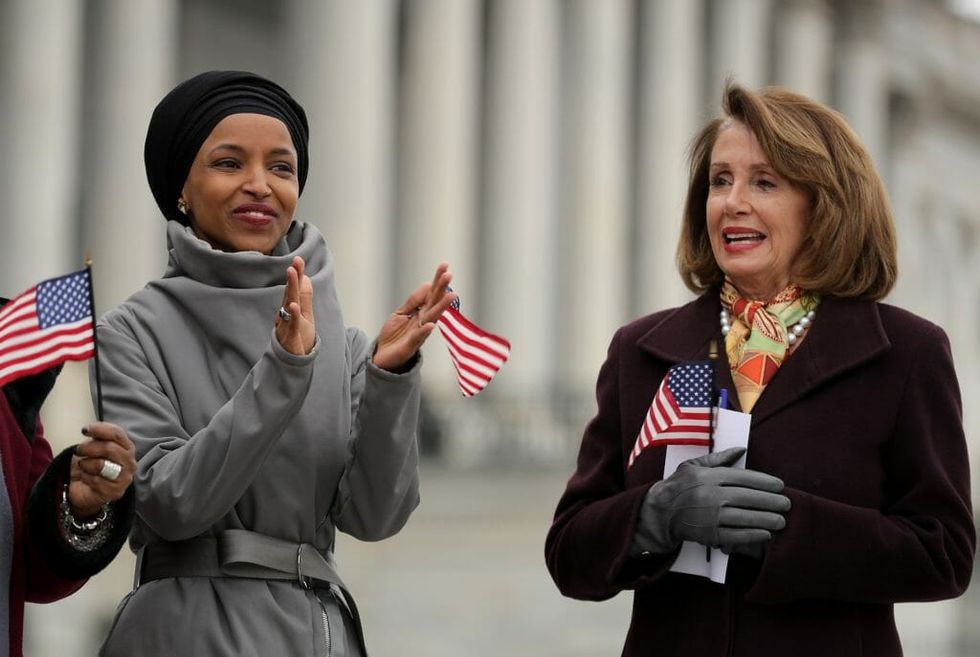 Rep. Ilhan Omar (D-MN) and Speaker of the House Nancy Pelosi (D-CA) rally with fellow Democrats on the East Steps of the U.S. Capitol before voting on H.R. 1, the For The People Act, March 08, 2019 in Washington, DC. (Photo by Chip Somodevilla/Getty Images)

At a Make America Great Again (MAGA) rally in North Carolina, President Donald Trump's White nationalist rhetoric was chanted by the crowd. The President initially said he discouraged the chant, but later defended the racist rhetoric as the act of patriots who really love the United States.

The crowd began a chorus of "send her back" in lieu of their usual Trump inspired "lock her up."

The object of the crowd's vitriol was Minnesota Democratic Representative Ilhan Omar, one of the two first Muslim women elected to Congress.

In response, Omar decided to "go back" to revisit her roots and path to the United States along with a colleague, Democratic Speaker of the House Nancy Pelosi. The Speaker and members of the Congressional Black Caucus visited Ghana to observe the 400th anniversary of the American slave trade.

They said “send her back” but Speaker @SpeakerPelosi didn’t just make arrangements to send me back, she went back w… https://t.co/Vk3stholAh
— Ilhan Omar (@Ilhan Omar) 1564686620.0

"So interesting to see 'Progressive' Democrat Congresswomen, who originally came from countries whose governments are a complete and total catastrophe, the worst, most corrupt and inept anywhere in the world (if they even have a functioning government at all), now loudly and viciously telling the people of the United States, the greatest and most powerful Nation on earth, how our government is to be run."

"Why don’t they go back and help fix the totally broken and crime infested places from which they came. Then come back and show us how it is done. These places need your help badly, you can’t leave fast enough."

Trump attempted to sow division between the freshman Democrats and the Speaker of the House.

"I’m sure that Nancy Pelosi would be very happy to quickly work out free travel arrangements!"

So how fitting for the two women to travel together, especially since many in media and the GOP kept trying to brand the women as enemies. This was not lost on people commenting on Omar's post.

Of course, not everyone was a fan. Or coherent in their objections.

Omar has been a favored target of the alt-right White nationalist movement.

She is also the subject of numerous false information campaigns by conservative activists and even the President online. However her constituents are who she represents.

Omar and Pelosi are part of a trip several members of the Congressional Black Caucus took to pay homage to the 400th anniversary of the American slave trade.

Tired of White supremacist rhetoric passed off as patriotism? This shirt is available here.