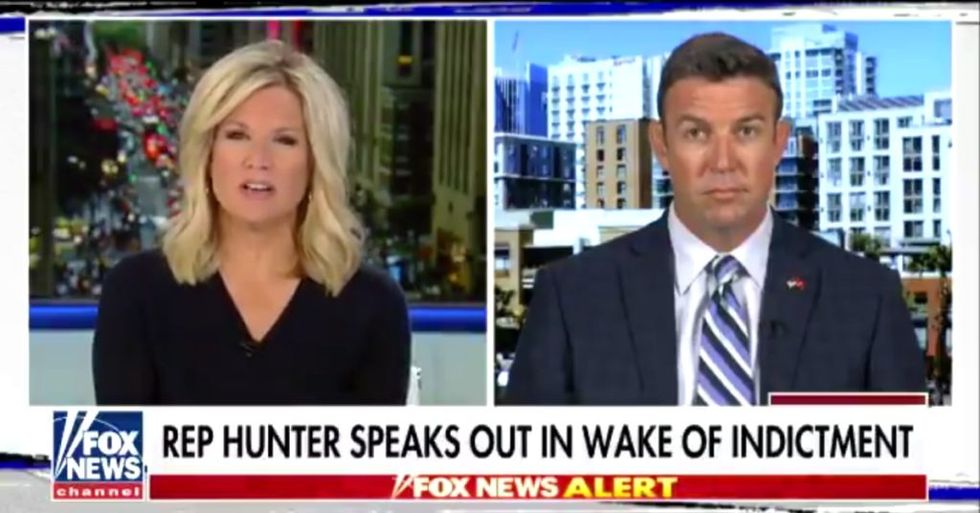 The couple painted a rosy picture on their social media accounts, often shown traveling together. But it's those trips at the heart of the allegations against the couple.

The indictment against Duncan Hunter and his wife charged them with illegally converting $250,000 in campaign funds for personal expenses and falsifying records to cover it up.

And that's where Hunter points the finger squarely at his wife, invoking his military service when he did.

"When I went away to Iraq in 2003, the first time, I gave her power of attorney. She handled my finances throughout my entire military career and that continued on when I got into Congress... She was also the campaign manager so whatever she did, that’ll be looked at too, I’m sure, but I didn’t do it."

Hunter maintains that although he knows his campaign broke the law, it was never him.

"My campaign did make mistakes. There was money spent on things, not by me but by the campaign, and I paid that back before my last election. I paid back $60,000 dollars after I did an objective audit. This is pure politics."

But when Campa-Najjar appeared on the Fox News program Your World with Neil Cavuto, he remained far more charitable to Hunter. The Democratic candidate stated his Republican rival was an honorable man who "lost his way" in Washington DC.

"I was just talking to my pastor about how I should confront this issue. And, first, I just want to say that Congressman Duncan Hunter honorably served our country abroad. He fought the battles that we wage abroad, so someone like me could have the luxury to fight the ones we have here at home."

"But I think that man who served our country never made it back from the battlefield. And I think Washington chewed him up and spat him out, and he lost his way."

However reactions on social media to Hunter's willingness to blame his wife received less friendly reponses as the following reactions show.

People expressed amazement at the tactic by Hunter based on his campaign's vow to fight for "values like hard work, family and patriotism."

Get this. Indicted GOP Rep Duncan Hunter is blaming his wife for everything. He said his wife handles his finances… https://t.co/b1zheEAVnq
— Scott Dworkin (@Scott Dworkin) 1535120584.0

Whatever my wife is irked about this weekend, I'm just going to point out I haven't blamed her for any federal crim… https://t.co/dOPeYEGgpg
— IWantNothingHat (@IWantNothingHat) 1535120037.0

Retiring Republican Speaker of the House Paul Ryan of Wisconsin called the charges "deeply serious" and said Hunter would be removed from his three House committee assignments. Duncan Hunter agreed to comply with Ryan's request to avoid open debate on all the charges facing him and a vote on the House floor.