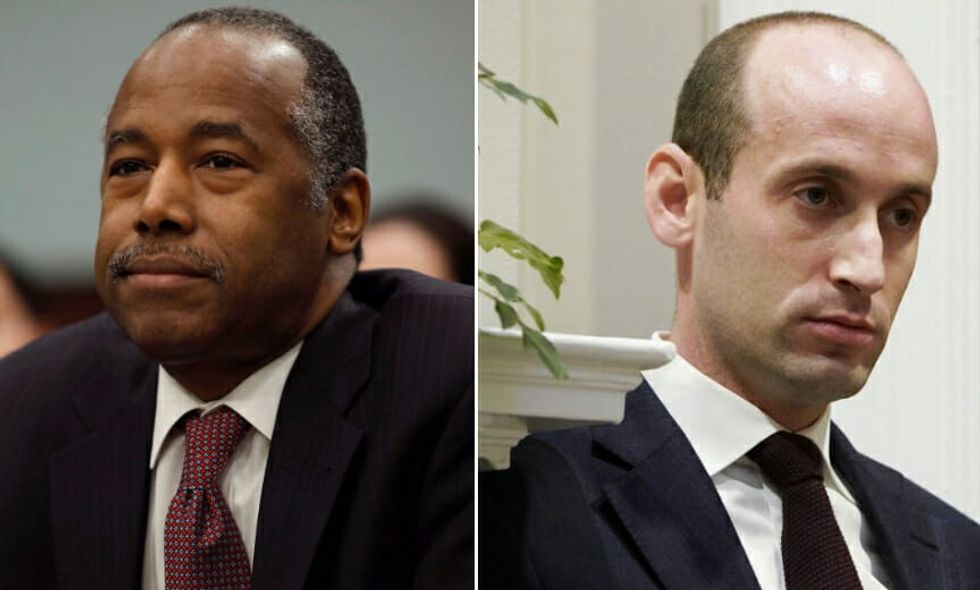 Miller's latest effort—published in the Federal Register—changes regulations regarding undocumented immigrants in federally subsidized housing, even though other family members are documented legal residents or United States citizens.

According to HUD Secretary Carson, Miller's new rule would:

“make certain our scarce public resources help those who are legally entitled to it.”

But HUD admitted their plan would leave more than 55,000 children—all legal U.S. residents or citizens—homeless.

THREAD: We have just released a new statement from @GreensteinCBPP on the Trump Administration’s #housing proposal:… https://t.co/g0QxdYCSPM
— Center on Budget (@Center on Budget) 1557505093.0

Some background: Individuals who are not U.S. citizens or immigrants with certain immigration statuses are already… https://t.co/48KFZn9vBy
— Center on Budget (@Center on Budget) 1557505093.0

All of the individuals newly barred from receiving housing assistance would be U.S. citizens & eligible immigrants,… https://t.co/Rzet0lfV3n
— Center on Budget (@Center on Budget) 1557505094.0

These proposed changes would appear to carry out part of the Trump Administration’s agenda of sharply altering our… https://t.co/LyTUKn3Xsw
— Center on Budget (@Center on Budget) 1557505094.0

Threatening people who want to build better lives for themselves & their families is contrary to the national inter… https://t.co/rsribHVRSV
— Center on Budget (@Center on Budget) 1557505094.0

HUD’s own impact analysis of the rule concluded half of those targeted are children who are legally qualified for aid, belying Carson's claim of the purpose of the new rule.

Current HUD housing rules bar undocumented immigrants from receiving any federal housing subsidies. But they do allow families of mixed-immigration status to live in housing as long as one person in the household is financially and legally eligible.

Subsidies for the housing are adjusted to cover only the eligible household members and the family is responsible for paying any rent or utilities not covered due to  the adjustments.

So while undocumented immigrants may have a roof over their head, they pay for it. And only the legal United States citizens or residents in the home receive any financial subsidies from HUD.

But Miller, Carson and the Trump administration propose making the entire family homeless if a single member is undocumented—even if the undocumented member fell under Delayed Action for Childhood Arrivals (DACA) rules.

Or the family can split up with the undocumented member(s) forced to live elsewhere lest the entire family face eviction. However for over 55,000 children, this option is not possible as the undocumented are the only adults in the household.

Despite an internal HUD impact analysis pointing out the issue, no clear plans for what to do with over 55,000 homeless children who are legal United States residents or citizens were stated by Carson or the Trump administration.

According to the HUD report:

"HUD expects that fear of the family being separated would lead to prompt evacuation by most mixed households. Temporary homelessness could arise for a household, if they are unable to find alternative housing."

Needless to say, this latest Stephen Miller proposal is causing a stir.

And some feel this is just the beginning of dismantling another social safety net by the Trump administration for the benefit of the wealthy.

Approximately 25,000 households of about 108,000 people living in subsidized housing have at least one undocumented member.

Among these households, 70 percent, or 76,000 people, are legally eligible for benefits with the majority living in California, Texas and New York.

How those states will cope with tens of thousands of homeless children—citizens or legal US residents entitled to benefits—is unknown. But they are unlikely to receive ai from the Trump administration.