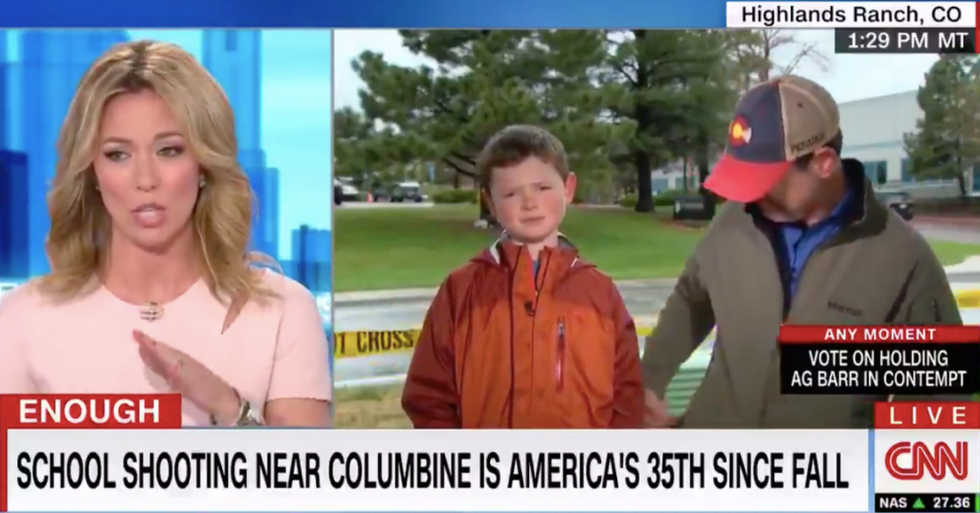 Nate Holley, a Colorado sixth-grader at STEM School Highlands Ranch, spoke to CNN about his experience inside the school after a gunman opened fire on his classmates and faculty, killing one student and injuring eight others.

"It was really chaotic," he said, recalling the moment he froze when gunshots shattered a window. "Most of the kids didn't know what to do."

Holley nearly brought CNN news anchor Brooke Baldwin when he said he was preparing to go down "fighting" the shooter with a metal baseball bat.

Baldwin spoke to Holley after the interview wrapped and shared that he told her “Someone who survives this is a WARRIOR.”

A segment of Baldwin's show incorporated news footage from the scenes of previous school shootings and noted that the Highlands Ranch shooting, which took place just “seven miles from Columbine High School." There have been 35 school shootings since fall 2018.

➞35 school shootings since the school year began, it's not over yet. ➞Another child is dead in America in their own… https://t.co/xfTGks0HOA
— Amee Vanderpool (@Amee Vanderpool) 1557354408.0

Holley's interview disturbed observers who have called for the United States to adopt comprehensive gun reform.

"I was hiding in the corner and they were right outside the door. I had my hand on the metal baseball bat just in c… https://t.co/MtQi7fae7C
— Matthew Touchette (@Matthew Touchette) 1557356038.0

The shooting comes one week after a man shot six people, killing two, on the last day of spring classes at the University of North Carolina at Charlotte.

"Ever since Columbine and Sandy Hook, school shootings have become regular occurrences in the news," she continued. "Society is becoming numb to children being slaughtered. Victims and survivors aren't just numbers. They are human beings... I'm afraid that one day I'll go to school and I'll never come out."

Milan asked what we are going to do to combat gun violence so no student has to fear a school shooting happening in… https://t.co/AFGWqGWEmI
— Beto O'Rourke (@Beto O'Rourke) 1557157615.0

According to a study conducted by researchers at Brigham and Women's Hospital (BWH) that analyzed around 200 active shooting incidents in America, active shooters who use semi-automatic rifles will double their chances of wounding and killing victims, in comparison to another type of gun.