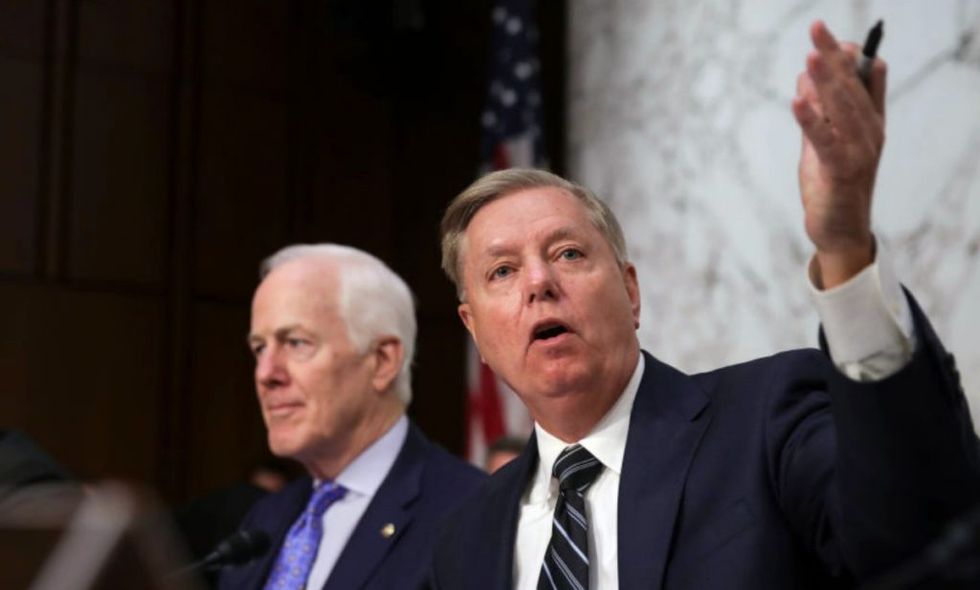 In an attempt to defend the nominee his party endorsed so stridently, a member of the Senate Judiciary Committee took to Twitter Wednesday for the standard defense ploy of victim blaming and slut shaming. Republican Senator Lindsey Graham of South Carolina posted a series of four tweets in response to Swetnick's sworn statement.

I have a difficult time believing any person would continue to go to – according to the affidavit – ten parties ove… https://t.co/AafhrFs1em
— Lindsey Graham (@Lindsey Graham) 1537981937.0

Graham then made a similar statement on camera.

Lindsey Graham on third Kavanaugh accuser: "If you went to a party once where people are being drugged and gang-rap… https://t.co/ne0kmyhRSN
— The Hill (@The Hill) 1537990440.0

Swetnick's description includes victims being drugged and raped by multiple young men who included Kavanaugh and Judge. In her sworn statement, Swetnick said:

"I witnessed Brett Kavanaugh consistently engage in excessive drinking and inappropriate contact of a sexual nature with women during the early 1980s."

Swetnick stated at one of these parties, she became the victim.

While Graham's comments may play well to certain people, they likely will not sway anyone already opposed to Kavanaugh. And in the wake of the Me Too movement—spurred by powerful sexual predators in Hollywood finally facing consequences, including prison, for years of abuses—public tolerance for citing the victim's behavior or appearance as an excuse for the predator is on the decline.

@LindseyGrahamSC Remember who wrote these words? Let me give you as hint: his name rhymes with Lindsey Graham. https://t.co/t8XgHfkX3w
— Fabian Nicieza (@Fabian Nicieza) 1537986898.0

@LindseyGrahamSC #1, why would people be suspicious when Avenatti was right about the whole Trump/Cohen/Daniels deb… https://t.co/UMzaGqnBEO
— Steph Flaherty (@Steph Flaherty) 1537990465.0

Kavanaugh entered the running for Justice Anthony Kennedy's vacant Supreme Court seat with the full blessing and endorsement of the Republican Party. Since then, GOP leaders' actions raised questions about the proceedings.

Now—with three women accusing Kavanaugh of sexual assault and the spectre of more looming—the President and GOP try to do damage control with a public that opposes their nominee at a rate higher than any other candidate since 1987. 50 percent of voters oppose Kavanaugh attaining a lifetime appointment to the SCOTUS bench according to a recent Fox News poll.

Avenatti responded Wednesday to Graham's tweets asking why the GOP and White House do not order a complete background check by the FBI like the one done on Justice Clarence Thomas.

@LindseyGrahamSC So then let’s have an FBI investigation into ALL of the allegations. And let’s present All of the… https://t.co/zywIHAtTY7
— Michael Avenatti (@Michael Avenatti) 1537983028.0

Many others echoed Avenatti's request for an FBI investigation in their responses to Senator Graham.

@LindseyGrahamSC I'm highly suspicious on why you an your GOP senators are refusing to have a FBI investigation?
— Ernesto Guerra (@Ernesto Guerra) 1537982020.0

@LindseyGrahamSC I find it disgusting that you would not take this claim serious. The GOP are going to find their… https://t.co/awh0NhT5Pa
— Cheryl Thomas (@Cheryl Thomas) 1537990148.0

@LindseyGrahamSC Nah. Even if there was credible defense to Kavanaugh, your name calling makes it very easy to list… https://t.co/PXbo5Scax7
— Geoff Kim (@Geoff Kim) 1537989556.0

Senator Graham has yet to respond to Avenatti or any of his other critics regarding his tweets.