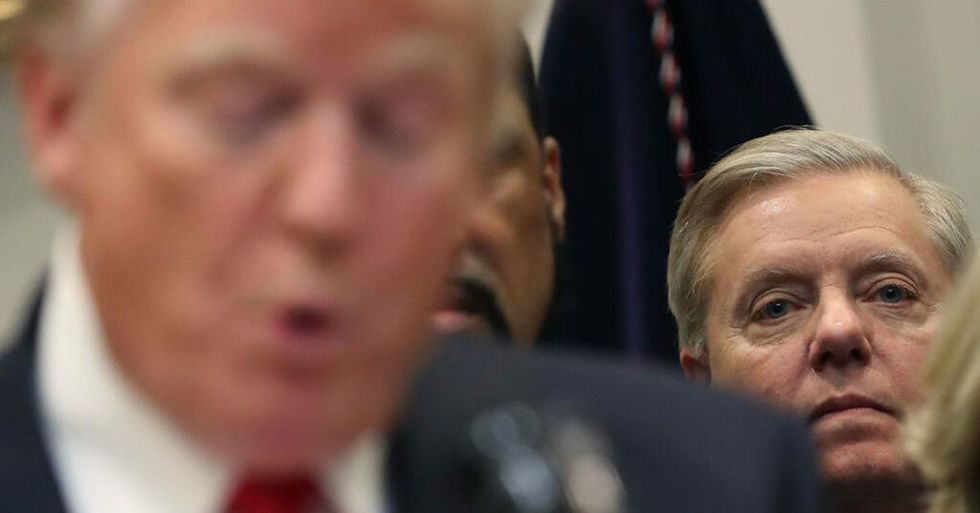 President Donald Trump makes an announcement in the Roosevelt Room at the White House on November 14, 2018 in Washington, DC. (Photo by Mark Wilson/Getty Images)

It all started with coverage of an appearance by Republican Senator Lindsey Graham on Fox News denigrating the four Congresswomen President Donald Trump recently targeted with racist tweets. From there, physician and former Vermont Governor and DNC Chair Howard Dean asked what happened to the South Carolina GOP Senator who was once a vocal Trump critic but is now one of his most vocal cheerleaders.

"He may be showing what we call 'identification [with] the aggressor' in which prior opponent incorporates negative traits of abuser into oneself including loss of moral compass."

Then frequent Trump critic George Conway filled in another blank by stating:

"It started when Trump gave Graham’s cell number away."

Follow the progression from demonstrated behavior to potential diagnosis here.

On Fox right now, Sen Lindsay Graham describes @aoc and others as "a bunch of communists. They hate Israel. They ha… https://t.co/eWxLwKocFN
— Jim Sciutto (@Jim Sciutto) 1563194726.0

WHAT HAPPENED TO @LindseyGrahamSC? He may be showing what we call “identification w the aggressor” in which prior… https://t.co/W4d1bf9ZfQ
— NeuroPsychoPhD (@NeuroPsychoPhD) 1563363693.0

Even those closely associated with Graham, like Megan McCain, showed alarm and disbelief in his Trump turnaround. Many speculated the Trump administration—or others—might have leverage on Graham.

But some respondents offered another observation.

They stated Graham gravitates toward and imitates men he perceives as strong.

@gtconway3d It started when his mother’s egg was fertilized by his father’s sperm. @LindseyGrahamSC is a weak man w… https://t.co/eQZvO2obHn
— Jim Dicker (@Jim Dicker) 1563365700.0

@gtconway3d Graham submitted to Trump’s dominance display? I think there’s an argument to be made that submissivene… https://t.co/ILQSF2AyiR
— Jack Stallings (@Jack Stallings) 1563364421.0

Whatever is the basis of the shift in Graham and other prominent onetime Trump critics in the GOP, the results are a free pass for the President in the Republican controlled Senate. The 2020 election is 474 days away. 22 GOP Senate seats will be up for reelection.

The book Witness to Treason: How the GOP, Trump, & Greed Betrayed America, available here, details how "espionage, blackmail, sex, greed, murder, spies, treason, and betrayal are all actors in this recounting of the front-page events from December 2015 through the summer of 2018."

The book Democracy in Chains: The Deep History of the Radical Right's Stealth Plan for America, available here, says "behind today’s headlines of billionaires taking over our government is a secretive political establishment with long, deep, and troubling roots. The capitalist radical right has been working not simply to change who rules, but to fundamentally alter the rules of democratic governance. But billionaires did not launch this movement; a white intellectual in the embattled Jim Crow South did."