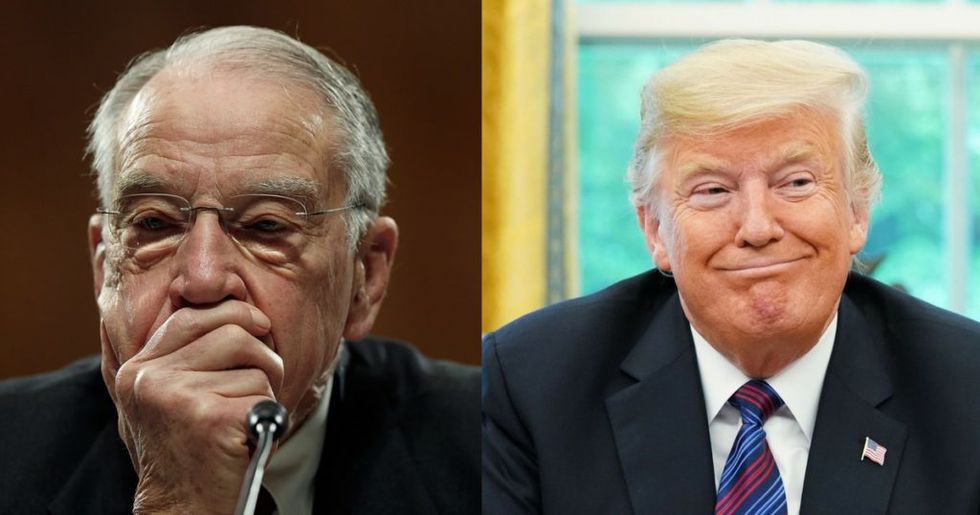 "White House Counsel Don McGahn will be leaving his position in the fall, shortly after the confirmation (hopefully) of Judge Brett Kavanaugh to the United States Supreme Court," Trump wrote. "I have worked with Don for a long time and truly appreciate his service!"

According to Rosalind Helderman of the Washington Post, McGahn was "surprised, though attitude was 'of course it happened this way.'"

McGahn did not know about Trump's tweet before it was sent and had not previously discussed his departure plans wit… https://t.co/fJIrHYMqyu
— Rosalind Helderman (@Rosalind Helderman) 1535556367.0

McGahn's departure comes days after it was revealed that he spent more than 30 hours providing testimony and documents to Special Counsel Robert Mueller and his investigation into Trump-Russia collusion and the president's alleged attempts to obstruct justice.

The president's announcement was met with shock and bewilderment inside Washington political circles.

Particularly from Senate Judiciary Committee Chairman Chuck Grassley (R-IA) who responded on Twitter in such an earnest pure way:

Grassley's office followed up his tweet with a statement about McGahn.

Senator Grassley has admired Mr. McGahn's work over the last two years and has considered him integral to the President's record-breaking success on filling judicial vacancies. From Senator Grassley's perspective, there's not been any White House Counsel who has worked so well and so efficiently with the chairman's office and the Senate Judiciary Committee on judges.

Grassley's tweet was met with immediate mockery. Social media blasted the Iowa Republican for never having the stones to check Trump.

@ChuckGrassley @realDonaldTrump Maybe it’s time for a co-equal branch to step up and do the work of oversight. If… https://t.co/REAFdXo1IG
— Still Not Over It (@Still Not Over It) 1535555285.0

Others think Grassley is "panicking" because he knows McGahn has dirt on Trump - and likely others in Republican politics. Also, big points for the S.A.T. word, "quisling." Nice.

@ChuckGrassley @realDonaldTrump Seems like you're a bit worried about what McGahn will tell Mueller. Why's that Chu… https://t.co/UwmcDWIIFl
— Justice is Coming (@Justice is Coming) 1535556528.0

On Monday, reports indicated that Trump was at odds with McGahn over the prospect of pardoning Paul Manafort, Trump's former campaign chair who was convicted of eight felonies earlier this month. McGahn, it was said, staunchly opposed the idea.

@ChuckGrassley @realDonaldTrump @ChuckGrassley we all know this is part of trump's plan to pardon Paul Manafort who… https://t.co/zFh92AIepz
— jamiesrice (@jamiesrice) 1535555726.0

@ChuckGrassley @realDonaldTrump He likely fired him because he spoke with Mueller for 30+ hours and won't legitimat… https://t.co/yLscgssn0v
— Leanne O (@Leanne O) 1535560135.0

Brett Kavanaugh, Trump's pick to replace Justice Anthony Kennedy on the Supreme Court, is set to begin his confirmation hearings before the U.S. Senate on September 4th, but Democrats are pushing to delay those hearings, in part because of a lack of transparency when it comes to Kavanaugh's records from when he worked in the White House.

And Grassley, as Chairman of Judiciary, has been key to that lack of transparency. People called Grassley out for this as well.

@ChuckGrassley @susandtom @realDonaldTrump You can't allow Kavanaugh to be considered without releasing all of his documents!
— IamPattie (@IamPattie) 1535557613.0

@ChuckGrassley @realDonaldTrump Why not hold off on that nominee, you know the one we only have 6% documentation fo… https://t.co/2O6OIb8zny
— Lisa Moraitis🇬🇷🇺🇸 (@Lisa Moraitis🇬🇷🇺🇸) 1535567287.0

Proceeding without all the documents? "U can't let that happen."

@ChuckGrassley @bulldoghill @realDonaldTrump I don't think he's listening to you, Senator....I know how you can get… https://t.co/fDfEDPHtqX
— Rose von Perbandt (@Rose von Perbandt) 1535557827.0

Grassley could vote 'no' on Kavanaugh but we know that's not going to happen.

@ChuckGrassley @realDonaldTrump Why don’t you due your job and stop Kavanaugh nomination until after the Election?
— Grandma Roxy (@Grandma Roxy) 1535557655.0

Trump is rumored to be considering replacing McGahn with Emmet Flood, a lawyer who counseled President Bill Clinton during his impeachment hearings in the 1990's.

The president "does have an excellent relationship with Emmet Flood," Trump's TV lawyer Rudy Giuliani told Time Magazine on Wednesday. "From the very beginning they sort of hit it off."