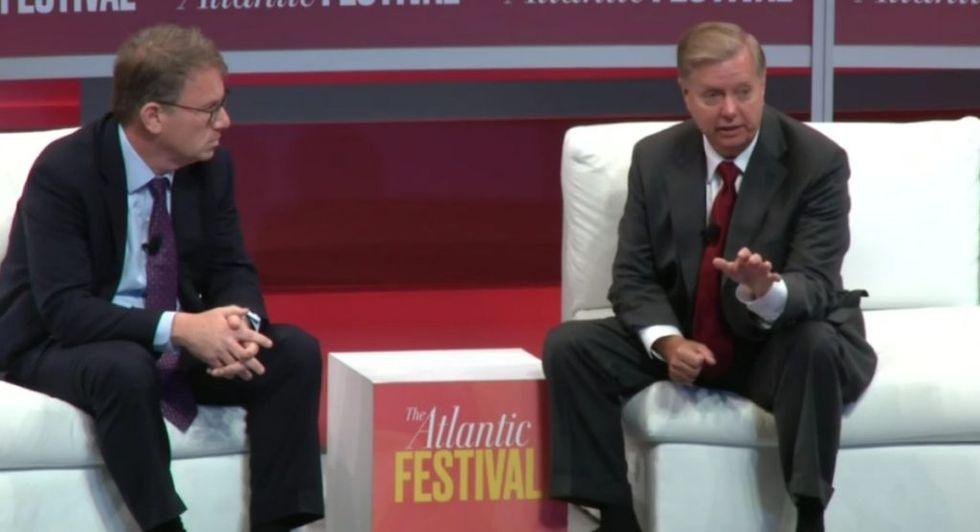 Republican Senator Lindsey Graham of South Carolina spoke with The Atlantic editor-in-chief, Jeffrey Goldberg, during The Atlantic Festival in Washington DC on Wednesday. Graham's remarks drew boos from the crowd and confusion from Goldberg.

At one point The Atlantic editor stated, "I don't even know what that means."

In his defense of Trump, Graham repeatedly brought up Bill Clinton and events from 1998—without explanation—which confused the crowd. His first statement was to paraphrase a James Carville comment from 1998.

However, without any explanation, the crowd assumed he was speaking of Dr. Ford. Goldberg informed the crowd Graham had misquoted Carville. Graham continued to deflect to 1998 and Clinton, rather than address Trump in 2018.

Finally, Goldberg asked if he meant Trump could have said worse so people should be grateful. Forcing Graham to address the present, the Senator claimed he did not like the President's mocking of Ford, but then tried to excuse the behavior by stating the President acted out of frustration over the treatment of his SCOTUS nominee.

In addition to deflecting the conversation to events from 20 years ago and making excuses for Trump's behavior, Graham also drew boos when he stated everything the President said about Ford was factual. Graham's behavior onstage earned him no fans, except maybe the one person he may have been playing to: President Trump. Throughout the confirmation process, people accused Graham of auditioning for the Attorney General position in the Trump administration.

It turns out Lindsey is a titanic fraud. A fraud of Pence-ian dimensions. A small man lacking integrity and princip… https://t.co/cEiutnoSFL
— Steve Schmidt (@Steve Schmidt) 1538543862.0

His ludicrous affectation and faux outrage at the hearings was a moment of beclownment that knows no equal. He is a… https://t.co/GYnLUv24wr
— Steve Schmidt (@Steve Schmidt) 1538543863.0

I think Lindsey Graham's outbursts today are about interviewing for the job of Trump's next attorney general.
— Dan Rather (@Dan Rather) 1538084055.0

@NBCNews Hey @LindseyGrahamSC. Did @realDonaldTrump offer you AG for after he fires Sessions or something?
— Scott Young (@Scott Young) 1538581304.0

Others took exception to Graham's remarks at The Atlantic Festival.

Other Republicans denounced Trump's attacks against Ford, while Graham couched his in references to Clinton and excuses for the President.

@NBCNews Once again the #GoodOleBoy #republican are unable to even be respectful to women when tossed a softball opportunity.
— Marcus Allyn (@Marcus Allyn) 1538581222.0

The date for the full Senate vote on Kavanaugh's confirmation to a lifetime appointment to the Supreme Court has not yet been set.