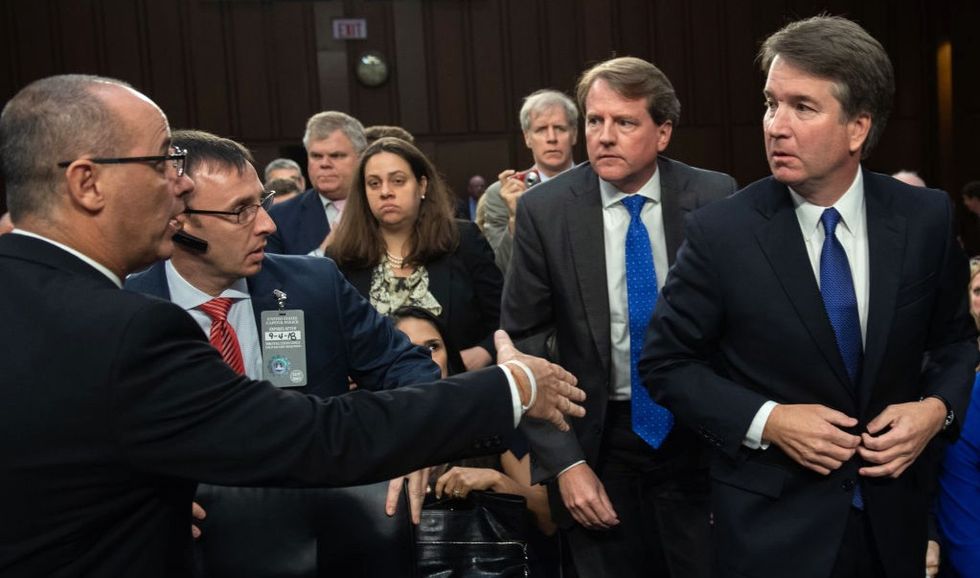 Fred Guttenberg (left), father of Parkland, Florida, shooting victim Jaime Guttenberg, introduces himself and tries to shake hands with Judge Brett Kavanaugh during his US Senate Judiciary Committee confirmation hearing to be an Associate Justice on the US Supreme Court, on Capitol Hill in Washington, DC, September 4, 2018. (Photo by SAUL LOEB/AFP/Getty Images)

Without a response, SCOTUS nominee Kavanaugh refuses the handshake, turns his back on Guttenberg and walks away.

News of Kavanaugh's deliberate snub of Guttenberg—despite hearing who he was and why he was there—spread on social media, complete with video footage capturing Kavanaugh's reaction.

Just walked up to Judge Kavanaugh as morning session ended. Put out my hand to introduce myself as Jaime Guttenber… https://t.co/OhU9rlYRec
— Fred Guttenberg (@Fred Guttenberg) 1536080589.0

But shared trauma can form a strong bond and Kavanaugh's snub hurt more than just Fred Guttenberg and the memory of his daughter Jaime. Other students who survived the mass shooting at the Parkland, Florida, high school quickly shared their outrage over the treatment of the father of their friend and classmate.

The mass shooter entered the freshman wing of the school. Lauren Hogg—also 14 and a freshman at the time of the shooting—lost four friends to gun violence on Valentine's Day, 2018. Jaime Guttenberg was among them.

Since their murders, Hogg joined other Parkland survivors to advocate sensible gun control. She took to Twitter to express her feelings about the Kavanaugh snub of Guttenberg.

Wow literal proof that our politicians could care less about protecting this nations citizens from gun violence. B… https://t.co/QARv73ljr7
— Lauren Hogg (@Lauren Hogg) 1536087803.0

This photo is an exact representation of how politicians treat gun violence in this country. They know it exists… https://t.co/3JYGxo1tiM
— Lauren Hogg (@Lauren Hogg) 1536089307.0

Emma Gonzalez, a senior at Marjory Stoneman Douglas when the shooting occurred also took to Twitter to defend Guttenberg. And comment on Brett Kavanaugh's manners.

Fred Guttenberg is one of the most wonderful people I know. Mr. Kavanaugh, 4 year olds have better manners than yo… https://t.co/aG8bYGbX1y
— Emma González (@Emma González) 1536093817.0

Other alumni, like Matt Deitsch, and survivors, like Jaclyn Corin and David Hogg shared their feelings on social media as well...

...and suggested people call their Senators to speak out about Kavanaugh's snub. Several people also noted the National Rifle Association's (NRA) vow to get Kavanaugh approved.

Other activists joined the Parkland survivors in solidarity.

Like Igor Volsky, Executive Director at Guns Down America...

...and activist and actress, Alyssa Milano.

Here is the video of Kavanaugh choosing to not shake hands with @fred_guttenberg. Disgraceful. #STOPKavanaugh https://t.co/Pp2uqATka9
— Alyssa Milano (@Alyssa Milano) 1536089725.0

Others offered support for Guttenberg and disgust at Kavanaugh's actions.

After stories circulated that Guttenberg crashed the hearing and the White House offered an alternate version of events...

...Guttenberg clarified that he was an invited guest at the hearing.

To be clear, I was invited by Senator Feinstein to attend today. Anyone who knows me knows I will talk to anyone.… https://t.co/Rqfu5PJ8CH
— Fred Guttenberg (@Fred Guttenberg) 1536100501.0