People were not having it. 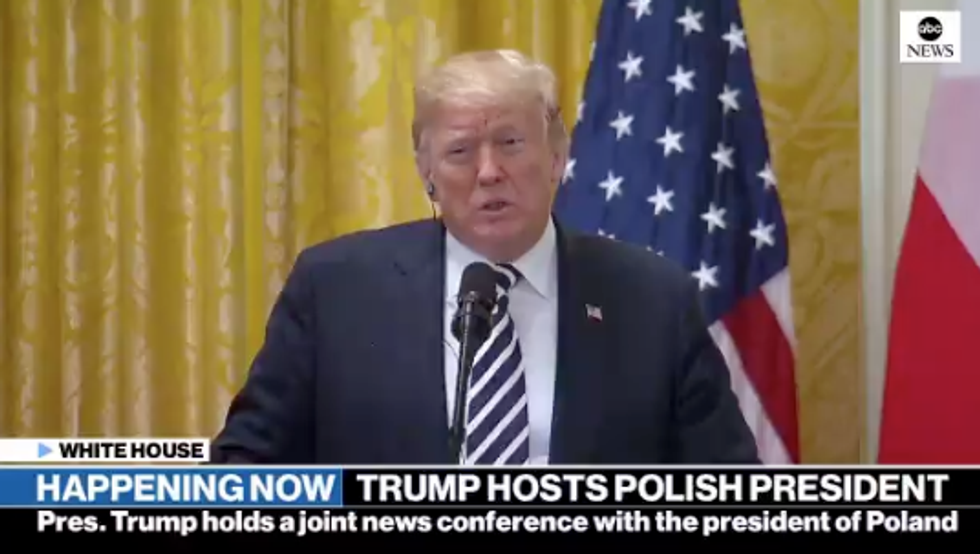 President Donald Trump expressed empathy for Brett Kavanaugh on Tuesday when asked how he felt about the FBI reopening their background investigation into the Supreme Court nominee, following allegations that Kavanaugh attempted to rape a young woman while he was in high school.

Trump, infamous for his lack of empathy, seems to have a soft spot for Kavanaugh.

"I feel so badly for him that he's going through this," Trump said. "This is not a man that deserves this."

Trump lamented that the allegations "should have been brought up long ago."

The president added: "That's what hearings are for, you don't wait until the hearing is over and then all of a sudden bring it up."

It wasn't "brought up" at Kavanaugh's hearings because Christine Blasey Ford, his accuser, requested confidentiality when she brought the matter to the attention of her elected representatives.

Trump said it "wouldn't bother" him if the FBI followed up on the accusations but reinforced his belief that "the FBI...they really don't do that. That's not what they do." Trump then countered himself, adding that the FBI has already conducted six background checks into Kavanaugh for his previous judicial appointments.

It's what the FBI does.

@ABC #tinymushroom @realDonaldTrump the #fbi will do as many background checks as you ask them. It’s literally what they do.
— John Galt (@John Galt) 1537298770.0

Social media went into a fury against the president. People want to know why Kavanaugh's accuser doesn't deserve the same benefit of the doubt or empathy as Kavanaugh.

@ABC No woman deserves this either, yet @realDonaldTrump let's it loose every so often. #TrumpToad https://t.co/x4F2eWTili
— Abner Benjamin (@Abner Benjamin) 1537298507.0

Trump says — repeatedly—that he “feels terribly” for Kavanaugh but summons no empathy for Ford, whom he refers to as “the woman.”
— Alex Wagner (@Alex Wagner) 1537297578.0

Trump's own history of sexual misconduct allegations wasn't forgotten either, so his empathy toward Kavanaugh wasn't surprising to some.

@ABC The Grifter in the Oval Office is a predator who has, time and again, demonstrated predatory behavior. Of cour… https://t.co/gD6JiNJXYX
— JK Weston (@JK Weston) 1537298390.0

Trump's hypocrisy on criminal justice is on full display here.

Trump just established the standard of proof for Kavanaugh: “There shouldn’t be a doubt.” So senators should vote… https://t.co/ayLrwwpfuE
— Lawrence O'Donnell (@Lawrence O'Donnell) 1537297547.0

Trump also accused Democrats of obstructing Kavanaugh's confirmation - and Twitter showed up to remind him of what happened in 2016.

Republicans in the Senate refused to hold hearings on President Barack Obama's nominee, Merrick Garland, using the 2016 election as an excuse to steal a Supreme Court seat.

@keithboykin Just like republicans did for President Obama's pick for SCOTUS? How soon do we forget. SMFH
— Renna' Wilkinson (@Renna' Wilkinson) 1537300532.0

@keithboykin Many Republicans have selective amnesia about their former statements/actions when it comes time to ad… https://t.co/tlFHLjkHRr
— @Conga1 (@@Conga1) 1537298923.0

Right-wing media has mounted a character assassination campaign against Ford, and their followers are gobbling it up.

On the advice of a lawyer, who believed she would be attacked as a liar, Christine Blasey Ford took a polygraph tes… https://t.co/XZGtbjGPl1
— Emanuella Grinberg (@Emanuella Grinberg) 1537125638.0

Credibility is not on the president's side.