We feel your pain. 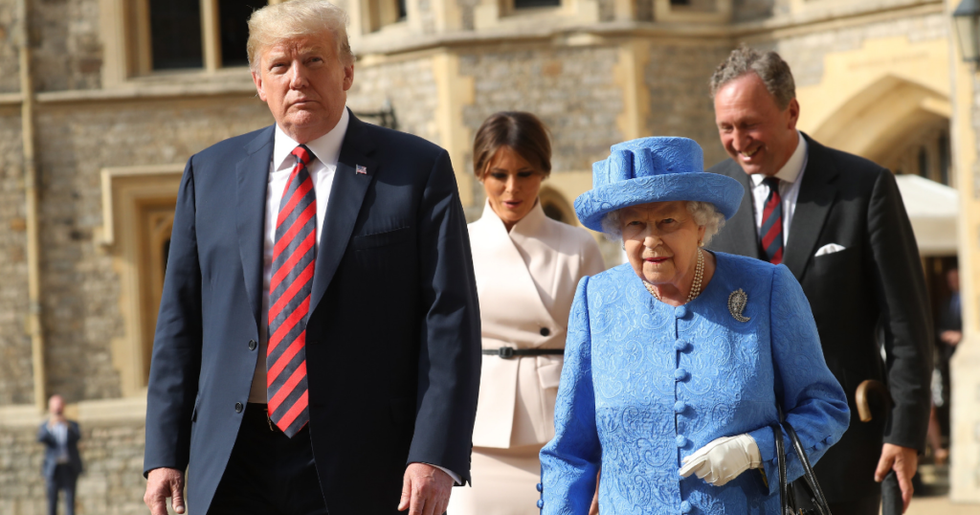 WINDSOR, ENGLAND - JULY 13: Queen Elizabeth II, President of the United States, Donald Trump and First Lady, Melania Trump walk from the Quadrangle after inspecting an honour guard at Windsor Castle on July 13, 2018 in Windsor, England. Her Majesty welcomed the President and Mrs Trump at the dais in the Quadrangle of the Castle. A Guard of Honour, formed of the Coldstream Guards, gave a Royal Salute and the US National Anthem was played. The Queen and the President inspected the Guard of Honour before watching the military march past. The President and First Lady then joined Her Majesty for tea at the Castle. (Photo by Chris Jackson/Getty Images)

The White House announced on Tuesday that President Donald Trump will travel to the United Kingdom in June for the commemoration of the 75th anniversary of D-Day, the Allied invasion of France that helped lead to victory over Nazi Germany during World War II.

But Trump's planned presence in Portsmouth has some British officials worried that he will detract from the solemn event, given his thirst for attention and the kerfuffles his security needs will likely cause.

"The D Day 75 commemoration we have planned was with the veterans meeting the Queen, probably for the last time," Gerald Vernon-Jackson of the Portsmouth City Council tweeted. "Now with Donald Trump coming this will become a day of controversy not commemoration, and an event open to everyone in Portsmouth will now have huge security barriers."

Many residents of Portsmouth are asking the same question: why is Trump coming?

@geraldvjuk As a Portsmouth resident, I stand against the visit of President Trump as I feel it will detract from a… https://t.co/WYVHwVPNE8
— 🇪🇺Sue (@🇪🇺Sue) 1556046834.0

@geraldvjuk Look at this, he's not only RUINING things for AMERICANS, he's taking his POISONOUS presence to the UK.… https://t.co/ZmgutYeuMN
— Chris Brown (@Chris Brown) 1556049513.0

Vernon-Jackson's concerns were not shared by everyone, though. Some people think the American president should be included, even Trump.

@geraldvjuk Portsmouth on all the news channels cos the president is coming and you want to block this ? Can’t you… https://t.co/LKrRN4ZTww
— pompey isa (@pompey isa) 1556036267.0

But Vernon-Jackson is standing his ground.

Others could not help but joke about Trump and barriers.

Vernon-Jackson and his constituents are not alone in their frustration.

Shadow Foreign Secretary Emily Thornberry, part of the opposition movement to Prime Minister Theresa May's Brexit push, was dumbfounded at the invitation, in large part due to the Trump administration threatening to veto a United Nations resolution aimed at combating sexual violence in conflict zones.

"It beggars belief that on the very same day Donald Trump is threatening to veto a United Nations resolution against the use of rape as a weapon of war, Theresa May is pressing ahead with her plans to honor him with a state visit to the UK," Thornberry said.

A watered-down version of the measure was passed Tuesday afternoon after the United States complained that the original document was too friendly toward abortion.

After the ceremonies in Portsmouth, Trump will travel to France on June 6, the anniversary of the invasion.