Amelia Mavis Christnot
Jul. 22, 2019
President Donald Trump walks out of the White House before departing July 19, 2019 in Washington, DC, traveling to New Jersey to spend the weekend at his Trump National Golf Club in Bedminster. (Photo by Chip Somodevilla/Getty Images)

Prompted by a presidential tweet about the death of retired Supreme Court Justice Stevens, Conway posted:

The hashtag #TrumpGreetingCards was born soon after. And people quickly got very creative.

There was truly something for every occasion.

A few even got other Trump family members and the GOP involved.

Many called on quotes or events from the President's own life.

While some mimicked the President's unique spelling style.

The 2020 election is 469 days away as of July 22. Whether or not President Trump will be forced to face a Republican primary challenger remains to be seen.

While not officially a Trump brand product, you can get 10 very Trumpy birthday cards here. 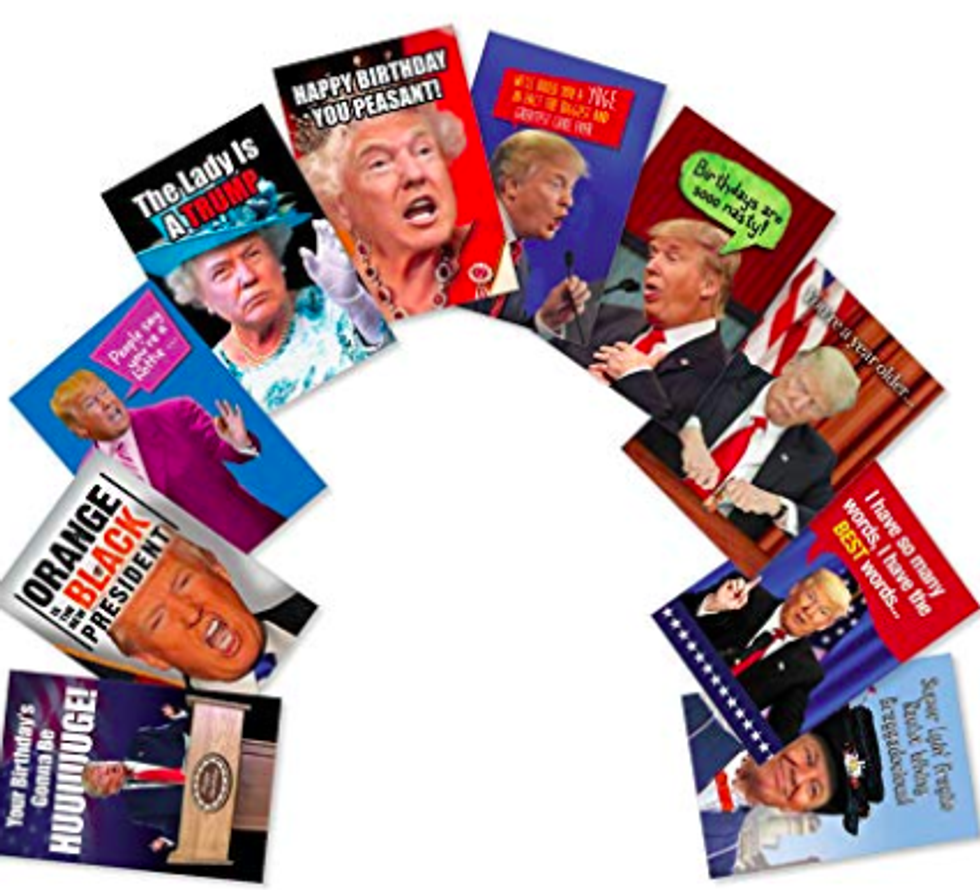 The goal of the force is to protect United States assets in outer space from foreign rivals and is slated to cost around $2 billion in the next five years.

Today, Trump unveiled the official logo for the Space Force, but people think it bears a striking resemblance to another iconic symbol.

People were stunned this past July when President Donald Trump tweeted that four Congresswomen of color—Reps. Ilhan Omar (D-MN), Alexandria Ocasio-Cortez (D-NY), Rashida Tlaib (D-MI), and Ayanna Pressley (D-MA)—should "go back" to where they came from.

He also falsely claimed they "originally came from countries whose governments are a complete and total catastrophe..."

Three of the Congresswomen were born in the United States. Omar was a refugee from Somalia. All are Americans.

At a campaign rally days later in North Carolina, President Donald Trump mentioned Congresswoman Omar—and got a strong reaction from the crowd.

While bigotry is common at a Trump rally, it became even more blatant when Trump's supporters began chanting "Send her back," echoing the calls from Trump's tweet for them to "go back" to where they came from.

Fox News Is Covering Trump's Impeachment Trial in the Most Fox News Way, and People Are Calling Them Out

As Democratic House impeachment managers make their case against President Donald Trump, one of his favorite news networks is going to lengths to keep the bevy of evidence against him from reaching their viewers' ears.

At first, Fox News tried scrolling Trump's so-called accomplishments alongside live video of the historic proceedings. Now, the network's latest attempt to distract from the Democrats' arguments is raising eyebrows even higher.

Lieutenant Colonel Alexander Vindman was one of the first witnesses in the House of Representatives' initial impeachment inquiry into President Donald Trump.

The administration of President Donald Trump relies on its white Evangelical base to keep its support consistently hovering around 40 percent.

In keeping with this, President Donald Trump often invokes anti-abortion values he claims to hold dear. He's falsely claimed that Democrats are determined to rip babies from their mothers' wombs and that parents often discuss with their doctors whether or not to keep the baby...after the baby is born.

These claims are patently false, but they rile up the base.

Education Secretary Betsy DeVos seems to be playing right along in promoting abortion hysteria, if a recent speech is any indication.

After hours of evidence presented by the House Impeachment managers in the Senate trial against President Donald Trump, Senator Lindsey Graham (R-SC) strayed even further into the abyss of fanaticism as he defended the President to reporters.

Graham, a Trump critic turned ally, didn't attempt to refute any of the myriad evidence laid out by Democrats, but instead dismissed the claims that Trump did anything wrong when he withheld congressionally approved aid from Ukraine in exchange for an investigation into his political rival.