FBI's Comey Stands By Decision As Trump Unloads and Unravels 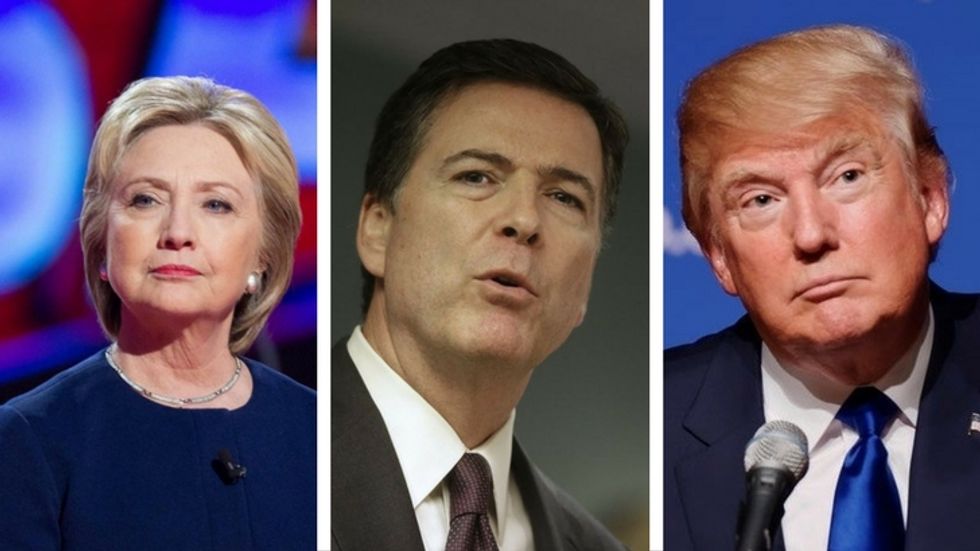 The Trump campaign struggled to respond to the latest twist in this unprecedented election as FBI Director James Comey said he stood by his decision not to pursue the case against Clinton. At a speech in Sterling Heights, Michigan, Donald Trump suggested once again that there was a conspiracy operating against him, while his campaign manager, Kelly Anne Conway, who had been effusive in her praise of Director Comey just a week ago, now awkwardly asserted that Comey had mishandled the investigation from the get-go.

"Right now, she's being protected by a rigged system," Trump told a crowd of supporters at the Freedom Hill Amphitheater. "You can't review 650,000 new emails in eight days — you just can't do it, folks. Hillary Clinton is guilty."

The latest twist is likely to dominate the news cycle in the final days and give encouragement to Clinton supporters who had seen polls dip when the new investigation had been announced. Still, Clinton spokesman Brian Fallon said her campaign was confident nothing would change.

We were always confident nothing would cause the July decision to be revisited. Now Director Comey has confirmed it https://t.co/BMQQx9eRzw
— Brian Fallon (@Brian Fallon) 1478463517.0

Markets and the dollar were also bouyed by the news overnight. The Mexican peso surged for the first time in nearly a month, and in early Monday morning trading in Tokyo, the peso jumped 2.2 percent to 18.6009 per dollar. The US dollar also spiked as news of the FBI's announcement broke, gaining 1.1 percent against the yen and 1 percent against the Swiss franc.

Trump's claim that there were 650,000 emails is incorrect: That was the total number of files on the laptop seized in a separate investigation involving former Congressman Anthony Weiner, the estranged husband of Clinton aide Huma Abedin, and it is unclear how many emails were related to Clinton. Reports indicated that many of the emails on the laptop were, in fact, duplicates of correspondence the FBI had already examined. NSA whistleblower Edward Snowden weighed in, saying the FBI would have been able to figure this out in a matter of hours. Snowden also explained how to sort through the duplicates in response to a tweet from Jeff Jarvis, professor and director of the Tow-Knight Center for Entrepreneurial Journalism at the City University of New York’s Graduate School of Journalism:

@jeffjarvis Drop non-responsive To:/CC:/BCC:, hash both sets, then subtract those that match. Old laptops could do it in minutes-to-hours.
— Edward Snowden (@Edward Snowden) 1478481549.0

Many wonder why Comey released any information on the investigation before the FBI had even reviewed the docs to see if there was anything there at all. According to individuals familiar with the case, FBI officials stumbled across the emails weeks ago but did not brief Comey on the development until Thursday, October 27. Some pointed out that announcing the discovery of the emails ran contrary to department policy as potentially interfering in an election.

One of Comey's more vocal critics was President Barack Obama,

Former Attorney General Eric Holder also criticized Comey's action in a scathing op-ed for The Washington Post published last Sunday. The FBI, wrote Holder, “has a practice of not commenting on ongoing investigations. Indeed, except in exceptional circumstances, the department will not even acknowledge the existence of an investigation. The department also has a policy of not taking unnecessary action close in time to Election Day that might influence an election’s outcome. These rules have been followed during Republican and Democratic administrations.” He further noted that the rules “aren’t designed to help any particular individual or to serve any political interest.” Instead, they “are intended to ensure that every investigation proceeds fairly and judiciously; to maintain the public trust in the department’s ability to do its job free of political influence; and to prevent investigations from unfairly or unintentionally casting public suspicion on public officials who have done nothing wrong.”

"While the original letter should never have been sent so close to an election, the expeditious review of these emails should put to rest––once and for all––the irresponsible speculation indulged in by the Trump campaign and others," Rep. Adam Schiff, the top Democrat on the House Intelligence Committee, said. "Voters can now make their decision based on the merits, and that decision should be simple: it is the choice between a woman superbly qualified to be commander in chief, and a man patently unfit for office."

The news appears to have eased tensions within the Clinton camp with just one day to go until the election. Clinton herself was on board her campaign plane when the news broke and did not respond to a reporter who asked whether she had seen Comey's letter shortly after landing. In response to Comey's disclosure, Clinton communications director Jennifer Palmieri told reporters, “We are glad to see that [Comey] has found, as we were confident he would, that he has confirmed the conclusions that he reached in July and we are glad that this matter is resolved."

It is unclear how many early or absentee votes the non-scandal may have affected. According to a senior Democrat close to the Clinton campaign, internal campaign polling found that some independents and Republican women withdrew their support for Clinton after Comey's initial announcement. "It opened a wound that cannot be quickly healed," the Democrat said.