Even in Utah, Congressman Came Home to Angry Overflow Crowd 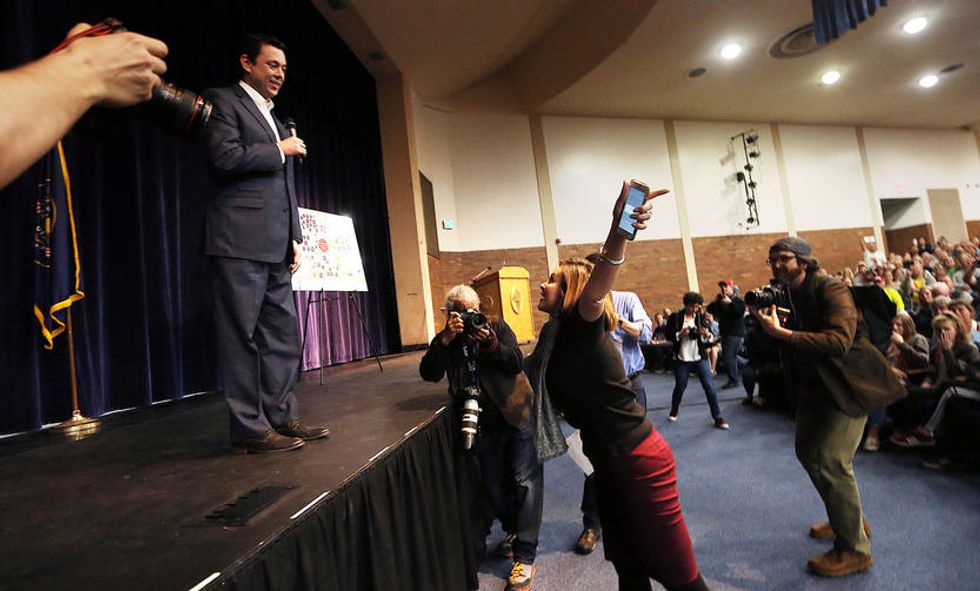 Rep. Jason Chaffetz (R-Utah) held a town hall in his home district last night and came under fire for resisting calls to investigate President Donald Trump's international business empire and its myriad conflicts of interest. As the chair of the House Oversight Committee, Chaffetz is perhaps the government official with the most power to check Trump's vast potential to use the executive office to enrich himself and his relatives. (Earlier this week, Chaffetz admitted that Trump would not let him discuss his ability to investigate the administration for breaching ethics. “Before my bum even hit the chair, the president said, ‘No oversight. You can’t talk about anything that has to do with oversight,’” Chaffetz said.)

More than 1,000 people showed up at the town hall in Cottonwood Heights, a Salt Lake City suburb, to question Chaffetz on his failure to investigate Trump. Chaffetz has not issued subpoenas, has not called for hearings, and scheduled no meetings to discuss the president's abuse of office. In fact, the 43 items on a proposed two-year agenda for the House Oversight Committee includes, according to Washington Post reporter Tom Hamburger, "a look at District of Columbia spending, cyber security policy at federal agencies and reform at the Office of Government Ethics, which had previously been critical of Trump’s failure to divest himself of potential conflicts."

Videos of the event show Chaffetz found himself booed by a crowd that filled the 1,080-seat venue nearly to capacity, with many more protesters outside.

The crowd of protesters also shouted down the fire marshal who locked people out of the event despite a few remaining seats in the back rows.

Chaffetz drew applause when he noted that earlier on Thursday, the House Oversight Committee called on the Office of Government Ethics to recommend disciplinary action against Kellyanne Conway, counselor to the president, after she encouraged Americans to purchase Ivanka Trump’s products on national television. (A regulation from the Office of Government Ethics bans federal employees from endorsing products or companies and prohibits the use of public office for the personal gain of oneself or friends and relatives.)

The crowd was less enthused, however, when Chaffetz said that the law does not require President Trump to release his tax returns: "You're really not going to like this part: The president under the law, is exempt from conflict of interest laws."

Chaffetz's critics were quick to note that Chaffetz was relentless in his investigation of the executive branch during President Barack Obama's tenure and that he was an instrumental figure in the investigation over Hillary Clinton's role in the Benghazi scandal. By contrast, Chaffetz maintained as recently as two weeks ago that he wasn't going to investigate Trump's conflicts of interest, saying, during an interview with the House Oversight Committee, he was “not interested in engaging in fishing expeditions” over Trump. Chaffetz's steadfast refusals prompted one town hall attendee to demand he explain his "line in the sand" for Trump.

Chaffetz ended the town hall 40 minutes early and left. He refused to take questions from the press. Protesters outside the venue promised Chaffetz he would hear from them again.

#Chaffetz town hall post-game: Protesters who couldn't get in are still outside chanting "we'll be back!" and "inve… https://t.co/GsLxHeBTIN
— Eric Bradner (@Eric Bradner) 1486697456.0

Chaffetz is not the only Republican to face large crowds of left-leaning constituents in his district. A Grand Rapids, Michigan, town hall with Rep. Justin Amash drew 600 people. Amash stayed late to answer questions. Questions about the Affordable Care Act caused tensions in the room to flare.

When Paul Bonis, the former President of Spectrum Health Blodgett Hospital in East Grand Rapids, told Amash that, as a cancer survivor, he is "scared to death" of a full repeal of the law, his comments received impassioned applause. Amash drew boos, however, when he stood by his call for a full repeal and replacement of the law, saying that the ACA has "hurt a lot of people."

"I have never seen our country more divided," Bonis said later. "Everybody's in their own corner, and they're kind of yelling at each other across the room. Nothing is ever going to get done that way."

Other members of Congress have opted not to meet with their constituents at all. Rep. Mo Brooks (R-Alabama) called off a town hall with a tea party group after Democrats tried to attend. Rep. Lee Zeldin (R-New York) canceled a town hall scheduled for April after more liberal constituents pledged to show up. Rep. Jimmy Duncan Jr. (R-Tennessee) has decided to cancel town hall meetings altogether. Constituents requesting a meeting with the Congressman received letters informing them of his decision.

“I am not going to hold town hall meetings in this atmosphere, because they would very quickly turn into shouting opportunities for extremists, kooks and radicals,” the letter reads. “Also, I do not intend to give more publicity to those on the far left who have so much hatred, anger and frustration in them.”