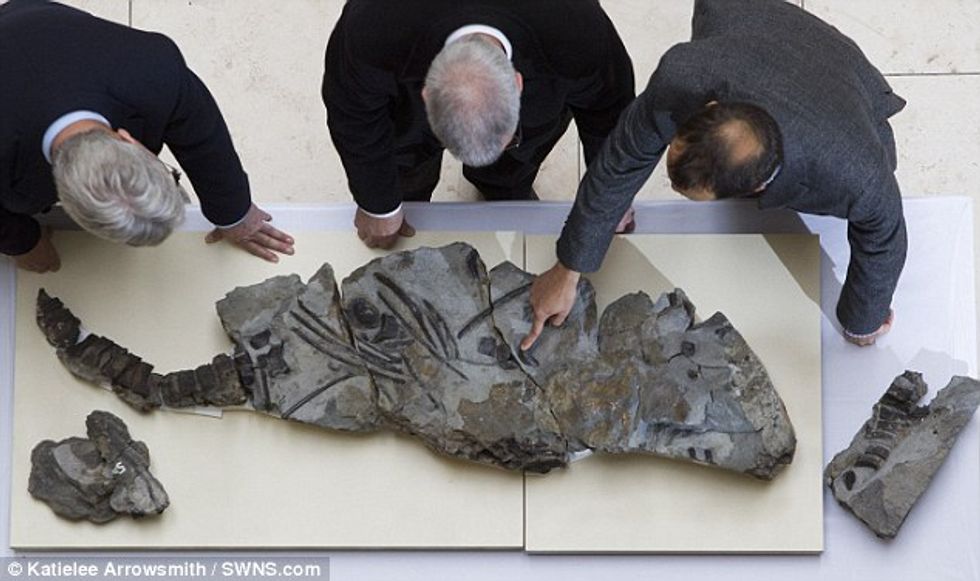 Scientists unearthed a 245 million-year-old fossil of a pregnant prehistoric marine reptile in southwest China. The long-necked dinocephalosaurus lived millions of years before dinosaurs and may change our understanding of the evolution of vertebrate reproductive systems. The find is discussed in an article published last month in the journal Nature Communications.

The dinocephalosaurus resembled the fictional Loch Ness Monster. It was about 13 feet long, with a slender neck roughly the size of a grown woman. It had paddle-like flippers, a small head, and a mouth full of teeth built for catching fish.

Although the dinocephalosaurus swallowed its prey whole, scientists are convinced that the creature inside the belly of the beast was not the remains of a meal, but the creature’s fetus.

“We were so excited when we first saw this embryonic specimen several years ago but we were not sure if the embryonic specimen is the last lunch of the mother or its unborn baby,” said Jun Liu, a paleontologist from the Hefei University of Technology in China, and co-author of the study. “Upon further preparation and closer inspection, we realized that something unusual has been discovered.”

The researchers were able to determine the specimen was an unborn baby through a number of means. The fetus had the same long neck as the mother, and was facing forward. If the animal had been swallowed, one would expect it to be swallowed head first. But the most dramatic clue was the shape. “The embryo was curled,” said Liu. “If an animal is ingested by something else, there’s no way to preserve that shape.”

This magnified photo of a fossil shows an embryo inside an ancient marine reptile. (Credit: Source.)

The finding is remarkable because it indicates that the dinocephalosaurus gave birth by delivering live babies, rather than laying eggs. This would make it the first known member of the vertebrate group known as archosauromorphs to do so. Other archosauromorphs include the egg-laying birds, crocodiles, and dinosaurs. Up until now, it was thought that archosauromorphs were incapable of live birth. This discovery changes that.

“Egg laying in the group that spans crocodiles to birds is not a deficit of their nature,” said Kenneth Lacovara, a professor of paleontology and the dean of the School of Earth and Environment at Rowan University in New Jersey. “It appears to be a strength. The alternative was possible, but that was not selected for.”

Lacovara called the finding “extraordinary” because it shows how “evolution never really obtains the optimal solution. It obtains the best solution possible based on the current situation.”

Live birth is linked with animals that genetically determine the sex of their offspring, rather than through environmental factors like nest temperature. These traits tend to be associated with animals making the move from land to sea. It appears that the dinocephalosaurus was fully marine, which gave it certain advantages. Most importantly, it did not need to leave the ocean to lay eggs on land. This gave added protection to its eggs and young hatchlings, which otherwise would be exposed to land predators.

The transition from land to sea has happened multiple times during history, usually during periods of mass extinction.

“The world in which we live right now is continuing to evolve and change,” said Michael Caldwell, an expert in extinct marine reptiles and the chair of the biological sciences department at the University of Alberta. Today’s reptiles will likely experience their own environmental and evolutionary pressures as a result.