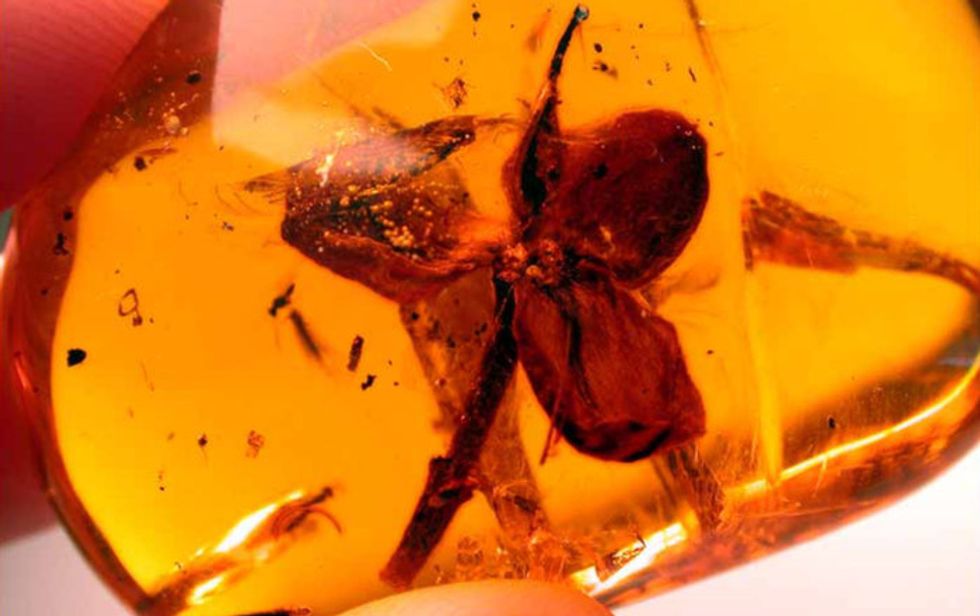 Researchers have found seven tiny flowers preserved in amber that look like they were “just picked,” but it turns out they date back to the Cretaceous period.

Oregon State University’s College of Science examined the 100-million-year-old blooms, the largest collection of that age to be examined at one time, and determined they were perhaps knocked off a tree in Myanmar by a Triceratops or Tyrannosaurus Rex.

“The amber preserved the floral parts so well that they look like they were just picked from the garden,” said George Poinar Jr., professor emeritus at OSU’s College of Science, in a statement. “Dinosaurs may have knocked the branches that dropped the flowers into resin deposits on the bark of an araucaria tree [a genus of evergreens, which includes monkey puzzle trees], which is thought to have produced the resin that fossilized into the amber. Araucaria trees are related to kauri pines found today in New Zealand and Australia, and kauri pines produce a special resin that resists weathering.”

The flowers, which measure approximately 3.4 to 5 millimeters in diameter, were determined to have come from a tree in the Cunoniaceae family. The researchers were able to identify them based on an earlier examination of flowers, Tropidogyne pikei, found in amber from the same area.

“The new species has spreading, veiny sepals [the green, leaflike structure on the outer side of the petal], a nectar disc, and a ribbed inferior ovary like T. pikei,” said Poinar. “But it’s different in that it’s bicarpellate [having two carpels, or female reproductive structures], with two elongated and slender styles, and the ribs of its inferior ovary don’t have darkly pigmented terminal glands like T. pikei.”

The researchers found that the closest living relative to the Cretaceous flowers, which they named Tropidogyne pentaptera (“penta” for five and “ptera” for wing, to denote its five sepals), is C. gummiferum, known as the “Christmas bush,” due to its flowering around Christmastime. The bush, whose flowers also feature five sepals, is found in Australia.

Though it may seem odd that both Cunoniaceae and aruaucaria are found on the island of Australia while the flowers themselves were found in Myanmar, it’s important to remember the supercontinent Pangea, which existed during the late Paleozoic and early Mesozoic eras, had broken up and was beginning to drift apart in sections during the Cretaceous period. The section called Gondwanaland once contained both Australia and greater India.

“Probably the amber site in Myanmar was part of Greater India that separated from the southern hemisphere, the supercontinent Gondwanaland, and drifted to southern Asia,” said Poinar. “Malaysia, including Burma [now Myanmar], was formed during the Paleozoic and Mesozoic eras by subduction of terranes [fragments of the earth’s crust] that successfully separated and then moved northward by continental drift.”