The Victims of Pompeii Cast in a New Light 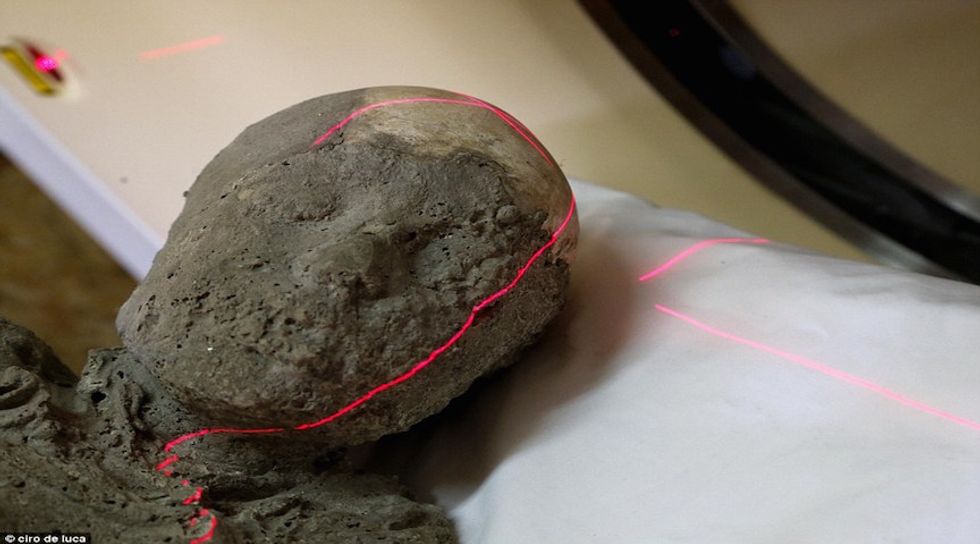 An interdisciplinary team of scientists has begun scanning the 1900-year-old remains of the victims of Mt. Vesuvius in Pompeii. Although the first scans began in September, the team has already uncovered a wealth of information.

When Mt. Vesuvius erupted in 79 AD, it buried Pompeii under 30 feet of pumice and ash. With time, the ash hardened and the former denizens’ bodies decomposed, leaving pockets of human-shaped voids in the ash.

The perfectly-preserved city was abandoned until 1748, when a group of explorers began excavating the site. When they discovered human remains below the surface, excavators set about trying to preserve the bodies. They poured plaster into the voids, making lifelike casts of the perished victims. The plaster preserved facial expressions and clothes as if time had stood still.

In addition to preserving the victims’ external features, the casts enabled archaeologists to move victims from the site and preserve their remains from disintegration. However, they also precluded scientists from being able to analyze the organic human material, such as teeth and bones.

Until now. With the help of a CT scanner, scientists can now, for the first time, see inside the casts.

By doing so, a multidisciplinary team of researchers – including archaeologists, restorers, radiologists and anthropologists – hope to get a better idea of how ancient Romans lived. “It will reveal much about the victims: their age, sex, what they ate, what diseases they had and what class of society they belonged to,” said Massimo Osanna, the archaeological superintendent of Pompeii. “This will be a great step forward in our knowledge of antiquity.”

One surprising discovery already made is that ancient Pompeiians had excellent teeth, suggesting a healthy diet low in sugar. Orthodontist Elisa Vanacore, part of the Pompeii team, speculated that they “ate better than we did.” In addition to giving information about their diet, dental records will help determine the victims’ ages.

The scans are also calling into doubt some of the previous presumptions about the site. For example, one cast found in 1963 had been dubbed the “pregnant woman” because of its pronounced belly. The modern scan, however, revealed there was no pregnancy; further, the individual may not have even been a woman. “Any woman with a bit of a stomach is said to be pregnant,” commented Estelle Lazer, an Australian forensic anthropologist.

Despite the remains being nearly 2000 years old, the study of these preserved bodies can be “moving.” Said Stefania Giudice, a conservator from Naples working with the victims, “[I]t could be a boy, a mother or a family. It’s human archaeology, not just archaeology.”

Some of the more haunting plasters excavated include lovers entwined in a protective stance, and a four-year-old boy nested alongside his parents and baby brother. The boy was one of the first to be scanned.

The team hopes to perform DNA testing on 86 of the 100 plaster-enclosed bodies. Approximately 1150 bodies have been discovered so far – including dogs and pigs – with a third of the city yet to be excavated. An estimated 10,000 and 25,000 residents of Pompeii and nearby Herculaneum were killed in the eruption.

The information gleaned from the scans and testing will be analyzed and published later this year, giving us an unprecedented glimpse into the lives of these victims. As Ms. Lazer stated, “Now we have a chance to get to know who they really were.”