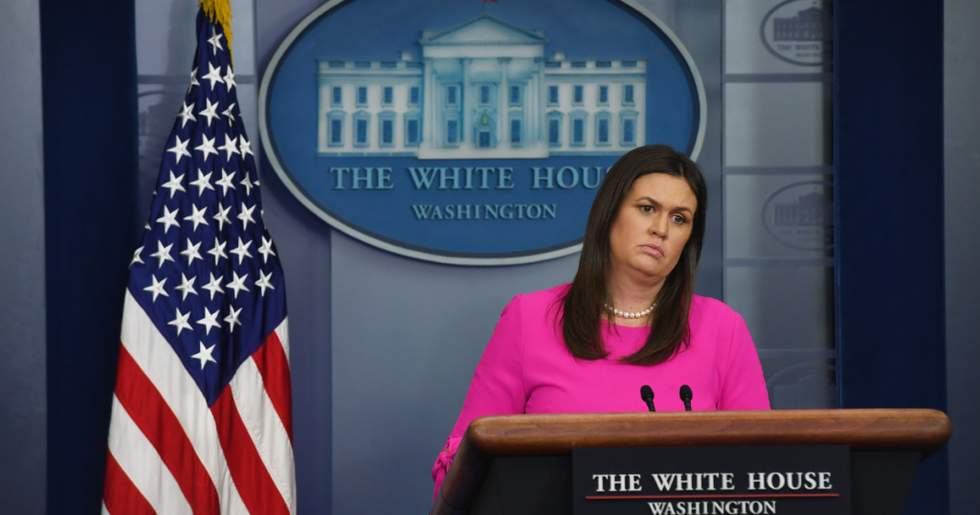 The Trump administration hasn't held a press briefing since December 18th of last year, and has only conducted five of what—in previous administrations—were daily briefings.

After people began noticing that White House Press Secretary Sarah Huckabee Sanders hadn't addressed reporters from the podium in over a month, President Donald Trump admitted on Tuesday that he instructed Sanders not to hold press briefings because of the way Sanders is covered in the media.

Early Tuesday morning, Deputy White House Press Secretary Hogan Gidley said that Sanders would return to the podium "when she finds a reason to do that."

Gidley told Fox News' America's Newsroom: "It’s not that they’ve ever stopped, it’s just that sometimes we need to come to the podium to communicate things and sometimes we don’t."

The last briefing was held on December 18 and was only the fifth appearance by Sanders at the podium since August.

Less than an hour after Gidley's statements on Fox News, Trump wrote on Twitter he told Sanders "not to bother" holding briefings because the media is mean, once again referring to news outlets as "fake news."

"The reason Sarah Sanders does not go to the “podium” much anymore is that the press covers her so rudely & inaccurately, in particular certain members of the press," Trump tweeted. "I told her not to bother, the word gets out anyway! Most will never cover us fairly & hence, the term, Fake News!"

Sanders has had a bristly relationship with reporters due to her willingness to lie on behalf of Trump. Many feel that Trump's White House is the biggest source of fake news around.

@realDonaldTrump You and Sarah are responsible for some of the worst fake news out there. The two of you ought to… https://t.co/XczwZQzpeT
— Carol Dodd (@Carol Dodd) 1548171623.0

@realDonaldTrump I prefer that Sanders doesn't do pressers any longer. All she does is lie. Picture by @JimCarrey.… https://t.co/imLKYxlaxK
— Jeffrey Guterman (@Jeffrey Guterman) 1548171821.0

@realDonaldTrump The reason she doesn't go to the podium is because she is a lying coward. The press rightly calls… https://t.co/ni0QQxydA7
— Donna Tavoso (@Donna Tavoso) 1548180106.0

Sanders collects a taxpayer-funded salary of $179,700.

Thus, people are understandably frustrated that Sanders is still getting a paycheck for doing nothing while 800,000 federal employees are being forced to work for free as Trump's third government shutdown slogs into its 32nd day.

Why keep Sanders around if her job is unnecessary, some wonder.

@realDonaldTrump Sir, your press secretary still collects her salary even if you tell her not to "bother" to do her… https://t.co/lIn3P8uWBm
— Jennifer Taub (@Jennifer Taub) 1548171660.0

@realDonaldTrump So let me get this straight - @PressSec gets paid for not doing her job because reporters doing T… https://t.co/E9rnMiqbTc
— KCShowMeDemocracy (@KCShowMeDemocracy) 1548180466.0

Gidley added that "a lot of the times when we don't come to the podium it’s because the president has addressed the American people himself."

"It’s kind of ridiculous, you can’t win for losing half the time," he said. "But the fact is, when the president isn’t going up we have a conversation about the message we deliver, and Sarah Sanders will absolutely be back at the podium talking to the press and delivering the message to the American people."

Gidley also said Trump was the "most accessible president in history," which the White House Correspondents' Association said was almost true - Trump is second only to Ronald Reagan in terms of availability to the press.

⁦@realDonaldTrump⁩ is second most accessible President to the press since Reagan, according to research by respecte… https://t.co/tTcKwQIgyo
— WHCA (@WHCA) 1547392336.0

"It doesn’t necessarily mean Sarah Sanders needs to be at this podium every day when the president himself is talking to the American people," Gidley said.

Why Trump placed the word podium in quotes may forever remain a mystery.